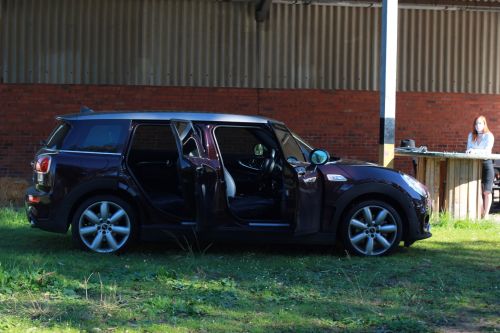 Mini forces me to swallow my words

The Clubman, first released in 2007 as a “supermini”, together with the Countryman, released in 2010 has always stood as an oxymoron for me. How can BMW and Mini brand their vehicles as the “not so mini, well Mini…”?

I firmly believed that Mini may have lost the plot and in essence, their own DNA and character. This question kept puzzling me, until I had the chance to test the brand new 2.0l turbocharged Clubman Cooper S.

Do you perhaps remember the 2003 version of the Italian job, where 3 supercharged Mini’s race through the underground water tunnels and Charlize Theron punches that guy from Fightclub? Or, if you are old enough, maybe the successful World Rally Championship campaign ran by this British outfit.

Both of these create an image of sportiness. I mean, three small cars, full of heavy gold loads, racing through a water tunnel, evading two greedy motorbikes, needs no further explanation.

So let’s turn our attention to the Clubman. Yes it might have the same frontal features as the normal Cooper, up to the B-pillar, but the rear barn doors makes for a head scratcher in terms of defining the type of vehicle it might be. Sure, it can’t be seen as a hatchback, but can it be defined as a station wagon? For sure, this can then not be seen as the famous sporty little traffic slicer?

I feel it necessary to surprise you, just like the Clubman surprised me. Yes, the interior feels like the cockpit of a Boeing 737. Combine this with the interior, similar to what I believe an Indian nightclub to look like, and you can easily get confused. Obviously I also have to mention the iconic ‘halo’ light, surrounding the LCD screen.

Personally, I struggled to keep my eyes firmly on the road at night time as this sharp light blinded my left eye. I have to add that the light texture as you change from ‘green’ to ‘normal’ and then to the dangerous ‘sporty’ setting can be quite nice.

Another negative, for me as a relative skinny person is the fact that my buttocks may get mutilated when climbing into the rear passenger seats. There are also a few blind spots, especially on the A-pillar. Secondly, a central bar, linking the two rear barn doors, also create a blind spot, especially when the middle head cushion is raised. A fitted rear camera for any reverse action makes up for this.

Soon all of this fades away as you take ride comfort, the sporty nature, as well as the practical interior, into account. Like stated previously, a 2.0l turbocharged produces 141kW and 281Nm. What follows can just be termed as ‘fun”. This positive soon runs into a negative, in terms of your fuel economy and relaxed passenger.

A whirring exhaust system, combined with the sound of the turbo, even in normal mode, creates tremendous excitement. This happens as droplets of fuel are being dropped onto the warm exhaust when you lift off the accelerator.

Together with higher engine revolutions and the whistle of the turbo, you may tend to fall into an irregular driving rhythm, just to accelerate and lift off. It is not difficult to state that BMW themselves, may have had an input in this.

You might just start to believe yourself driving a Jaguar F-type through the Alps. It has to be added that for a front wheel drive, this mini has the ability to be quite nifty through sharper turns.

Mini took away the flappy-paddle gearbox, but through this, created a very clever sequential gearbox, a field in which many other manufacturers may have stumbled over. Just shift the gearbox handle to the left and manoeuvre the gear lever forwards or backwards with a single ‘palm’ gesture and you will soon start to feel like a world class rally driver.

Ok, but I have been focused on the sporty facts for too long now, just like the driving experience itself. Truth be told, when you eventually return to a normal state of mind or get a vicious hit from your passenger to bring you back to reality, you will soon find the Mini to be as quiet and relaxed as sporty. Switching the car setup back to normal or ‘green’ and allowing the gearbox to run through its 8 gears at low revolutions, will give you a smooth, quiet and soft driving experience.

The automatic remote rear doors, will also provide for efficient loading and unloading. There will also be 460l of space, increasing to 1361l as soon as you fold the rear seats. There is even more space underneath the cardboard platform, should you choose to hide the Christmas presents you just bought. I enjoyed the rear, boot doors, visioning myself kicking the barn doors open and rolling out in an attempt to create an action scene. Just prepare for the fall. It may be higher than you think from the boot platform to the ground.

In conclusion, the Clubman made quite an impression and made a stark contradiction to my previous belief. Mini haven’t lost the plot at all. Yes the standard and smaller mini may be in great demand in the smaller, monocentric city structure of Europe, but it also has to be realised that South-Africa/America have very different and dispersed city structures, thus creating very different demands on vehicle size. Still, these demands are not taking away the DNA of Mini.

It has to be realised that although the design makes the Clubman look big, it is shorter than a normal family sedan. With a pricetag of N$380 000, it definitely be seen as value for your money as it ticks every box for being a small, spacious, practical and fun city slicker as well as a long road adventurer for a family of 5.