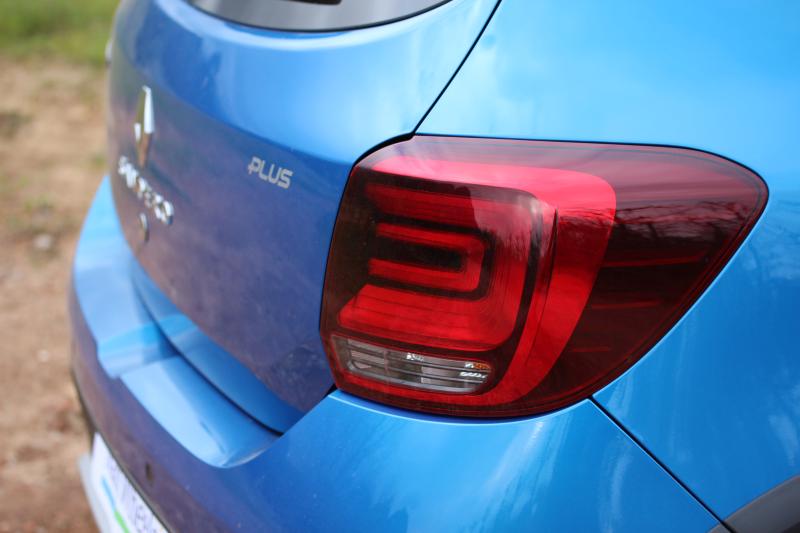 Renault is a strange old brand. It started just a few months shy of the year 1900 and has always danced to its own tune. They’re reasonably big on motorsport but never bothered much with luxury cars. At some point they aced all EuroNCAP crash tests but still focused on affordable transport for the masses; like this Sandero Stepway. 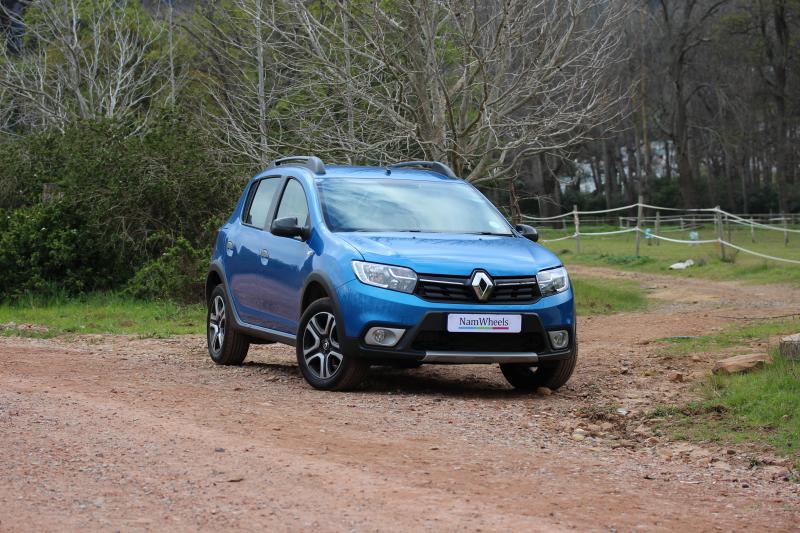 In fact, they really meant business in the late 90’s and purchased a controlling stake in the Romanian Dacia brand; builders of fine people’s cars which included old Renault models. This new marriage allowed Renault to re-badge and sell the cheap ‘n cheerful Sandero in export markets like ours. 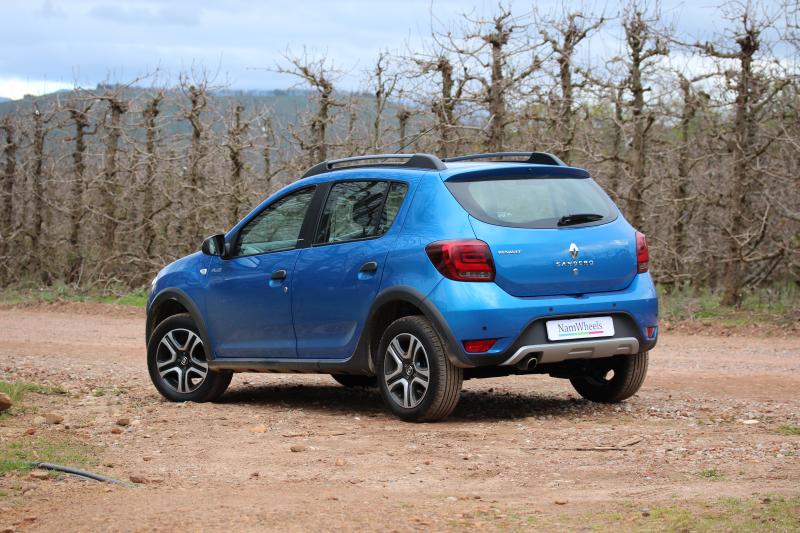 Sandero was born in 2007, with the slightly raised and plastic-clad Stepway models appearing a little later. Generation two arrived in 2012, complete with Stepway and turbo-power. Where before beat a naturally-aspirated 1.6L petrol heart with about 85hp, the new model kicks out 90hp from a 900cc turbo-petrol three-cylinder. 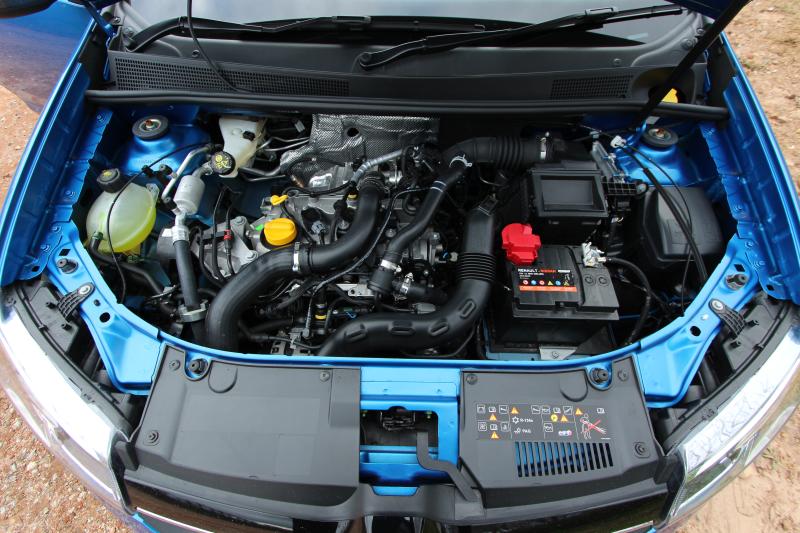 I’ll dive right in by proclaiming that I didn’t like this engine’s power deliver during my few test days with our metallic blue press unit. At times it feels messy, suddenly abrupt and certainly not linear. There’s a fair amount of usable mid-range urge (max. 135Nm) in most of the five forward gears; just stay above 1,500 and below 5,000rpm. 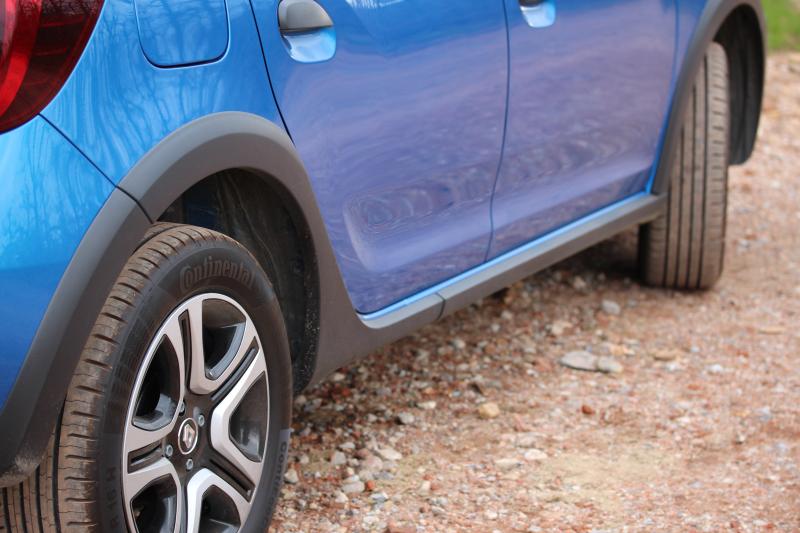 My next critique is an absentee red-line on the rev counter and only through brazen intent did I find a lackluster rev limiter around 6,000rpm. Another omission is a coolant gauge, although a red light is provided for when it’s too late. Also, after two days and 200km of driving, the fuel gauge hadn’t moved… 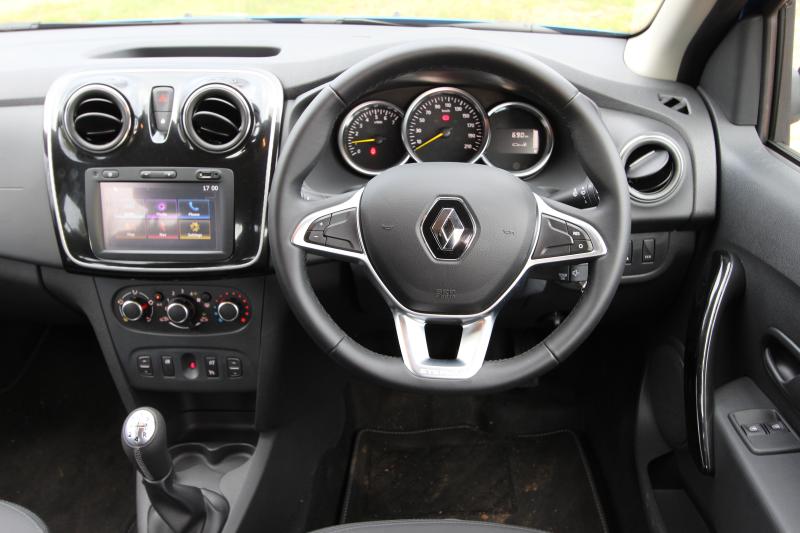 At first I thought it was the car’s stellar fuel consumption (Renault claims 5.4L/100km from the 50L tank, we averaged eight) but it may have been a rather optimistic fuel sensor and/or gauge. Other than that, I liked the simple instruments with their yellow needles and small trip computer. 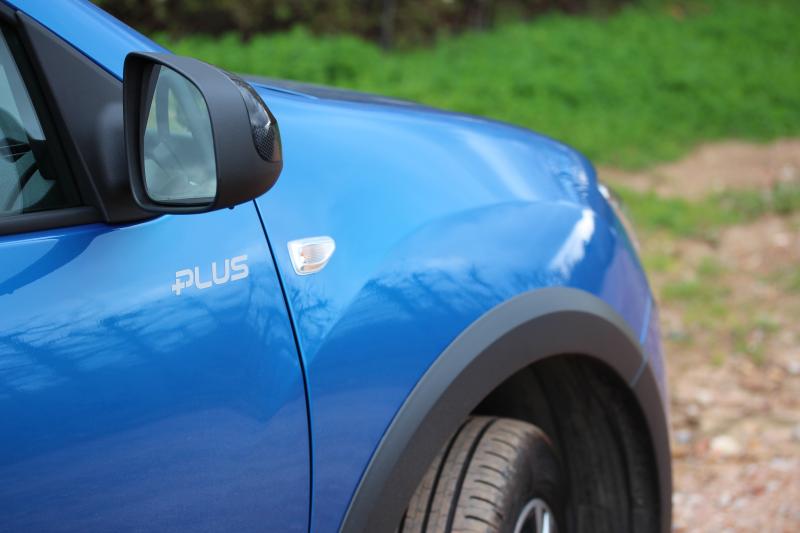 This mixed marriage of niceties and oddities continues throughout the vehicle and will now be hurled at you in rather random sentences. The indicator stalk self-cancels a bit late and steering feel is rather vague for my tastes but the turning radius is excellent! 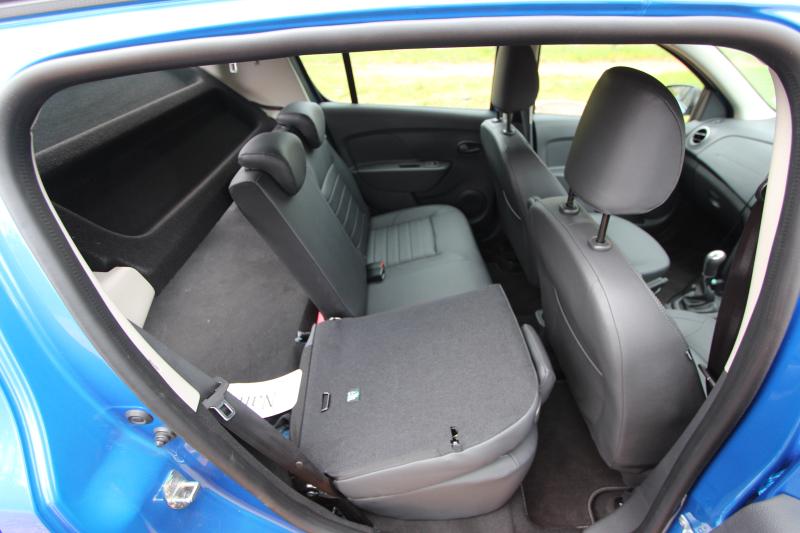 Stepway also has badly-placed rear seat belt catches and an awkward driving position due to the steering wheel only adjusting for height and not reach. Cabin materials are kinda low rent, their leather look is not very convincing. The basic ventilation controls work well. 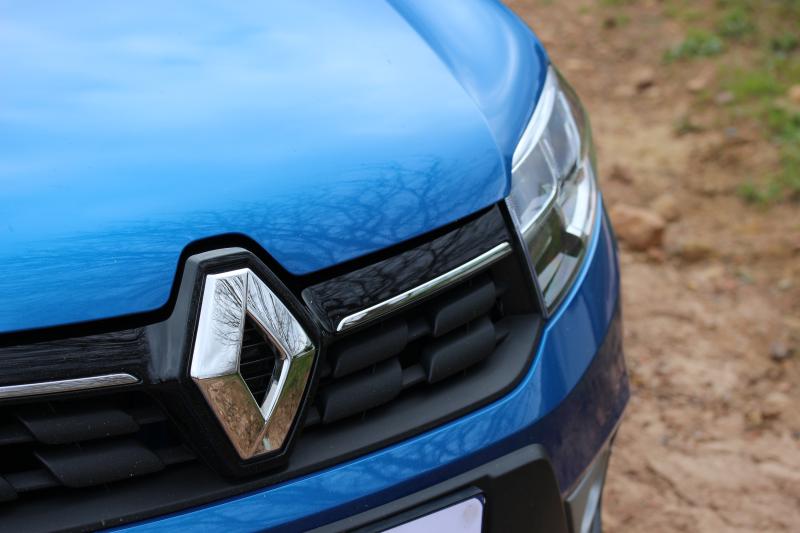 A highlight is the big touch-screen media system whose operation is fairly simple; except that Bluetooth pairing was far from intuitive. I couldn’t get the navigation to activate and the extra Renault audio stalk on the steering column helps with simple media commands; especially on bumpy and busy roads. 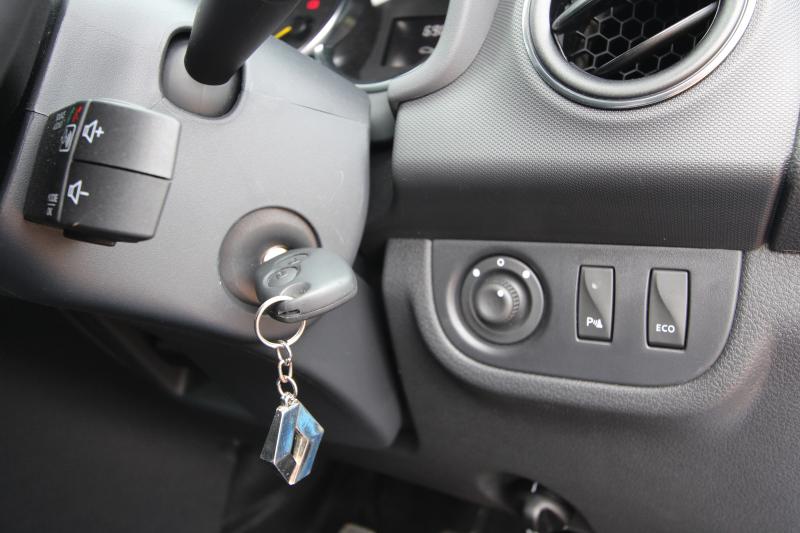 Sandero’s speakers are average and so are the main beams (“brights”) of the otherwise acceptable headlights. The hatch / lid can only be opened with the car’s key but as an upside that should curb any hit ‘n run opportunity theft. The 292L boot is acceptable for this class and the rear seat backs fold over in a 60/40 split fashion. 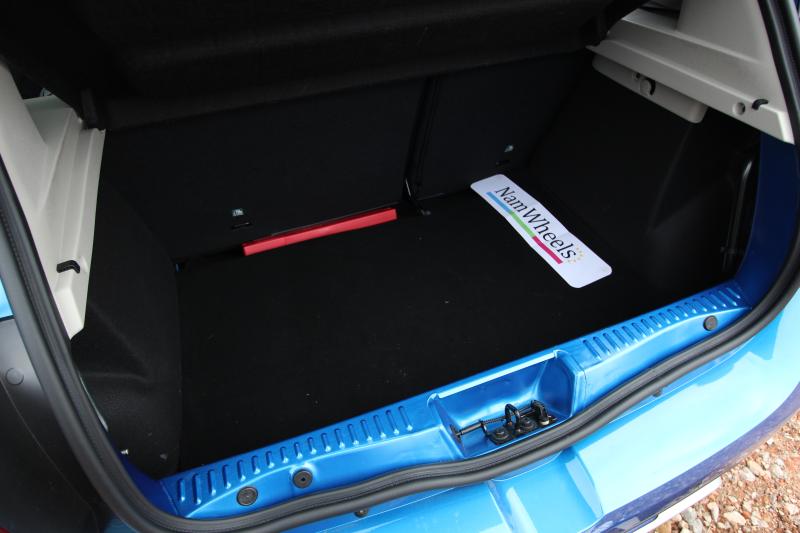 The Stepway features snazzy two-tone alloy wheels with excellent 205/55R16 Continental tyres but bizarrely, the spare wheel was a Barum 195/65R15, which is only marginally smaller and clear proof of the car’s humble Sandero roots. Same for the power window switches – two on the front doors, two on the dashboard… 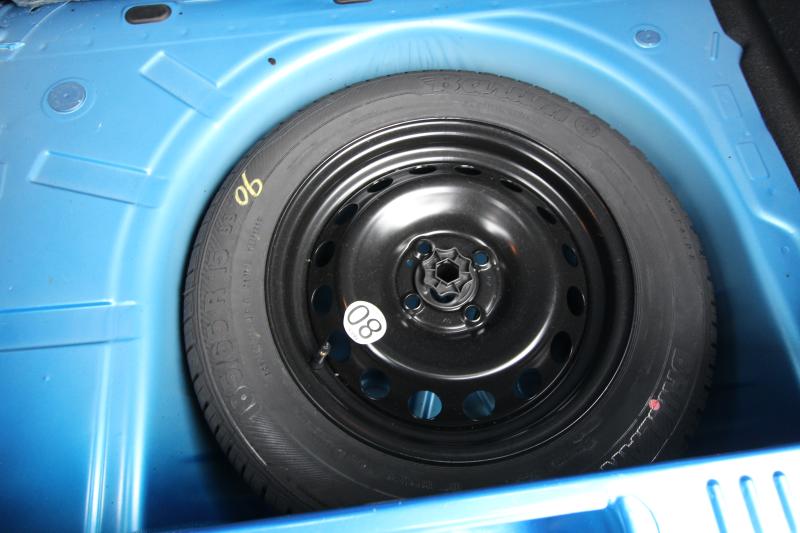 On the upside, those abovementioned Contis contribute towards this car’s comfortable and predictable ride. The suspension may be comparably basic but flattened out our favourite bumpy roads to a very high degree of smoothness. The flipside is substantial body roll and eventual ESP intervention during fast cornering. 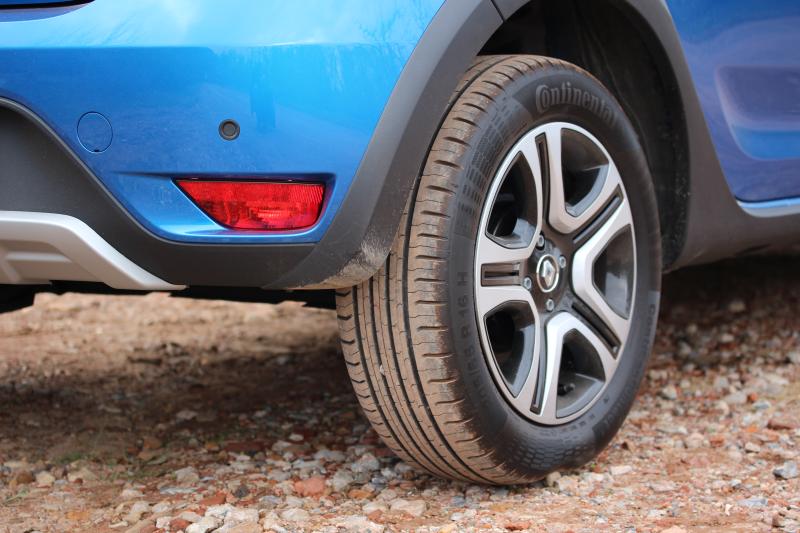 Ground clearance is 193mm and the Stepway even has a gas strut for its bonnet; something a R700,000 Mercedes bakkie doesn’t. Other standard features include ABS brakes and traction control, power steering, remote central locking and a reverse camera with parking sensors. 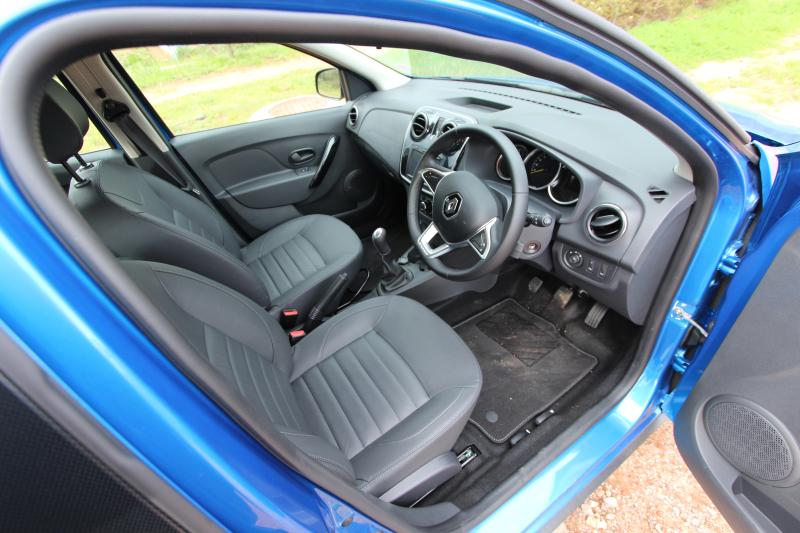 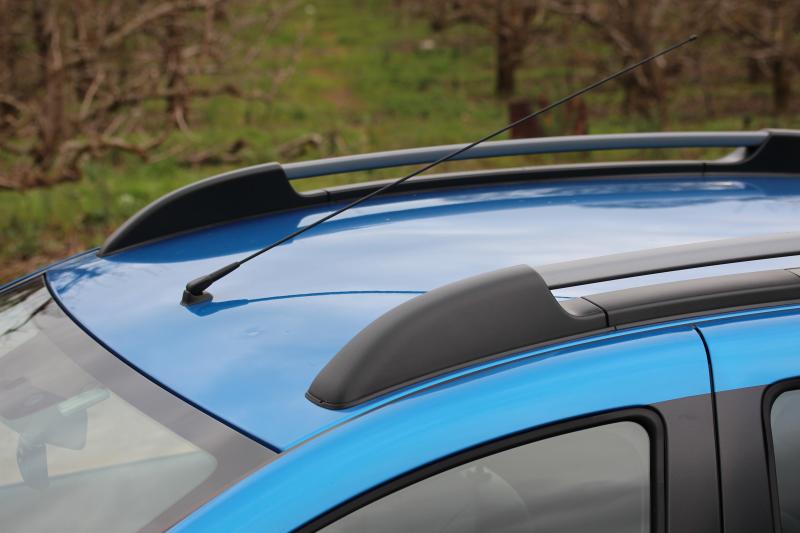 That confirms – as mentioned before – the strange union of affordable mediocrity and efficient modernity, most certainly due to the extra goodies fitted to each Stepway Plus model. At about 200k, this city crossover is excellent value and comes with a 5-year/150,000km warranty and a 2-year/60,000km service plan. 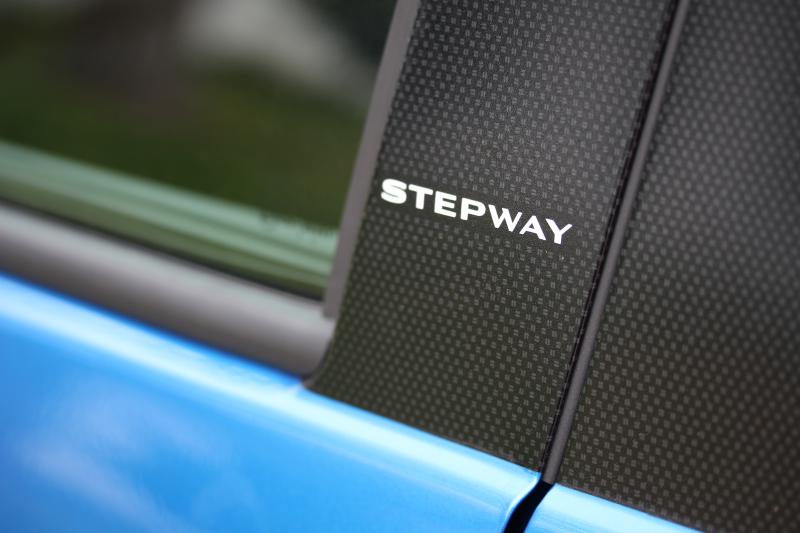