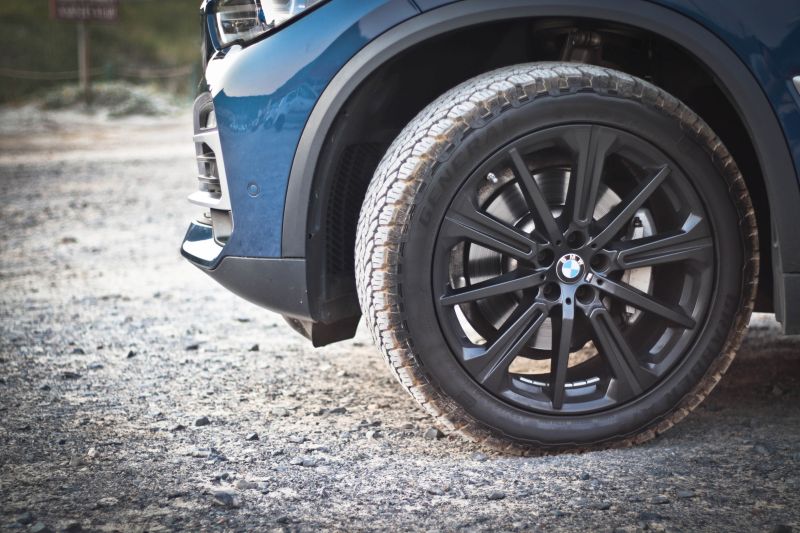 BMW’s popular X5 was a pioneering SUV, or SAV (Sports Activity Vehicle), as the Bavarians like to call it. This all-new, fourth generation is caringly nicknamed G05 and I recently took one for an extended spin.

With more than 2 million sales under its belt, the X5 is a winning recipe. It may be shy on hard-core 4×4 gear but has always been big – really big – on driving enjoyment and performance. Not much has changed in that department but BMW South Africa gave our blue test car some lekker tekkies to improve its off-roading abilities.

I suspect that was a result of the recent press launch where, I am told, the big and brash SUV’s were put through their paces. For the record, the knobbly but low-profile rubber fitted here was General Grabber AT3 of the dimension 275/45R20. It’s a bizarre look, especially on that hideous trend of black alloys.

Some observers noted that the X5 is even more aggressive and over-styled than ever before. I’ll let you be the judge of that. What nobody could deny was its size; not only in terms of passenger room. The 650L boot swallowed four big suitcases and I got sweaty palms in the airport’s rather tight multi-story car park.

Once free of the airport, on a few highways and byways the chunky tyres revealed some annoying vibrations. Someone had already attempted to correct the imbalance (with silver weights on those fugly black rims) but to no avail. A few dirt roads, pavements, farm tracks and ditches presented no problem to this X5.

Quite the opposite. Press a few of the countless buttons and the car lifts its skirts while optimising the drive train response to whatever terrain you choose. You can also count on anything up to 620Nm from the brawny 3L i-6 turbo-diesel being sent through a slick eight-speed gearbox to an intelligent all-wheel drive system.

BMW claims average fuel use of 7L/100km from the 80L fuel tank which gives you a theoretical range of 1000+ km. Our mixed route average was closer to 10 but I hasten to add that, thanks to that mountain of torque and good gear ratios, seven should be absolutely plausible on a steady cruise to your holiday destination.

And the flipside of that?

Floor the beast and it should hit 230km/h; or reach 100km/h in 6.5 seconds. Our best was 6.9. Although most drivers noted a rather wonky ride (especially in Comfort mode), the new X5 actively works with its air suspension for the best ride at all times. This vehicle’s brakes also deserve a special mention…

Despite wearing a set of mud-plugging boots, this 2,185kg car stopped from 100km/h in 3.44 seconds and 44.91 metres. On wet tarmac. All this is a testament to four generations of SUV perfection, and is also tangible in the great interior quality, dazzling laser headlights and thumping Surround 7 sound system.

I’m still getting used to the new, fully-digital BMW gauge cluster because the old round dials were such a classic Beemer hallmark. Sad face emoji. That also applies to the annoying (but de/selectable) driver aids and infuriating ignition. Even when you’ve switched the engine off, exited the vehicle and closed your door, the music is still blaring inside.

It only shuts up – finally – when you lock the car. How stupid is that?

Other negative notes tell of the shiny wood veneer in this test car, multiple USB-C sockets but no traditional USB slots, plus a rather steep learning curve for the audio system and countless infotainment menus. On the upside, it offers multiple vehicle / interior settings, every conceivable media input and even a live concierge service.

All of this can be expected for the asking price of R1,253,196 but I have to caution prospective buyers against costly extras; some of which may have been mentioned above.