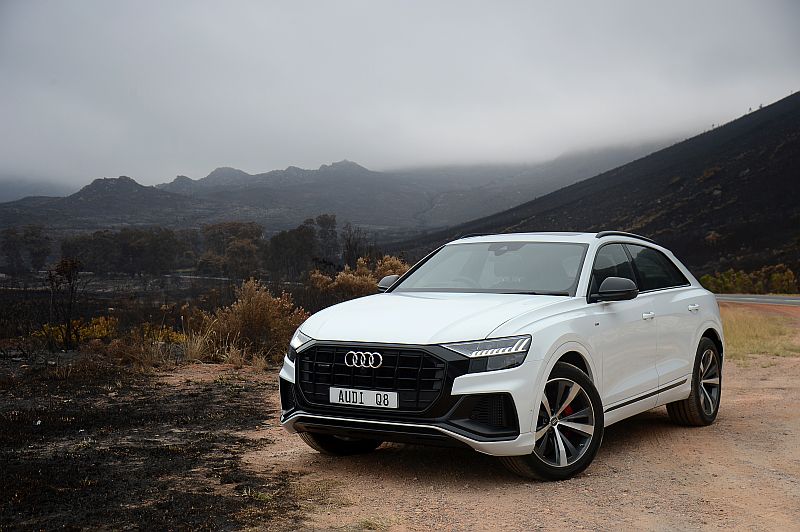 Hypocrisy can be a tough nut to crack. Usually I would fly into a spitting rant about cars like the Audi Q8 but just a few hours behind the wheel left me completely smitten. I hate everything it embodies but it never put a wheel wrong. It’s enormously ostentatious but so incredibly refined…

D’you see the problem I have?

No large Audi (or SUV, for that matter) has ever kept me awake at night but when a silver specimen appeared in my life, I found myself ogling it from every angle. And there are so many of them. Wherever you look, no matter what perspective you take, there’s a proportionate line or perfect crease in your view.

It’s much the same story on the inside, which I wanted to declare as Audi-generic and boring, yet every surface greets you with a tactile or visual treat. Sure, some people may prefer the more daring shapes of upstart brands but nobody can deny that this Q8 cockpit is one of the best in the business.

Oh, you know what else I dislike? “Four door coupés.” A coupé has two doors, anything else is just a saloon (or sedan) car but again, this silver press car soothed my rage when I operated any of its four pillar-less doors. On an SUV. Are you joking? How utterly pointless; but mildly exciting at the same time.

Next in my imaginary crosshairs are those three main screens; the super-sharp monitors which display (1) your gauge cluster, (2)  all manner of infotainment, as well as (3) climate and drive train controls. As I had previously mentioned in my Audi A7 review, this pixel excess would be deal breaker for me if they weren’t so darn good.

There’s a highly rewarding physical feedback on this new generation of Audi MMI screens which turns each click of the satnav into an experience. Sometimes I’d put in random addresses just to feel the gentle click-back of the main display. Which I still think is too big. Have I mentioned my current brawl with hypocrisy yet?

The next item I was gunning for was the vehicle’s drive train. Diesels leave me fairly cold but – again – the Q8 arrived with one of VW/Audi’s best power plants: their venerable 3-litre turbo-diesel V6. Ahh, but I hate DSG’s. Because they’re jerky at low speeds. Except that in this, hundreds of Nm’s almost completely eroded that sensation.

Dang. How am I supposed to hate this car?

I know… maybe for its air suspension. You see, over the years I’ve learnt that these adaptive chassis components have a certain lifespan and their replacement is eye-wateringly expensive. Which is a fraction of the car’s depreciation, to be honest, and the ride they offer is delectable and sublime and oh-so worth it.

OK, maybe it’s a gas guzzler? Nope, Audi claims average fuel consumption of 7.8L/100km and – as with every car we test – our results varied by about 15%. On top of that, each Q8 has a fairly large 75L fuel tank so the range is also excellent. Mhh, performance? Try again… our best 0-100km/h time was 6.87 seconds at sea level. Audi claims seven.

It doesn’t matter which attribute I pick, the pointless Q8 just keeps fighting back. And winning. Despite weighing 2,145kg, a single emergency brake test took just 2.79 seconds and 36.39m. Those are sports car values! The car’s extremely big but easy to enter or exit. Bad visibility? This one had multiple cameras with a 3D mode! Those brash headlights are simply perfect.

Another thing I can’t stand is over-priced city SUV’s and, umm, have you seen the photos on this page? Audi’s Q8 must be near the top of a list marked “I want something brash that looks like a 4×4 but will never see more than a leafy puddle!” It’s wasteful and ridiculously expensive. But you know what? It did all the mild off-roading in my daily life…

At some point I wanted to tackle a swamp and then throw our muddy dogs in the back but I realised that I would never do that with my own car… so this amazing Audi Q8 would’ve just suffered my hypocritical wrath. Despite my dislike of it (and others of its ilk) this vehicle just kept amazing me.

Sure, it’s hideously expensive and optional extras are a rip-off so maybe price is its Achilles’ heel? I even wanted to launch into Audi’s apparent depreciation issues but there’s a good spin to that too… in a few years, these will be pre-owned bargains. Just get an extended warranty for those air struts.