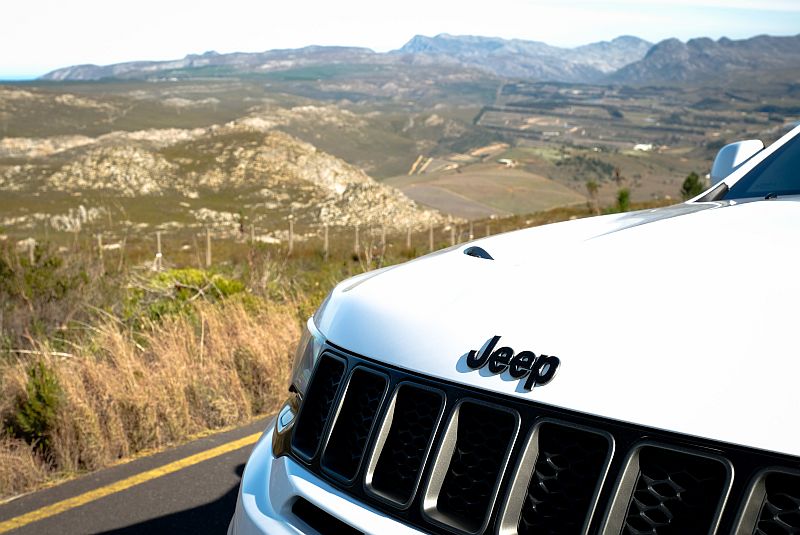 Up to this point in time, the most powerful car I’ve ever tested was a 6-litre twin-turbo V12 AMG Coupé which put out a colossal 612 horsepower and did 0-100 in a shade over four seconds. Both those figures have now been beaten… by an SUV from America.

I’ve never thought of Jeep as a performance brand, even when they brought out the monstrous Grand Cherokee SRT-8 a few years ago. Same goes for Land Rover / Range Rover, I suppose it’ll take a whole generation before our (my?) deeply-rooted images of mud-plugging 4×4’s is replaced by shiny rockets like these.

That, by the way, is a rather apt description of a 2020 Jeep Grand Cherokee Trackhawk: a shiny rocket. It also bears a few similarities to gravity-defeating explosive projectiles… like size, price and fuel consumption. I was going to type power delivery but they’re worlds apart. Let me explain.

Where a rocket takes a while to get going, the Jeep’s supercharger helps its 6.2L V8 petrol engine to instantly blast off the line. More like a bullet than a rocket, I guess. Rocket thrust also tends to be relentless and while I cannot fault the Trackhawk’s pace, its initial increase in momentum does let up at higher speeds.

Mind you, that’s only compared to stuff like Bi-Turbo AMG’s.

Apologies for jumping straight into the performance part of my review because – I’m simply assuming here – that’s pretty much all you’re interested in. To give you some cold, hard numbers, each Jeep Grand Cherokee Trackhawk has a 6,166cc vee-formation eight-cylinder petrol engine which is force-fed air by a … supercharger.

Using our dated but incredibly trust-worthy Racelogic PerformanceBox, we subjected this hard-working white press unit to two full-throttle sprints in opposite directions and the results were as follows: Run 1 was 0-100km/h in 3.83 seconds and run 2 took 3.78 seconds. 400m times were 11.89 and 11.81 seconds at 187.64 and 189.11km/h respectively.

So we didn’t quite hit the manufacturer’s claim but I’d like to put our results into perspective for you. For starters, I didn’t use the abrasive Launch Feature and secondly, the Trackhawk’s kerb weight is 2,431kg. The only vehicles (which we’ve tested) that beat its acceleration were the Mercedes-AMG E63 S 4Matic+ sedan and the AMG GT-S Coupé.

Just imagine that… pulling away from the lights in your AMG GT and there’s a Jeep keeping up with you.

In fact, the owners of the following cars will get a moerse skrik at the robot: the Audi TT RS, an Alfa Romeo Stelvio Quadrifoglio Verde, any Audi RS4 Avant, the Mercedes-AMG SL63 and Audi’s RS5 Coupé. They all trail the Jeep’s 0-100 time by a few split seconds and remember – those are just the ones we’ve tested.

It really is lunacy, this much power in an SUV. I would happily put up my hand and proclaim the Trackhawk to be overpowered and borderline useless because it didn’t take very long for me to become utterly scared of this monster’s potential and realise that it just serves a single purpose. Showing off.

Not since that aforementioned AMG have I had sooooo many new friends and neighbours asking for a ride. And thanks to the Trackhawk’s facial rearranging tricks, I was always happy to oblige. The results of these excursions are still being compiled in a video but – as they say on cooking channels – here’s one I prepared earlier:

I typed “useless” earlier because this vehicle started life as a big luxury SUV but has now become a big luxury SUV that can klap Porsches. Off-road? You must be joking. I did exactly what any Trackhawk owner would do, never went near so much as a dirt road and just roared, rumbled and whined around town.

Oh yes, have I mentioned the supercharger whine? Even when you’re gently coasting around town – because you realised that the lively fuel needle is connected to a 96L tank – the engine makes a faint buzzing noise. Give it 1/3 or half gas to hear a louder cry (and break the law) or floor it to unleash the full manic scream.

Sure, this can probably do superb dune-driving or some very calculated off-road manoeuvres but I wouldn’t risk those 300-kay-an-hour rated 295/45R20 Pirellis. And yes, you can load 782 to 1,554 litres in the cargo area or cruise in comfort with four passengers but what you really want to do is chase Ferraris.

Which you can, and that’s the completely silly but amazing calling card of a Jeep Grand Cherokee Trackhawk. And just for the record, I think that it’s quite the performance bargain at R2,199,000 because the equivalent AMG or Porsche SUV’s cost much more. And the Germans charge extra for tasty options.

Not so the good-ole yankee Jeep Trackhawk. It’s ready-made and even comes from the factory with a generous 3-year/100,000km warranty and superior 6-year/100,000km maintenance plan.