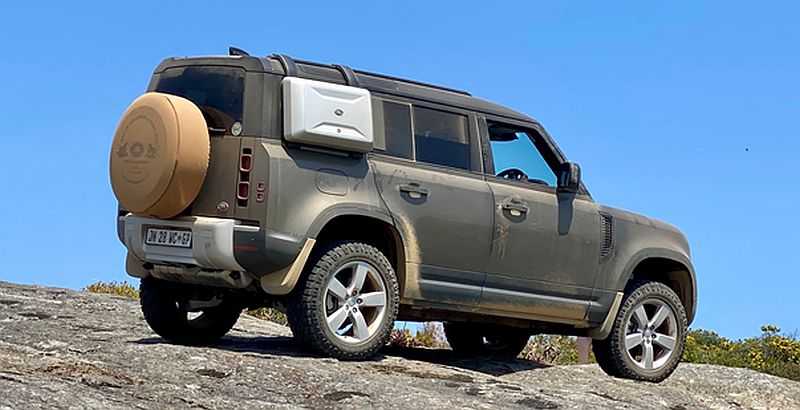 My Old Defender didn’t do that.. !

The slogan that carried my laughter, quoted many times by my co-driver Dieter Losskarn, throughout the three wonderful days we had with the Land Rover Mzansi Edge Expedition.

SA’s famous explorers, father and son Kingsley and Ross Holgate, are busy tracking the outline of South Africa in a 70 day, 10 000km “Mzansi Edge” expedition, with a humanitarian focus of distributing 200 000 meals to needy families, whether it’s close to wildlife parks or crèches and schools in rural areas. These can only be reached with extremely capable off-road vehicles, as some of the roads… well, you can’t actually see them and have to dig yourself!

The Holgates took delivery of two new Defenders to continue their journey and we were privileged to join #teamdefender together with other journalists on a 3-day excursion as part of their journey. Altogether, 11 new Defenders formed part of a convoy that started at Durbanville Hills.

On arrival, we were warmly welcomed by #teamdefender with a pair of locally-made Veldskoen shoes (rough leather shoes) for each participant. I thought to myself, this trip is going to be special and remembered for more than the Defender itself!

After meeting the whole team over a delicious brunch, I joined Dieter Losskarn in a new Defender P400S, at first as a passenger.

We convoyed out and slowly started making our way through traffic towards the backroads of Durbanville and headed for Wellington; and then Bainskloof.

Right from the start, the P400S communicated confidence on tarmac. An old Defender would probably reach some limitations at around 100-110km/h on the open road in terms of relaxation, but the P400S felt dynamic from the word go. It’s in a sense unfair for me to compare old versus new on tarmac. I can just imagine the die-hard old Defender crowd shouting! “A Defender is not for the road! It’s for everywhere else!” Sorry guys, but some moms in Stellenbosch drive to school and back.

Let’s leave it there. Appreciate y’all!

As traffic thinned out towards Bainskloof, we could occasionally open the P400S up, and wow!, the sound of that 6 pot petrol. It’s sublime! The first of many ‘My old Land Rover didn’t do that!’ remarks started.. especially the way Dieter uttered it! I cracked up every time. 294kW in a Defender, honestly! Is it really necessary though? Well, it’s the year 2020 and technology is almost ahead of time, so why not!

After a stop on Bainskloof Pass to re-group, we headed to Waverley Hill Wines for a quick bite; the food was ready as we arrived! While munching, our cars were re-ordered by team Defender, ready for us just to head out again. Even our air-cons were set as we got into our cars with the powertrains at temperature, ready to roll. We felt special and treated! Also, it was time for me to get behind the wheel of the P400S.

By default I will choose a diesel for any off-roading, but this power unit had me hooked from the start. A refined Defender? Yes, Land Rover did it. The brakes are also super sharp, but I soon calibrated and loved it the more I piled on the mileage.

It was time to hit the gravel, and explore today’s tech with regards to off-road options. In all honesty, though having driven various cars through-out South Africa, the UK and rest of Europe, I must admit that I won’t classify myself as an experienced off road driver with all the necessary papers. What I can say is that tomorrow’s tech in today’s Defender allows you to be a bit unprepared.

Again Dieter confirmed with his statement: “My old Defender didn’t do that!” It’s here where we might touch serious nerves of old die hard Defender owners… I can hear them mumbling, “well it doesn’t have a ladder frame and you can’t sling start it from the front without a battery!”

I actually adore those stories, and let’s keep them close at heart. For now, bear with us, as we reel in 800 km of experience with the new Defender!

The first night at Cederberg Park, Kromrivier was a night like no other. I was completely mesmerised by Kingsley’s campfire stories. Something that stood out for me, is that most people probably have some old Defender story they can tell.

I concurred myself: I met my wife on an excursion with an old Defender and a dog. I had to drive the Landy back from Uniondale to Knysna during the Karoo To Coast cycling race in 2004.

Her brother got stuck in Chad during a trip from the UK through Africa in 2001 with 09/11 when all borders were closed. They drove a Series-2 petrol.

After 5 000km, Kingsley and Ross expressed their appreciation of what a truly remarkable vehicle the new Defender is, especially straight off the showroom floor in stock form. I take their word as they shared real life situations like crawling up a 2 meter rock.

I was so looking forward to the next day!

The next morning, after another memorable breakfast, Kingsley led us out towards Grootkloof Primary school where we were going to serve the community. It was one of the best experiences for me on the trip, as we teamed up to carry food packs to the families.

Before we left for Lambertsbaai, we were treated with the Jerusalema dance, which this year will probably be remembered for around the world. On our way to Lambertsbaai for lunch, we stopped for a famous roosterkoek by De Tol farm deli across Piekenierskloof. Again, so much detail by #teamdefender with branded menus!

At Isabella’s at the Lambertsbaai harbor, we waved good-bye to the Kingsley crew as they went further on their trip for another 30-odd days.

The more miles we piled on, the more I felt one with the new Defender. Little details like rubberised compartments in the dash and the doors looked after our GoPros and phones with no rattles to record, even on gravel roads. (or as the Brits will say, unsealed back roads. 🙂

Paternoster welcomed us at the highly rated Strandloper for the second and last overnight halt until we headed back towards Cape Town. This place! Can it get better than this? I’ll be back with my wife and kids soon.

Heading back towards Cape Town, we took a detour to put a cherry on our cake; with a crawl up a formation of rocks… or was it one rock, the size of a Checkers Hyper! This time we had the pleasure of testing the D240 first edition. (177kW, 430 Nm diesel power-plant) At first I thought power-to-weight ratio is going to be on the wrong side of cruising effortlessly.

How I was proven wrong!

The reliable ZF gearbox that is serving many high-end brands, puts the power down in the most efficient way.

All systems go… with regards to tech that supported and covered up for me where I had no experience. You can drive the new Defender with the flick of a finger adjusting throttle on the steering, both feet off the pedals. When you engage ATPC (All Terrain Progress Control) it does most jobs for you while you enjoy your coffee with one hand on the steering wheel. It automatically maintains a set speed during off-road driving, maximising traction and allowing the driver to concentrate on the terrain and the vehicle’s course.

And guess what old Defender (we will always adore you!), the new monocoque architecture chassis makes the new Defender the strongest and most robust of the whole family. Old Defender crowd, please give the new Labrador the fair chance it deserves!

Cape Town, see you soon… and to conclude, your old Defender will always be remembered, but it has an incredibly talented offspring in the new Defender.