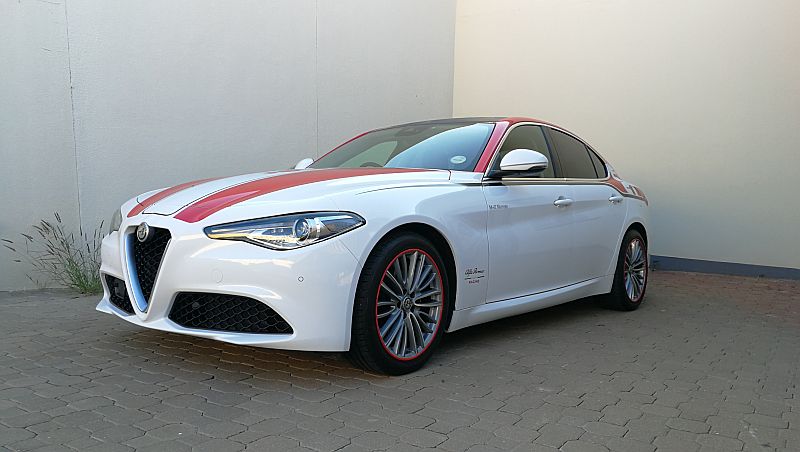 Is beauty a valid argument for buying a car? In our rugged Namibian environment with its even more rugged vehicles and drivers, we think that it certainly can be. A quick test of this Alfa Romeo Giulia proves that…

Let’s get one thing straight, Alfas are just beautiful. Full stop. Try to think of a single ungainly or ugly A.R. product and I’ll be happy to counter your argument. RZ? Nope, that’s a highly collectible classic. 155? Come on, what a DTM legend! Pre-facelift 147? Still better looking than a contemporary Hyundai.

I won’t drag this point any further than necessary as there are other attractive vehicles on the market, past and present. Yet Alfa Romeo is one of the very few brands which gets accepted (or in the very least, acknowledged) for its appealing designs. That almost puts them on the same level as Ferrari, Lamborghini and other exotic carmakers.

Sure, those countrymen have superior performance but spirited handling and (comparably) exciting power delivery have always been a hallmark of the cloverleaf products. And after just a short stint in the captain’s chair of this 2021 Giulia 2.0T, I can confirm that their ethos is still very much in place.

A 3-way drive mode even lets you choose between dynamic, natural (normal) and all-weather settings.

The 2-litre turbo-petrol power plant responds quickly, its 8-speed automatic transmission buddy is equally fast while the steering response is extremely crisp; erring on the side of nervous. Around town I also noticed a slight edginess of the suspension but this – together with the lively steering – will only be a problem for those who drive vague SUV’s or slushy saloons.

This Giulia’s combination of agitated responses makes it a permanent delight for the enthusiastic driver, especially on a dreary work commute or lengthy country drive. And there’s plenty of power to play with. Our best 0-100km/h test run (at Khomas altitudes) was a GPS-confirmed 8.27 seconds. Alfa claims 6.6.

A few years ago we performance-tested a similar model at sea level and it managed the 0-100 sprint in seven seconds flat. That may seem like a vast difference but it’s fairly negligible in the greater scheme of things because, besides the thinner air of Windhoek, this boldly-wrapped example wasn’t quite run in yet, wore fatter tyres and drank inferior petrol.

The most important bit – at least in my humble opinion – is how the vehicle behaves in everyday situations, pulling away from a light, accelerating through its mid-range power band or safely overtaking on a highway. In this regard, again, tested in our speed-bump infested capital, this Alfa Romeo never disappointed.

You may think that eight gears are excessive but the joy of having almost double-digit cogs whirring beside your left leg is that the powerful engine always finds the right ratio to move you along. At any speed. Its maximum torque figure of 330Nm already comes on song from 1,750rpm while power (147kW) only drops off after 5,000rpm.

Which means that you can either ride a wave of low-rev torque or punch your way towards the 5,500rpm redline. There’s a wonderfully grainy thrum to this force-fed four pot and, much like sporty old BMW’s, under hard acceleration this willing motor will venture past the first few markings of its red zone.

It all adds up to an exhilarating and dynamic package.

Oh, have I mentioned the brakes yet? Again, the pedal demands a gentle touch if you’re not used to its sharp reactions. This gives any driver the confidence that your Giulia Super will stop as well as it goes, should the situation demand it. Our test car’s four disc brakes were hiding behind intricate multi-spoke wheels with red pin striping.

We even found a fairly large boot (480L), four spacious and comfortable seats and a sporty instrument cluster with an intricate trip and information display. The Alfa Romeo infotainment system isn’t everyone’s cup of tea but I found that a few rounds of practice made it just as easy to operate as those in most competing sedans.

A few things we should caution fellow Namibians about is the handsome Italian’s low front apron and overall ride height, low-profile tyres and the obviously low dealer count. Its maker also alleges that this model will only use around 5.9L/100km from the generous 58L tank but we suspect that it will only be possible on a steady cruise.

Most of the time – trust me on this – you’ll use more fuel with a fat grin on your face.

Typing of which, the Alfa Romeo Giulia 2.0T is not just a pretty face. There’s a properly engineered and jolly involving automobile behind all those striking lines, attractive light clusters and sexy curves. So if they are the only reason you want this car, you have my wholehearted approval.