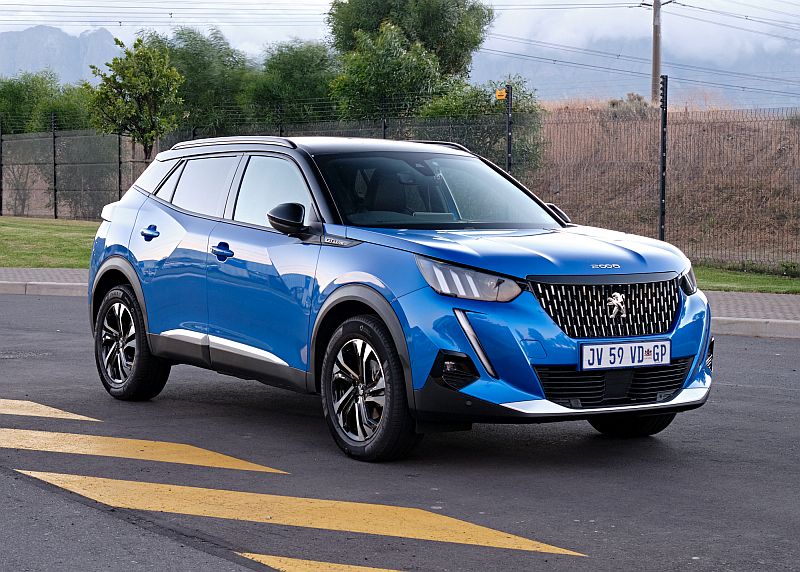 In what was usually reserved for its French sister company Citroën, Peugeot jumped onto the sub-compact crossover SUV bandwagon with immense verve and quirkiness. This “B-segment” 2008 is closely related to the Opel Mokka, Opel Corsa (and Peugeot 208) as well as the peculiar Citroën DS3 Crossback. Surprise, surprise.

Only available with a front (transversely-mounted) turbo-petrol engine and front wheel drive, this five-door jacked-up hatchback is perfect for city commuting and mild rough-roading alike. In fact, our vibrant blue metallic press vehicle had me looking for AWD switchgear (and rear drive shafts) because it offered a selection of drive modes.

This is nothing new in a two-wheel-driven vehicle; or those with adaptive all-wheel-drive. The engine, gearbox and traction control are simply agitated to whatever level is required – low gears and high rpm for sand, slightly more lenient settings for rocks and full stability alert for that slippery white stuff.

Up to 96kW of power is provided by a 1.2L in-line 3-cylinder turbocharged petrol engine and while that sounds a tad underwhelming, its maximum torque figure of 230Nm is much more like it. This twisting force comes on tap from a reasonable low 1,750rpm onwards and can be used in up to six forward gears of the fairly smooth automatic gearbox.

That puts it in our top 10 brake tests.

Oh dear, have I been blabbering on about specs all this time and not mentioned the looks yet? Holy baguette, Yvette, this is one seriously stylish machine. I’ll immediately throw in my two cents by proclaiming that it isn’t blessed with perfect proportions, plus the bloated front end follows today’s angry-face design trend.

But the rest of it – especially the detail – is breath-taking. Those lion-claw LED running lights and the multi-faceted headlights, that 3D radiator grill or bizarre flank profile, plus a pair of tail light clusters that look like a modern art installation. Did I mention the chunky silver skirts, stylised exhaust tips and sharp bonnet creases yet?

If that doesn’t bowl you over, the 2008’s cabin most certainly will. It is so unusual, almost alien, that I highly recommend you explore my following observations for yourself: the tiny (and oblong) steering wheel is off a TV game, its dashboard doesn’t have a single straight line, while the seats are upholstered in what looks like a designer hotel’s curtain material.

I’m not done yet. The fully digital and fully far-out 3D holographic instruments float far above the steering wheel with a sun/vanity surround that could win a sculpture prize. A driver-focussed infotainment screen matches the aforementioned dials for (adaptable) hue and weirdness, with a counter-angled row of hexagonal chrome switches.

Still not finished. Behind that row of chunky UFO controls is a set of touch-sensitive shortcut keys. Below that is a wireless phone charger tray; with its own piano black lid which doubles as a phone holder. Large areas of the dashboard and door cards are decked out in an exposed weave texture while a surprising amount of surface joins are trimmed with bright green stitching.

See what I mean with the quirkiness? Doug de Muro almost exploded when he got near a “Poo-shjaw” 2008. A lot of new car designs impress me, especially if manufacturers blend daring shapes with sensible ergonomics, but this swivel-eyed Frenchmen felt like someone had thrown me the key to a genuine motor-show concept car.

Does that mean it’s all show and no good? The short answer is “no” and the more I thought about, there isn’t much of a long answer to change that opinion. Yeah, some people won’t dig the driving position with that tiny attempt at a wheel between your legs, nor will everyone fathom the many onion layers of the various display options.

But this new Peugeot drives, steers, rides, handles and – as we learnt earlier – brakes exceptionally well! The gearbox does the best with whatever its force-fed little host can muster up, all to the happy off-beat strum so indicative of a three-pot motor. As with any of its rivals, cargo space and urban fuel use could be better…

To sum up, the Peugeot 2008 is not just a stylish grimace stuck onto a quirk-fest. It has respectable features, desirable qualities and a high degree of mechanical and digital refinement. This top-of-the-line GT model costs about R480,000 but cheaper (and less powerful) versions are also available with a 5-year/100,000km warranty and 3-year/60,000km service plan.