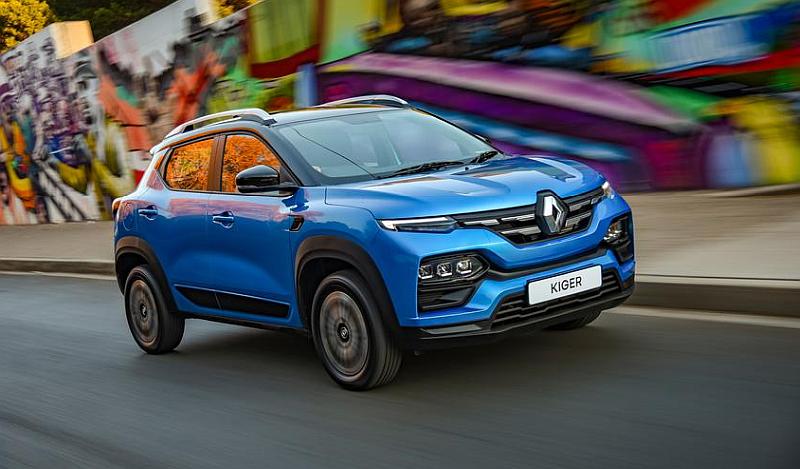 One of our least-favourite cars in 2021 now comes with the dreaded CVT ‘box of many revs, no gears and plenty whining. Can it get any worse?

Yes. Yes, it can. Believe it or not, the Kiger can be had as a manual, this CVT “X-Tronic” or – Heaven have mercy on all of us – an automated manual transmission. In principle, it’s the basis for the much (over-) hyped DCT type of ‘boxes as they use twin clutches and a supremely clever robotic system to seamlessly shift gears for you.

But the automated manual transmission (AMT, for future warnings) is a cheap, rudimentary, robotic manual gearbox. According to our local car historian, it’s been around for many decades and even made a strong case for itself in the late fifties and sixties… to no avail. The unpredictability of this device is simply too great.

A few years ago we tested the cheaper Kwid model with an AMT and I distinctly remember the shenanigans of negotiating a long steep hill. With its throttle pedal firmly pinned to the floor board, the little 1L engine would redline second gear, hiccup as the robot got third, run out of puff in third, hiccup, back to second, repeat ad infinitum…

Think of it as someone else changing gears for you. But, instead of doing it with the amazing experience of a well-programmed automatic, never mind a true auto’s smoothness, there’s a mechanical gremlin who operates the clutch and gears on your behalf. Like a drunken passenger during a debauched student night.

I guess it’s a viable alternative for someone who can’t (or prefers not to) drive a manual Kiger, but then I would rather champion this CVT model. Pardon all the explanations, but CVT stands for continuously variable transmission which uses a system of belts to create infinite gears; and noise. Renault says it says five gears, but they are merely simulations.

There are no unexpected gear changes of the neck-snapping type, nor will you look down at the gear lever and yell “now, gremlin, now!” Instead, you get lacklustre starts and what feels like a single, never-ending, rubbery gear. Because that’s essentially what it is. Need more speed? Here, have more revs.

Again, this type of power transmission is a decent substitute for buyers who shy away from manuals, plus it trumps that AMT malarkey. Petrol-heads tend to hate this cog-less CVT but I always hasten to explain that it’s the most efficient way of getting engine grunt to the wheels… and in the case of this Kiger, you can happily opt for a manual if you like!

This fact was very endearing to me, after the confusion of why they would build two differently terrible types of automatic transmissions as well. The Kiger itself also has a few problems in my humble opinion but let’s just treat it as that: my opinion. Compared to its latest relative, I would recommend the latter: click here.

The ridiculously large and scratchy cubby hole I complained about might just be the perfect size for someone’s bag. And who knows, perhaps there’s someone out there who actually hates cup holders and instead requires a handful of shallow or odd-shaped cabin trays. Oh, and mood lighting.

Another highlight I quickly want to throw into this review is the fully-digital instrumentation – yes, the gauges are a screen – which you can even customise by choosing one of the Kiger’s well-defined drive modes. It’s one of the features it has above its abovementioned cousin; although the main dial needle vanishes during mode transitions.

Renault’s 1-litre 3-cylinder turbo-petrol engine puts out remarkable numbers for its size: 74kW (100hp) or 160Nm but most of these peak in the higher rpm range. And “peak” is the most fitting description as this engine’s power delivery graph probably looks like the silhouette of a mountain range.

The CVT manages to disguise some of this lumpy forward momentum so I imagine that the clumsy AMT will produce some proper bucks and jolts in combination with this engine. Back in everyday suburbia, the Kiger CVT has most of what modern buyers require: a fair amount of mid-range grunt to pull you along.

Highway driving, overtaking or full-throttle antics are not its strength, although we did record some decent performance figures: our best 0-100km/h time took 11.33 seconds, which isn’t bad for a tiny 1L turbo city SUV with a toothless transmission. Renault doesn’t publish performance figures or top speeds for the Kiger.

During performance testing, we topped out around 145km/h so a conservative estimate would be about 160km/h. With bleeding ears. Stopping from 100km/h took 3.5 seconds and 48.84 metres… below par for the segment but OK-ish for a budget beater. The affordable MRF Wanderer tyres might be to blame.

Cornering is, umm, well, interesting. The Kiger quickly produces substantial body lean because its suspension is set up mostly for comfort, rough roads and wheel articulation for off-roading. Hence, I will forgive it leaning over and squealing its cheapie tyres… but have to caution younger drivers that it lacks modern safety nets!

You do get four airbags, stability control and ABS brakes with EBD but strangely, no traction control. Mind you, that’s utterly superfluous in a 1-litre CVT car… What I’m trying to say is that Renault has put in as many electronic helpers as they could (at this price point) but the car’s tyres and suspension will not put up with silly driving antics for very long.

So there you have it. In my often irrelevant opinion, you can get better value and technology elsewhere.

But I will concede that this Kiger is a funky looking machine with good ground clearance, loads of cool goodies and some bizarre features. And if you really want a toothless Indian-made French car with useless interior door handles, concealed front seat belt catches, barbed wire on the steering wheel and a cacophony of scratchy storage trays… this one costs around 300,000 bucks.