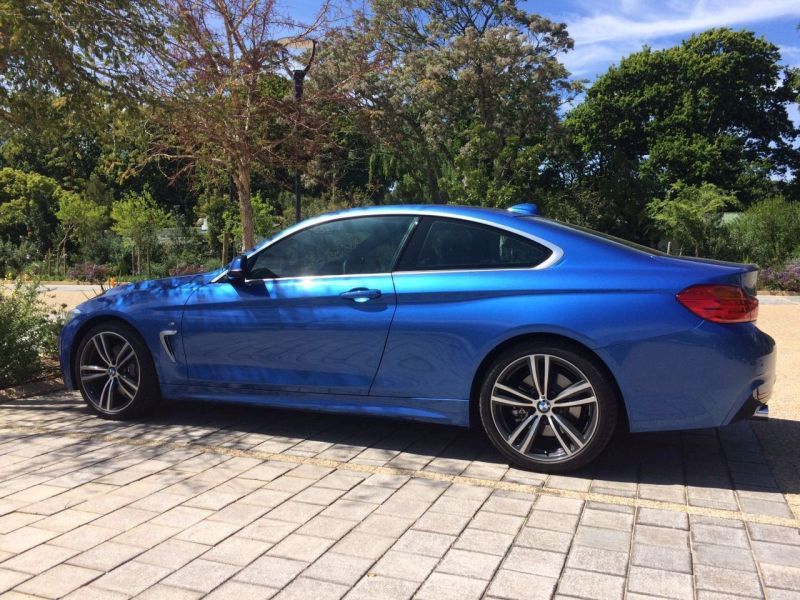 Stylish, powerful and sophisticated – the BMW 440i made us nostalgic…

Childhood memories tend to be precious and vivid, especially for burgeoning petrol heads. Between my mid to early eighties automotive recollections of colourful Mercedes’, a Series 3 Landy, Diesel Golf and a Venter trailer with brown vinyl top, there shimmers my aunt’s white 323i Coupé; complete with BMW six-pot hum.

It’s one of the few vehicles that bring seller’s remorse to my uncle’s voice. “We should have kept that little Bee Emm… not only was it great to drive but it would also be worth something today” he grumbles while carefully dropping into the passenger seat of my Estoril Blue BMW 440i Coupé press car.

Although this 440 could be seen as the 323’s spiritual successor, its encounter with my car-loving uncle is a pure but happy coincidence. We have a meeting with expert restorers for one of his latest project cars, and the 240kW BMW is perfect for our lengthy drive down sweeping B-roads to a distant town.

After an immediate agreement that the turbo-petrol six-cylinder sounds as good as it should, we also concur something else while rumbling over suburban streets – the 440i errs on the side of uncomfortable. Most likely the fault of “M-Sport” goodies fitted to this car… we both wish for a slightly more lenient ride.

Most buyers would choose the optional extra because its harder suspension and 19-inch wheels suit the powerful two-door, while all the cosmetic enhancements included in this N$32,000 option raise the coupé’s street cred. Uncle Dearest is quite happy to learn that the package is not mandatory and smaller wheels are available.

Shortly after this conclusion, we merge onto a dual-lane highway and I finally get the chance to open the taps completely. With lightning response and a bewitching combination of growls and fizzing, the 3-litre turbo-charged engine repeatedly chases 7,000rpm through its equally-eager eight-speed gearbox.

120km/h comes up in no time and we both take delight in slower traffic as it grants us more opportunities for repeating this orchestral performance.

At some point we discuss if the car is possibly overpowered but as it cruises (or commutes) as calmly and quietly as you wish, that’s simply a matter of opinion.
A few things we establish even before reaching our destination is that the monster engine’s torque is probably its most impressive feature, delivered through that superb eight-slot ‘box in perfect harmony.

Top gear around 120km/h puts no more than 2,000rpm on the dial and thanks to 450Nm of torque, there’s no real need for kick-downs.

The various drive modes can be useful but we award its default “Comfort” the best balance for everyday driving. Sport Plus is great for hard and fidgety hooliganism while Eco Pro retards the 440i’s spirit and considerable thirst. Drive it nicely and you may dive under 10L/100km. Give it horns and you certainly won’t.

There’s nothing like a few hours between rusty wrecks and charming classics to reset your perception of contemporary cars. Our hosts may not have been fans of modern vehicles but did acknowledge that this new BMW 4-Series possesses a tasteful mix of elegant lines and sporty, interesting design details.

Its interior is just as stylish with reasonably intuitive controls and some wonderful BMW hallmarks. Barring the strange gear lever and updated, sophisticated iDrive system, my uncle approved of the classic BMW instruments and driver-focused dashboard curve; which their white 323i also had. The slightly cramped rear quarters? “Typical coupé trait.”

The second half of our journey included an impromptu stop at a wine farm where the 445L boot easily swallowed almost a dozen cases of the cellar’s finest. Other noteworthy statistics include a 60L fuel tank, (limited) 250km/h top speed and 0-100km/h in five seconds. Our GPS tests confirm that.

Pricing starts at N$840,000 and seems open-ended when you delve into BMW’s options bin. I’d done a bit of research and my passenger was interested to hear about the many luxury and convenience gadgets on offer. Even more so, a choice of 16 paint hues, 17 leather and 13 trim combinations or 14 wheel designs between 17 and 19 inches.

By the time I pulled carefully into the steep driveway (4-Series’ only have 130mm ground clearance) we settled on the final statement for this review. Here goes: the BMW 440i Coupe is graceful and stylish, relatively exclusive and practical, quite fast and exciting but too hard with the M-Pack. And if you have one, don’t sell it after a few years!