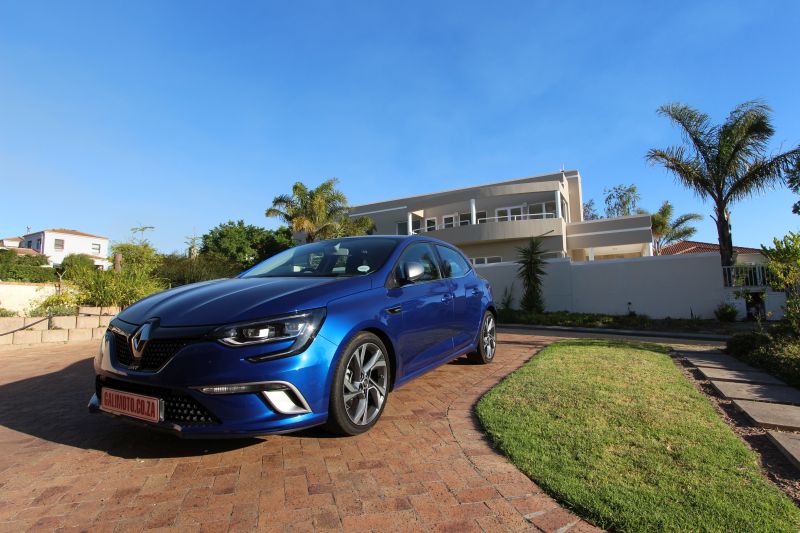 Hers and His review / comparison

Renault South Africa recently introduced their spiffy new Megane range and, not long after the local launch, brought us a deep blue metallic Megane GT Sport. With two testers doing most of the driving, we thought of drawing straws for the review but rather decided to combine our impressions in a neat his and hers review.

Her: I love the new new look. Many of you will recall that old boxy shaped Megane with the weird boot line. This one looks way more chic and, well, French… with flair and street cred. It’s a very desirable looking car and I absolutely love the LED daytime running lights like funky eyebrows and the swirling pattern design of the mags. C’est magnifique!

Him: Sjoe, this is a good-looking hatchback. The French seem to have a national design identity as this reminded me of the (also handsome and blue) Peugeot 308 we tested recently. Clean lines, good proportions, cool details and funky light clusters on either end make this car stand out.

Her: Initial thoughts as I wriggled into the snug sporty look bucket seats was that comfort was on the poor side, but a week later I got used to it… although climbing out every time still presented a problem. Word of advice to the ladies… you cannot wear a short skirt and clamber out gracefully from this hatch.

Boot space is typically generous and from my view the back seats look ok for legroom, although I admittedly didn’t give them a go. Suspension was as hard as expected but fantastic for handling!

Him: Both are on par for today’s premium hatchbacks. By that I mean four adults and a bit of luggage will be fine, Mom and Dad with three kids will be a push. The boot takes up to 434 liters and the rear seat backs fold over but don’t make a completely flat surface.

As with its contemporaries, comfort levels keep sinking due to big wheels and sporty seats. On the upside, the front bucket seats offer superb support and two-stage heating. Most furniture is covered in Alcantara with blue stitching. Blue trim items confirm that this colour is only available for GT-Line cars.

Her: Ooooh I LOVED the four control steering. Renault have done something fun with the handling of their Megane and added a 4-wheel steering function (but not a 4-wheel drive). What this effectively means is that the Megane turns on a ticky. And is loads of fun for throwing around corners. You’ll have the most enjoyment on a left turn in the city or running around a round-about…. It was like fooling around on a go-kart and definitely felt more Mini than Megane! Thumbs up for fun for this one!

After initial baffling moments in trying a few features on the Multi-sense system, I’ll admit I found it relatively intuitive… I still haven’t found the volume knob though so you’ll be stuck making use of the hidden controls behind the steering wheel for volume and skipping tracks.  Another point worth mentioning is that the Bluetooth had a delay in starting when answering calls, so expect a moment or two of confused ‘Allo, ‘allo before you can hold a conversation.

The main dial in the instrument cluster offers four distinct layouts, some of which even include power and turbo read-outs. This car’s on-board technology feels super-modern and exciting although the learning curve is quite steep. I don’t like the finish of the “ipad” surround, nor the usual Renault cruise and audio remote controls.

Her: After initial disappointment on the gearbox shifts, I got used to it – paddle shifts are great fun, the engine revs like a dream and, provided you’re not in a hurry when the car and gearbox is cold, shifts are passable. Would still prefer this in a manual though.

Him: Right now, this is the most powerful “new Megane” as the RS Cupsport 275R Trophy Bull whatever hasn’t arrived yet. The 1.6 turbo-petrol engine kicks out 151kW or 280Nm but is only available with a seven-speed double-clutch automatic gearbox. You also get eee-normous shift paddles behind the steering wheel.

Like other early DCT attempts from rival manufacturers, this one’s quite sluggish at low speeds. I have to half-floor the accelerator to reverse out of my driveway! Once on the move, shifts are reasonably smooth and pleasingly quick. At full power, it’s not quite DSG fast but still offers a high degree of control and fun.

Her: I found power delivery more than adequate and, as I mentioned above the 4-control was my favourite feature… Possibly because I spent most of my time racing up and down town to meetings and errands and back and frankly, anything that improves on that commute gets my vote!

Him: Very impressive, our best 0-100 time was 6.95 seconds and the quarter mile fell in 15 seconds. Renault claims 230km/h top speed. Hard cornering grip is on the dizzy levels of modern automobiles but the Megane’s party trick “4-Control” (four-wheel-steering) is actually most noticeable while pottering around town…

Her: I’m with him on value. Great car but I think it’s too pricey. However, if you’re looking for something with decent street cred, more space than you’d expect, fun handling and packed with features, I’d say go for it!

Him: At N$452,900 the Megane is in the ballpark for medium-spicy hatchbacks but offers all that amazing new technology. However – the previously-mentioned Peugeot 308 GT is 50 grand less with almost identical power and claimed consumption (around 6L/100km) but with a bigger boot and fuel tank. And it’s manual…