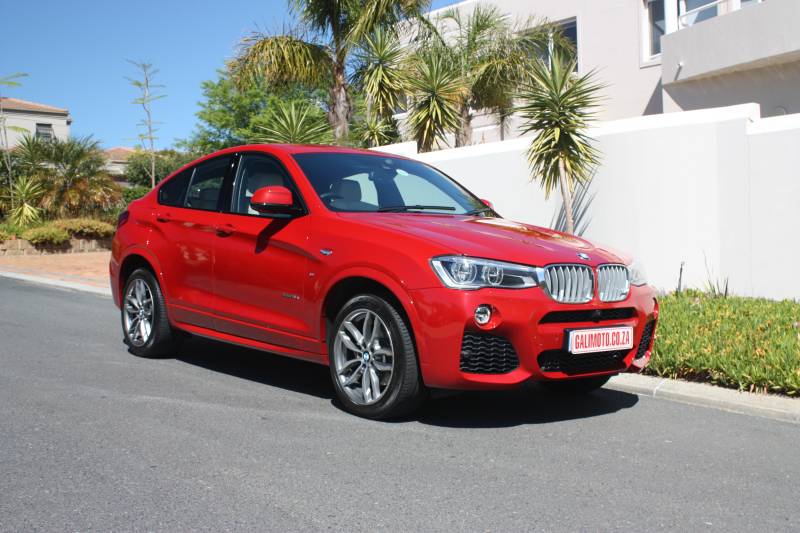 I hated this car. I hated this car even before it arrived for testing and then I wanted to hate it some more before telling you how hateful it is. Problem is, I didn’t count on BMW’s exceptional engineering and their cunning press car specifications; this X4 xDrive35i being no exception.

You see, when 90% of the cars I test are white or silver with black leather, it’s only natural that my own car is tomato red with white leather. And guess what? So was this X4. Coated in Melbourne Red and sporting Nevada Ivory leather in an otherwise tasteful black interior, I was head-over-heals in a matter of minutes.

“No,” I thought in the first few kilometres, “colours and specifications shouldn’t influence your opinion!” Trying hard to ignore the meticulous red stitching, contrasting leather inserts and embossed X logos of the N$6,200 sports seats wasn’t working too well when suddenly the engine crept under my skin.

I could fill pages about the amazingness of this award-winning motor but all you need to know is that the 225kW (306hp), 400Nm TwinPower Turbo-petrol straight six starts marching from as little as 1,250rpm and pins everyone into the bright cow hides as it yanks that beautiful BMW howl to 7,000rpm. It’s epic.

The 8-speed Sport gearbox plays along perfectly and with BMW’s multi-mode Drive Experience Controller, your X4 can be anything from a lethargic fuel saver to a rabid racer. Our performance tests repeatedly clocked 0-100km/h in about 5.5 seconds with 400m coming up in 13.8 seconds. That’s properly fast for an SUV.

Speaking of which, this is where my initial hatred of the F26 model range comes in. The X4 is another strange mixture of SUV, fast-back and sports car – leaning strongly towards the last two. Don’t we have enough with the X1, X3, X5 and X6? Apparently not. On top of that, it looks just as questionable as the X6.

I’d love to fly into a spitting rant about its lack of off-road competence (especially with the N$36,300 M-Sport package) yet the simple fact is that these cars will be bought chiefly for their status, quality and extra ride height. Our X4 easily covered bumpy dirt roads and I believe that’s the height of what new owners will subject it to.

Does that make it pointless? Not necessarily, and its odd shape will take care of the rest. Just like the X6, this car will appeal to niche clients who think it’s unique and beautiful. If BMW have the resources and infrastructure to build yet another SAV (sports activity vehicle) alongside their existing line-up, so be it.

As for the rest of my driving impressions, I’ve got mostly good news. Tall rear passengers can feel cramped with that sloping roof line and a rear windscreen wiper would’ve been helpful. Also, our fuel consumption didn’t come close to the claimed 8.3L/100km but I gladly admit that we didn’t bother or care very much.

Most drivers will gladly trade double-digit fuel figures for those amazing power outputs and the last hurdle for hard-core fans will be this car’s N$801,000 base price. That’s a hell of a lot of money and the car you’re reading about now had so many optional extras that it was N$22,500 short of a million.

I could condemn this as a ridiculous poser mobile but it’s my humble opinion that you get your money’s worth. Never mind the fantastic fire power, this red beast also had automatic everything, multiple active driver aids, clever navigation, a sunroof, surround sound and adaptive LED lights, to name a few.

The Sport suspension is a bit hard yet keen drivers may call the car’s quick damping “taut” and delight in the comfortable seats. Steering and pedal feedback is excellent, as is cornering ability in either of the two Sport modes. Rear visibility is atrocious but parking beepers are standard and surround cameras highly recommended.

I promise the red ‘n white colour combo didn’t get to me (much) and so I declare that the BMW X4 is not my kind of car – I’d look for better value elsewhere. Those of you who simply have to have one might want to consider the smaller models but if you’re really flush for cash, this xDrive35i is simply incredible.