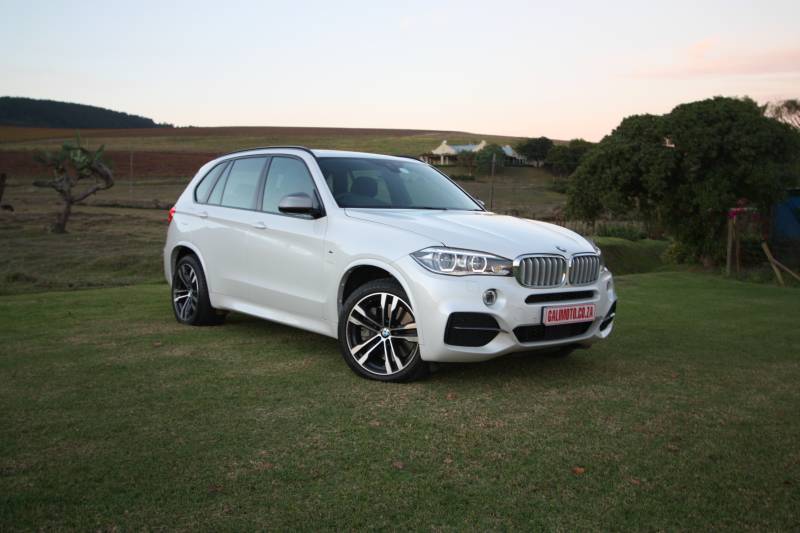 The BMW X5 was among the first of a new breed of soft, luxury SUV’s. Its first generation saw the light of day just before the turn of the millennium with the second generation following in 2006. This third iteration was launched last year and we’ve just spent a week with the range-topping M50d.

Yours truly was never a fan of soft-roaders but my respect for the X5 grows with every model I review. Kudos to BMW for sticking to their script of building a sporty, versatile, accomplished SUV, true to the in-house designation of SAV (Sports Activity Vehicle), which is spot-on.

This latest model isn’t a gigantic leap forward over the old Ex Five yet it can boast with improvements in crucial areas of its character. That means it’s more luxurious, slightly more versatile, less dirty or thirsty while upping power outputs and performance. The new body is also slightly bigger.

All models are turbo-charged for better efficiency and you may choose between two petrol and three diesel power plants, this M50d representing the most expensive and torque-rich X5 until the proper M version comes along. Wait for that if you really want and need M5 power in your SAV.

The M50d has a lot going for itself and, as I said in previous reviews of this crazy turbo-diesel, can even convert petrol-heads like myself. It may not be an actual 5-litre motor, yet a 3-litre tri-turbo straight six Diesel with 280kW (380hp) and a mind-boggling 740Nm is nothing to be snuffed at.

Delivered through a super-smooth and sporty 8-speed automatic gearbox, 0-100km/h takes just 5.3 seconds, top speed is limited to 250km/h and average fuel consumption is pinned at 6.7L/100km. Considering that this vehicle weighs two tons and rides on 19 or 20 inch wheels, those numbers are quite phenomenal.

Unfortunately our performance testing equipment was acting up so I can’t confirm the 100km/h sprint time, nor can we advocate that consumption figure. As with most cars, our weekly average was quite a bit higher with mixed driving and frequent burst of power returning between nine and 10L/100km.

Let me type that again: it’s properly impressive considering this car’s size, weight and performance. BMW have done well to disguise the new X5’s bulk with crisp design details and M-guided handling. The M50d feels solid and planted on the road, taking faster corners with almost no body roll or drama.

That monster torque figure and eight forward cogs mean that, unless you’re travelling at incredibly illegal speeds, you’ll always have abundant power reserves. Floor the monster to hear its (synthesized) six-shooter growl up to 5,000rpm or curl your big toe to dig into the torque and leave most cars for dead.

Impressed yet? You should be. Obviously this X5 comes with adaptive M suspension and wafer-thin tyres but you simply wouldn’t believe how smooth and comfy it is. That is, until you select “Sport” or “Sport Plus” from its drive mode selector. This agitates the engine, firms up the steering and solidifies the suspension.

I’m sure those settings will find their fans, especially as they can be customised, but I liked the M50d best in its default “Comfort” mode. I even tried “Eco Pro” to save some extra fuel. This setting retards throttle response while making full use of the engine’s start/stop system and some clever, encouraging graphics.

Describing every feature in the new X5’s cabin would take a month of Sundays so I’ll just focus on our best impressions. Material texture and finish is superb, our test car had real metal inlays and multi-colour mood lighting as well as a sporty, three-spoke M steering wheel.

The half-suede front pews with M-colour piping are supremely comfortable and the rear seats enjoy a completely flat floor for extra leg room or packing space. The split tailgate’s top is electrically operated, a 360° camera system helps with parking and the panoramic sunroof is absolutely massive.

The optional, N$28,100 Driving Assist Plus system features adaptive cruise control, city braking with stop & go function, pedestrian and animal recognition, lane departure and collision warning. Best of all, it offers a big button (where the lock button used to be) to select some, all or none of these assistants.

Paired with the optional, active LED headlights, our X5 would spot people or animals, show a big icon in the high-tech version of those timeless BMW instruments, beep in varying severity and throw an additional beam of light from us to the object in question; tracking it as we drove closer. Unbelievable.

Even more so is the optional B&O (Bang and Olufsen) high-end surround system, worth every cent of the required N$32,000. It amazes your ears with the efforts of an updated iDrive infotainment system with radio, Aux, mp3, DVD, hard-drive, touch pad and clever 3D navigation.

The big high-resolution monitor can even display kilowatt and torque dials, vehicle status, inclination or pitch. I did encounter one problem though – a few days into our test, the media menu got stuck in Aux front and refused to play Bluetooth sources, no matter what we tried.

I even visited my local BMW dealer and while being drowned in coffee and friendliness, a technician gave our car a good talking to, courtesy of BMW’s 5-year/100,000km motor plan. He advised that it needed a software upgrade but as this wasn’t our car, I left with the problem and a severe caffeine buzz.

That made me realise what the BMW X5 M50d is. It’s an Apple Galaxy Z7S. Not just a phone but something unbelievably intricate and amazing, packed with incredible features and supreme bragging rights. It’s very pricey just north of a million but you get what you pay for. And occasionally it needs a software upgrade.