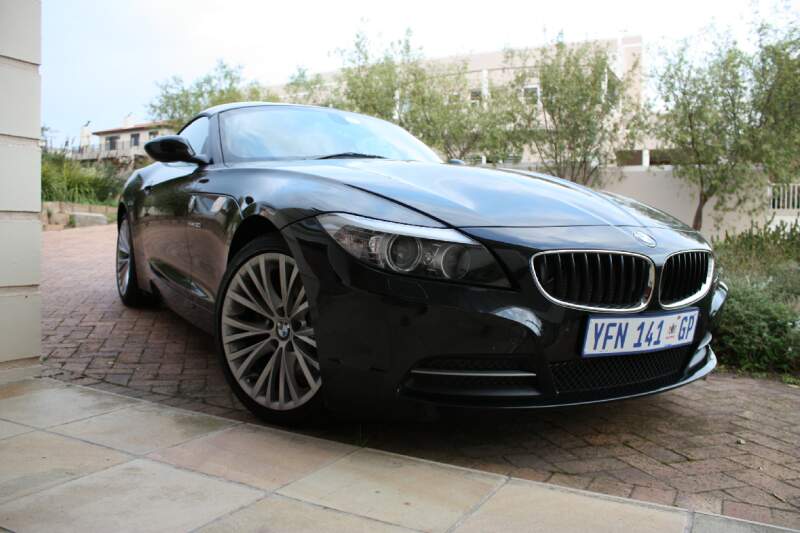 It happened again. For the second consecutive time I couldn’t test a BMW for seven days on one filling of its fuel tank. This time it wasn’t the fault of the vehicle in question (average consumption 9L/100km) but rather my insistence on driving around rather aimlessly in this poser of a car.

The Cape winter wasn’t very impressed with this idea and the last few days of my test consisted of rain, cold, rain, a freak hail shower, wind, and more rain. Then again, that gave me the perfect opportunity to test the new Z4’s biggest change: it now has a folding metal roof.

I was never convinced of the old Z4’s styling, and collegues remarked that people either adored or hated its appearance. I quickly got used to its unique lines, but was never crazy about them.

The merry men from Munich drew the Z4 in a fresh and exciting way, and there are definitely elements of a 6-series in the car’s nose. Its bonnet appears to have grown and the classic roadster look is underlined by dramatic lines along its flanks and a stubby rear end.

As already mentioned, the previous Z4 was a daring and unique design, but the new model looks far more aggressive, possibly more macho, and unbelievably sexy. Its backside shows bigger and more delicate lights with LED technology, and in proper BMW tradition there are two big chrome exhaust tips lurking out of the bumper.

Things have also changed dramatically on the inside with new equipment and a fresh look. Because a Z4 sits so close to the tarmac it isn’t always easy to get into the car. Its two seats hover mere centimetres above the road, and often you FALL into the car while you reluctantly attempt to get in.

Both seats are made for sporty owners and show hard padding with plenty of support for any swift changes in direction. They are electrically adjustable, and the steering wheel of a Z4 can also be adjusted for reach and length.

It remains a hallmark of BMW’s before you even switch on the engine, that sporty position everyone assumes behind the wheel. Here you will also glance upon uncomplicated instruments which have replaced a water temperature dial for an oil equivalent.

This counterpart gives you a much better idea when the time is right to let the Z4 sDrive30i’s three-litre straight-six sing. But it takes a while before the excellent engine warms up, and it starts with a button aptly named “Engine Start”.

A Z4 wakes up with the sound of six well-balanced cylinders, and a big information screen folding out of the top of its dashboard. Radio, CD, USB, navigation, parking assistance, telephone (Bluetooth) and a few other options are all displayed here, and the flow of information is controlled by the central iDrive knob.

The thick BMW steering wheel also has buttons for most of these functions, and in the new Z4 it also boasts gear shift pedals on both sides. The two silver pedals serve the same purpose; meaning you can shift gears in any direction with either your left or right hand. Press any pedal forward for a lower gear, or pull it towards you for a higher one.

Z4’s 6-speed automatic gearbox will quickly adapt to your wishes, but start doing its own thing again a few seconds later. Press the “Sport” button next to the gearlever and you can choose from three modes: Normal, Sport or Sport Plus.

The first option is for everyday (fully automatic) use, the second leaves gear changes up to you via the steering wheel pedals, and the last one does the same but switches off the traction control. With the sDrive30i’s price tag a whisper above N$600 000 I chose to ignore this setting, but often darted through town in “Sport” mode.

Especially if the roof is elegantly stored in the boot, the Z4 transforms into a wonderful small sportscar. Six trumpets live in its exhaust pipes and, depending on the engine revs, either drone or scream. The car’s performance is highly pleasurable with 190kW (256hp) and 310Nm which can propel you to 100km/h in 6 seconds.

The relatively hard suspension changes to a very precise way to get from corner to corner with confidence; the new Z4 shall surely let the heart of any sporty driver smile.

Because you sit so low and far back (just behind the rear axle), and just glimpse over the massive bonnet, the BMW Z4 gives you a new sensation of driving. A very pleasurable one.

BMW’s Z4 now has the roof it always deserved, I think it looks incredibly beautiful, and its road-holding is still on BMW’s sporty standards. Those of you who can afford it will not be disappointed, and also enjoy a 5 year 100 000km motorplan.