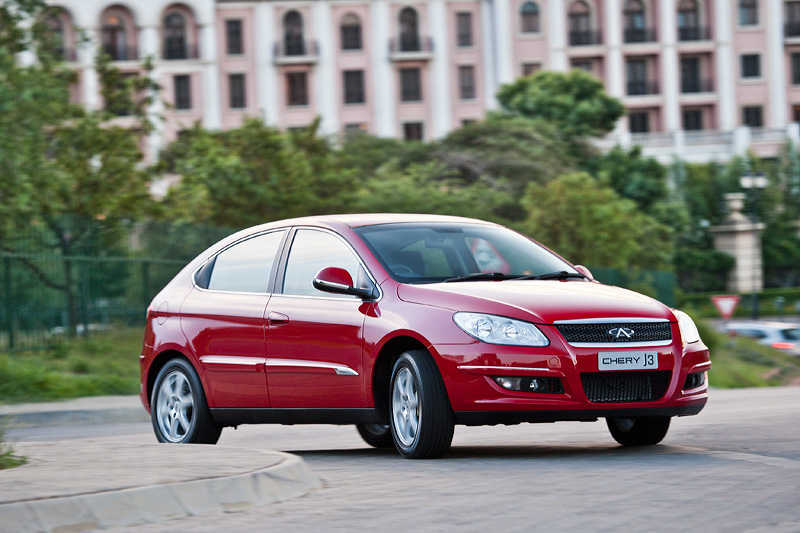 It never rains but pours. No sooner had I reviewed a Chinese car and another one pitched up for a spot of evaluation. This week was the turn of Chery’s J3 TXE, a medium-sized hatchback from that land with the world’s biggest and oldest security estate wall.

The Chery Automobile Company Ltd. was founded in 1997 and primarily produces passenger and light commercial vehicles, recently rising into the country’s top ten car makers list. They are China’s chief vehicle exporter and even went into cahoots with Jaguar and Land-Rover to produce the British cars in China.

As part of a worldwide onslaught to over 70 countries, southern Africa welcomed Chery in 2008 under the umbrellas of the McCarthy and Imperial groups. Chery has 13 factories worldwide and currently offers the QQ3 supermini, J1 compact hatch, J3 medium hatch and Tiggo small SUV for sale locally.

The J3 is only available in this 1.6 TXE model with decent specifications and no options, as far as I can tell. Ours was coated in bright red paint (four others available) with fetching 16-inch alloys and some shiny trim to set off its round, inoffensive shape. It certainly doesn’t look like a copy of anything.

A few distinguishing features we noted during our test were the strangely protruding and oval third brake light, LED reverse light and parking sensors. Not too bad hey Nige? Before I reveal its price, let me also point out the leather seats, multi-function steering wheel, automatic lights and automatic wipers.

Cabin materials and fit aren’t top drawer but then neither is the price – N$179,900. Crucially, during our week’s testing, nothing fell off or malfunctioned as the sceptics would have you believe. The slight solvent smell when parked in direct sunlight was easily countered by a ferocious ventilation system.

All seats were judged as being on the hard side but offered good support on long journeys with ample head- and leg-room for four adults. The instrumentation and radio are rather simple and the J3 has very clever and impressive storage trays hidden all over its dashboard.

We would’ve liked a rear windscreen wiper and some form of spoiler to kerb the rear’s overwhelming roundness but believe that a hotter, spoiler’d version of the J3 may be on its way to us soon. Which brings me to the car’s engine – a 1,597cc 16-valve inline four-cylinder petrol with 87kW (118hp) and 147Nm.

That really doesn’t sound like much but it works through a friendly clutch and chunky five-speed gearbox against the J3’s dry weight of just 1,350kg. That means performance is acceptable and you can expect average consumption of 7.7L/100km from the 57L tank.

Every driver found the 1,600 motor to be eager and fruity, hissing through the exhaust as it went about its work. Another thing every occupant commented on was the unbelievably good ride quality. Cornering and handling are ok’ish but the J3 has impeccable damping manners – it is supremely comfortable!

Front McPherson struts team up with multi-link rear linkages and a stabiliser bar to produce a surprise ace up the Chinese sleeve. If you’re after a comfy hatchback, take a J3 for a spin. Your purchase will also activate a 3-year/100,000km warranty, roadside assistance and a 3-year/75,000km service plan.