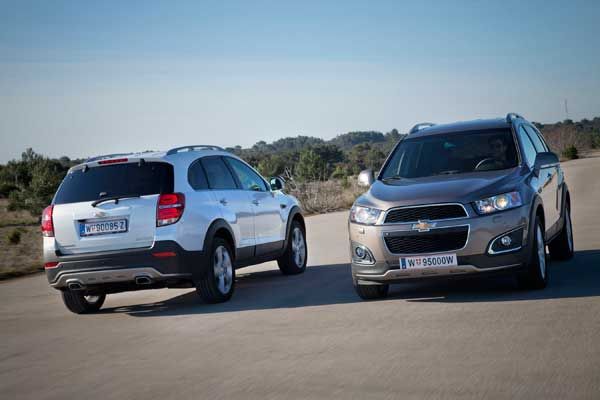 Is there still such a thing as a bad car? I’ve been asked the question before and the best answer would be “not really”. Some Asian cars aren’t that nice but neither are their prices so it’s all relative at the end of the review. Some cars are just “ok” though, and Chevrolet’s Captiva is one of them.

Before everyone at GM starts typing heated emails and putting red lines through my name, allow me to explain. The Captiva is far from rubbish and although it has some creaking plastics, it’s nowhere near as nasty or smelly as the stack ’em high and sell ‘em low brigade.

That typed, there’s nothing special or amazing about it like, say, a Mercedes S-Class. I can personally vouch for that because there’s a fresh one parked outside my home and everyone I know is coming up with the craziest excuses (and a few valid ones) to drive to Luanda. Did that happen with the Captiva? No.

Yes, yes, it’s all relative and the fat Benz is exactly 3.8 times more expensive than the base Captiva so the Chevy has sufficient license to be 3.8 times as unexciting. Hold your red pens, this won’t be a shoot-out between the two and I’ve made some notes about the Captiva’s more endearing features…

Coated in Placid Grey (no jokes!), our Captiva test unit was the first of three available models: 2.4 petrol LT FWD Manual, 2.4 petrol LT FWD Automatic and 2.2 turbo-diesel LTZ AWD. Priced from N$330,300 with decent specifications, seven seats and five-star safety, this LT version has a lot going for itself.

Those two extra seats in the boot floor are quite a temptation in this price bracket and while they’re just suited to children, you’re left with sufficient space behind them (+/- 100L) for half a dozen school satchels. Six airbags and various safety aids make sure that the Captiva protects your passengers when it matters.

What also immediately struck us was the amount of space. Although it has multi-cultural roots, this Chevy wouldn’t be snuffed at in the space-crazed American market. Head- and leg-room are excellent in the front two rows plus you get loads of storage nooks for keys, cups and other automotive clutter.

Leather is optional (standard in the turbo-diesel AWD) and will doubtless be volcano black – I liked the black cloth with funky grey patterns in this model. You may also choose a “luxury package” which gives you a sunroof, climate control, trip computer and a compass; all standard in the dearest Captiva.

Other fancy stuff reserved for the top dog are auto-dimming rear-view mirrors, auto lights, power driver’s seat, a bit of extra interior lighting and 19-inch alloys as opposed to the standard 17-inch units. You still get power windows and mirrors, cruise control, rear park assist and such like in the cheaper pair.

Convenient stuff you should know about is the rear seats’ ability to recline as well as a split tailgate where the windscreen opens separately. The steering wheel adjusts in many ways, there are seven seatbelts with pre-tensioners as well as ISOFIX anchors, remote central locking and auto door locks.

The Captiva’s radio with CD, and mp3/aux/USB and Bluetooth support took a while to figure out but the sound from its eight speakers is most impressive. ABS brakes are supplemented by emergency assist and force distribution, stability control, traction control and hill descent control.

Now for some numbers. The 2,384cc in-line four-cylinder petrol engine churns out up to 123kW (167hp) at 5,600rpm or 230Nm at 4,600rpm. This is noticeable in its response which is adequate at low rpm’s and in-gear acceleration, becoming quite impressive at the engine’s maximum speed range.

The 4.7m long Captiva offers 171mm of ground clearance (unladen) for mild excursions off the beaten tar and didn’t put up a fuss with the few dirt roads we traversed. It also didn’t mind a bit of luggage or a few passengers as you can load 1,500kg and tow the same amount.

I should probably tell you how it drives but I can’t really recall anything. Not bad, I guess. Perhaps “forgettable” is too strong a word because the Captiva does everything you want and offers great features and a competitive price. “It’s ok” like I said earlier.

If you’re in the market for something cool and exciting, you may want to keep moving. Sign on the dotted line if you’re looking for a big car, not special or exhilarating, just one which offers good value. Chevrolet will also throw in a 5-year/100,000km warranty and 3-year/60,000km service plan.