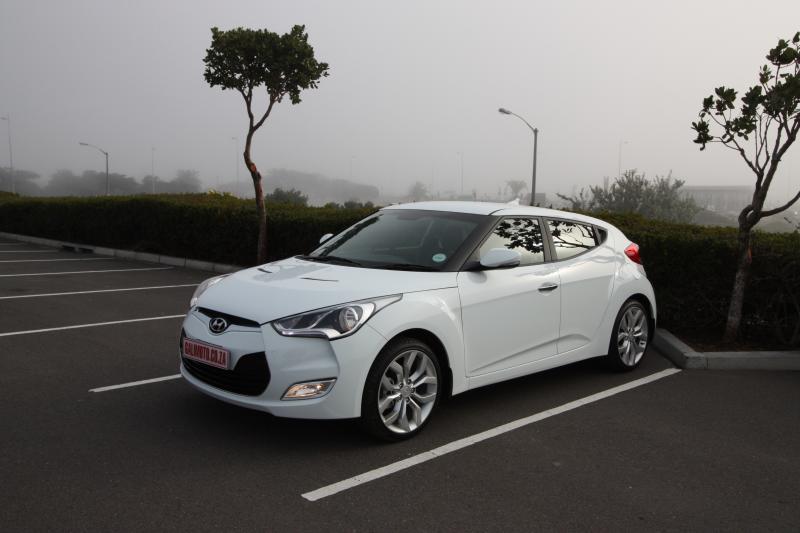 “Who is this car aimed at?” was probably the most pertinent question I heard while testing the strange new Hyundai Veloster. Most observers inspected every inch of the 2+1 door coupe/hatchback yet only one bystander enquired about the purpose of its unusual layout.

I answered with a collection of umm’s and ahh’s, eventually settling on young trendsetters with very infrequent needs for rear passengers. To a single person only ever getting in on the driver’s side, this car may very well be a coupé; onlookers will think the same as long as you always cruise past the café from left to right.

Hyundai can pat themselves on the back repeatedly for the Veloster’s styling, although some comments were sweet-sour and a few competitor names came up (Megane, Scirocco) our test car drew at least as much interest as the Mercedes A-Class we tested a week earlier.

Its interior styling is also worth a mention with a swooping dash, enough silver highlights, protruding Veloster badges and blue lighting to satisfy most trendsetters. A big infotainment touch-screen reproduces sounds from radio, CD, ipod, Aux/mp3 and Bluetooth through a thumping great 7.1 sound system.

The display was far too bright at night and doesn’t dim in conjunction with the main instruments. Even its fully-dimmed night-mode blinded me to the point that I drove around with one hand covering the display until I found a darker theme for the menus.

While I’m tearing into the Veloster I may as well continue by explaining why I had one unoccupied arm. The car we tested was the more expensive Veloster with a double-clutch six-speed automatic gearbox. It’s my humble opinion that Hyundai is either lying or completely rubbish at making a DCT ‘box.

I would’ve loved to physically take the gearbox apart and check it out but I learnt many years ago that I’m an expert at dismantling stuff and hopeless at reversing the process. The reason I wanted to peek inside was that it behaves nothing like a double-clutch auto, save for jerky low-speed response.

Shifts are smooth but that’s about it. The transitions take ages, it doesn’t blip the throttle or pop the exhaust, has no shift paddles and can’t change more than one ratio at a time without considerable hesitation.

This, you’ll surely agree, is the whole point of a double-clutch unit.

Had they said it was a regular auto, I would have proclaimed it as smooth, slow and occasionally confused. As a double-clutch gearbox, it’s rather hopeless and my sentiments were mirrored by other drivers who got out of the automatic Veloster annoyed and disappointed.

If you do a lot of lazy mileage, it might be fine. Might. Should you get a manual Veloster in one of its vibrant colours, you’ll have a great-looking and unique car which turns plenty of heads and is reasonably fun to drive.

Performance from the 103kW/167Nm 1.6L engine is acceptable, 0-100 takes 10 seconds and top speed is 200km/h while claimed average fuel consumption is 8.4L/100km. Speed freaks should wait a few months for the turbo version and everyone else would do well to avoid the so-called double-clutch gearbox.