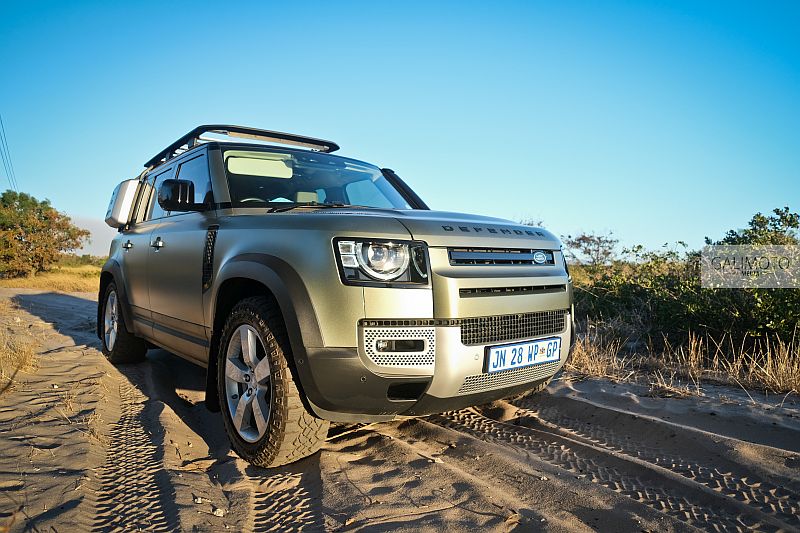 Without a doubt the most important model for the British manufacturer, Land Rover; the Defender name has been one to be reckoned with for over 70 years. We recently tested the new P400 S model to see if this name will still be as formidable in the future.

At 5018mm long and 2088mm wide, the new Defender quickly established its authority in my residential complex. If you, like I did, believe that the new Defender is just a Discovery with bigger off-road tyres, it is best you pop around to the dealership to see one in living flesh. This is not a small car and weighing in at 2.2 ton, can be compared to the big child, forcing their way through the tuck shop line.

Sure, the Defender can be mean and scary, but it can also be soft and well-behaved on the open road.

Much of the same can be said for the interior as simplicity seems to be the order of the day. Yet, with minor designs here and there the new Defender keeps its rugged approach as in the generations before. Simultaneously, this Defender also has most of the new technology in the Jaguar Land Rover stable, but is well hidden away. Land Rover did a good job to make the new Defender as technologically advanced as possible, however, without taking away the spirited nostalgic feeling of it being a serious off-roader.

A 10-inch infotainment display, as well as multiple USB (both front- and rear) and 12 Volt ports, partnered with connectivity such as Bluetooth, Apple CarPlay and Android Auto result in an easy-to-use interior space.

Did we mention that the Defender also has three rows of seats and can provide from 743 litres (third row folded down) to 1826 litres of luggage space?

Seating is comfortable all-round so all passengers (even fully grown giants) have enough leg- and headroom.

If we were to talk about all the personalised features and packages, this article might have been a daunting task to read. We therefore rely on you as the reader to see exactly how the Defender can be sculpted for your particular use.

What we can say is that the new Defender is the perfect vehicle and the perfect balance between a daily commuter, spacious road tripper, as well as a no-nonsense off-roader.

Inside the Defender is spacious enough for a fully grown family of five or even seven, while enough digital functions are bound to keep everyone quiet and happy for quite some time. With that, the straight six, 3.0 turbo-petrol engine can hold its own in any situation and provide an average fuel consumption of 11 litres / 100km.

This is quite an astonishing figure, considering that we also played in the soft sand with this heavy vehicle on several occasions.

This is greatly thanks to the new MHEV (partly hybrid) system together with an 8-speed automatic gearbox. This means that the 294kW and 550Nm engine runs at 1500 rpm on the open road (at 120km/h), whilst also being more than capable of overtaking anyone. Simultaneously, the P400 S is also capable of pulling 3.5 ton.

During the launch trip as well as our week-long test, the Defender kept on surprising us with its off-road capabilities. This is largely thanks to its electronically adaptable independent suspension, moving away from the rugged and stiff ladder frame.

Soft sand and deep waterways are no match as a maximum ground clearance of 218mm result in the Defender being able to approach obstacles at 30 degrees, depart at 37.7 degrees, as well as dive into depths of 900mm.