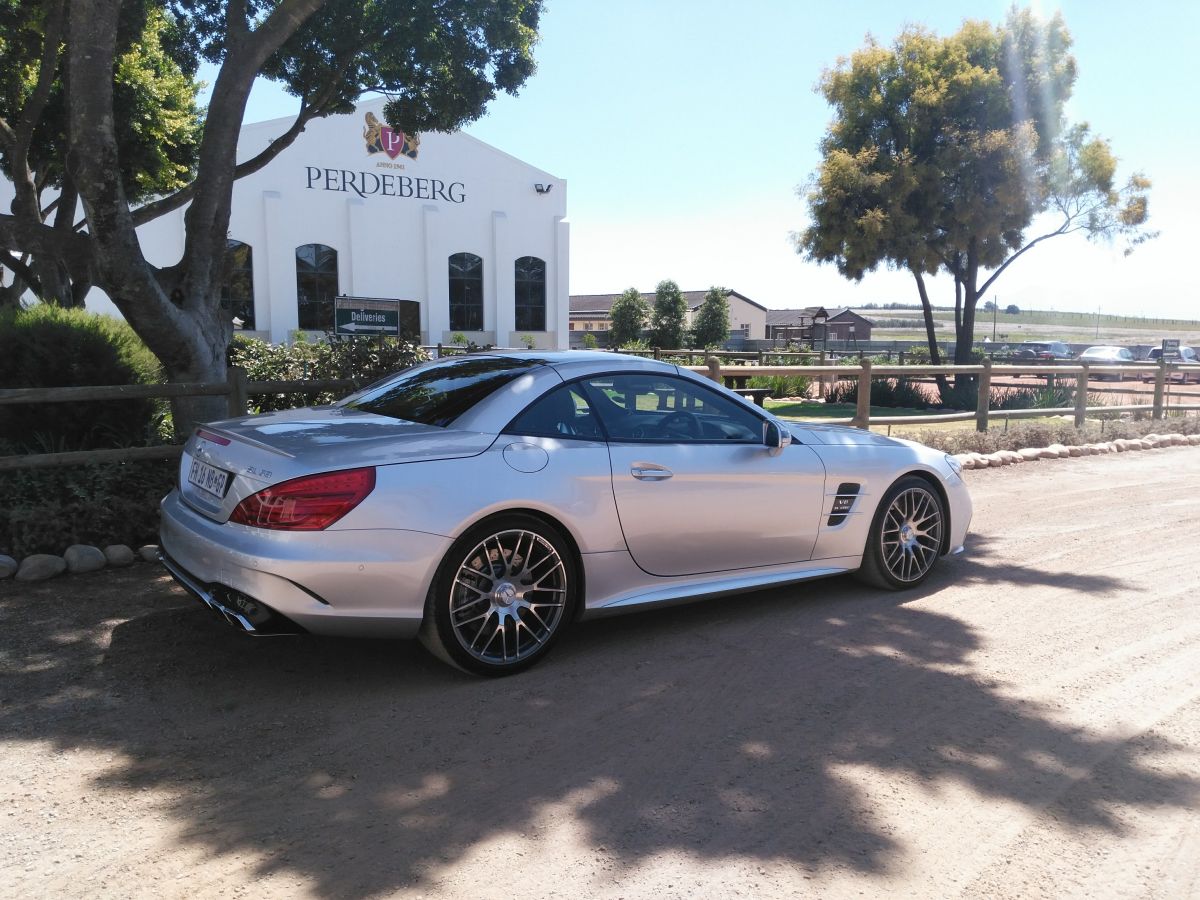 The name Mercedes-Benz has always stood for luxurious automobiles and within their own pecking order, the letters “SL” tend to crown most price lists. Although slightly removed from the original abbreviation (Sporty and Light), there are few cars on the market with an illustrious heritage like the Mercedes SL.

For those wanting even more – especially in terms of power and speed – the in-house tuning division AMG is here to help. The SL 400 Biturbo V6 or SL 500 Biturbo V8 are already sold with AMG looks as standard but if their power outputs were somehow not enough, there are two full-on Mercedes-AMG models on offer.

Topping the charts is the monstrous SL 65 with over 600 horsepower from its Biturbo V12 engine; and a price tag which almost encompasses an SL 400 AND SL 500. The silver SL 63 I just had on test for a week seems more civilised by comparison and costs a “mere” two point five million Rand (February 2017).

Let me assure you that it is far from civilised though; that became abundantly clear within the first few miles with this 5.5-litre Bi-Turbo V8. 430kW or 585hp are hard to disguise or keep quiet, even if Mercedes and AMG have done a sterling job of keeping the car’s looks relatively discreet yet purposeful within their brand design.

This SL 63’s basis, the freshly-updated R231 model, is a pure two-seater (with small storage binnacles behind the seats) and the magic of a retractable roof in metal and glass; or optional dimmable glass. Heated seats provide relief for topless winter excursions while additional extras turn them into fully-climatised furniture.

Compared to newer Mercedes products, the SL dashboard has a built-in and comparatively small infotainment screen as opposed to the bigger, free-standing devices in A- or C-Class. The gigantic twin monitors (with digital instruments) of E- and S-Class will surely make their way to the SL with the new model in a few years.

Other than that, I had no critiques inside the stylish roadster. Its AMG seats are superbly comfortable and supportive with (optional) active side bolsters. Subtle AMG badges around the cabin and instruments join up with the embossed AMG logo on the stubby gear selector to remind you that this is something rather special.

If you needed a final reminder, just hit the engine start button. The 63’s 5,461cc V8 wakes up with a short bark and settles into a dog-frightening low rumble. Except when it’s cold, then it’ll keep roaring away merrily for half a minute or until most of your neighbours have realised you’re taking the AMG to work.

Power goes to the rear wheels via a 7-speed MCT (dual clutch) AMG automatic gearbox which begs caution at parking speeds because it feels unresponsive and jerky. Like any other DCT, really. Once on the move, it is a marvel of modern transmissions and perfectly ties into the car’s multiple drive modes.

The default “Comfort” setting underlines the SL’s touring abilities, while “Sport” and “Sport+” progressively agitate the car’s engine, gearbox and air suspension. There’s also a hard-core “Race” mode and an “Individual” setting for choosing your favourite combination of the aforementioned options.

You may paw your own way through the cogs with shift paddles and a Manual mode but – especially at full throttle – the gearbox does a good job itself. Except perhaps in “Race Start” mode (a type of launch control) which generated too much wheel spin and hence, slower acceleration times during our performance tests.

Mercedes claims 0-100km/h in 4.1 seconds and our best was a decent 4.05 (without Race Start) while 400m came up in 11.79 seconds at 204.43km/h. In plain English that means it’s one of the fastest topless cars money can buy. So fast, in fact, that first gear is restricted and never delivers full power.

If you’re lucky, second gear unleashes full potential briefly (amidst a squirming rear end) before third gear engages and you REALLY start accelerating. The SL 63 AMG is brutally fast. Although it’s also blessed with a stupendously broad power band and hardly has turbo lag, its mid-range punch is of the unbelievable kind.

Floor it between 3,000 and 4,500rpm to experience neck-snapping response and almighty acceleration. On full kickdown, 120 to 160km/h takes 2.8 seconds. All the while you’ll be subjected to the V8’s thunderous soundtrack which goes from a grumbling murmur at low speeds to loud machine-gun fire at full tilt.

The beauty of this car is that you can switch to Comfort mode and cruise in peace and quiet. I would highly recommend the optional B&W sound system for this. The Vario Roof only operates at walking pace but it’s now got a fully automated boot protector. Roof up you get 381L of space; with the origami roof stowed about 240.

Fuel consumption is disastrous in town or when you’re gunning it (I saw 29L/100km once) but it’s easy to achieve 12L/100km on a steady open-road cruise. The brakes are excellent, its LED headlights even more so, rear visibility is superb with the roof down and it even has a feature to lift its nose over speed bumps.

Does that justify its 2.5m bucks asking price? I certainly think so, never mind the mind-blowing power but just for the accomplished and exotic SL platform. You don’t see one every day. For those on a tighter budget, or who just want to cruise in style, the lesser 400 or 500 models should also do the job perfectly.