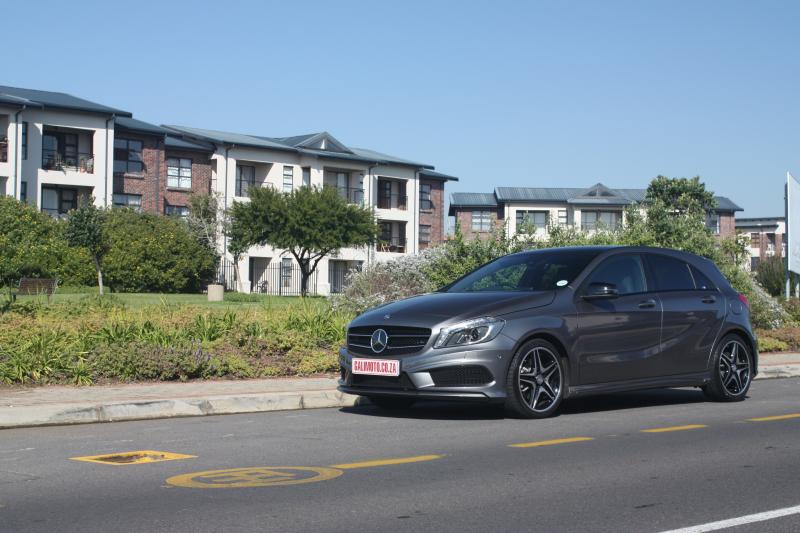 Very few vehicles generate so much excitement BEFORE they’re launched. Mercedes-Benz’s new A-Class seems to have been leaked out to all and sundry before many of us even received our invitation to the launch, but that doesn’t make it any less innovative and fresh once you get to see and drive it for yourself.

With a radical departure from the original A-Class MPV style, Mercedes-Benz seems to have offered a very sporty hatchback that mimics aspects from several popular sporty hatches. Comments on the A-Class’s appearance referred to both the BMW 1-series as well as Audi’s A3 in terms of appearance.

Despite the comparisons, there’s no denying that the new A-Class is extremely well received in the looks department. The much reduced height and increased width coupled with bold lines and aggressive sporty styling makes the new A-Class appear much more grown up and athletic than its predecessor.

…oodles of low down torque and plenty of pizazz.

Our A220 CDI BlueEfficiency test car utilises the impressive diesel technology which Mercedes-Benz has developed. The small motor packs a big punch despite its 125kW output with oodles of low down torque and plenty of pizazz. The addition of an AMG sport pack added to the looks and performance but resulted in an incredibly hard, uncomfortable and fidgety ride at slow speeds.

This option, while adding a lot to the A220’s looks is almost too much for what is already plenty of performance. Handling wise, the A220 is a gem – at speed, the car sits and holds its line through twists and turns and is a thrilling drive.

…holds its line through twists and turns and is a thrilling drive.

Our model sported electrically adjustable seats, a multi-function steering wheel as well as heated and vented seats (optional). The new A-Class is exceptionally spacious both in front and at the rear and the extremely comfortable seats with peer-through headrests also deserve a thumbs-up. The standard of luxurious finishes that you expect from Mercedes-Benz was consistently high throughout.

The standard of luxurious finishes that you expect from Mercedes-Benz…

As a new look A-Class, I love what Mercedes-Benz has brought to the table. Driving the A220 CDI was a pleasure and the reactions and comments from colleagues were favourable. The two major drawbacks on our model were the AMG Sport pack which detracted from a wholly enjoyable driving experience at all times and the price – including options, our model was a little shy of N$400 000 and this is a bit steep in terms of value for money. But if it’s looks, performance and wow factor that you’re looking for and you’re in the market for a sporty hatch, I would definitely give the new A-Class some consideration.

The Mercedes-Benz A-Class is available from a price of N$275 257 (incl CO2 tax and VAT). The A220 CDI BlueEfficiency starts at N$355 000 incl VAT. All A-Classes come with standard Premium Drive maintenance plan which covers servicing and parts for 100 000km / 6 years.