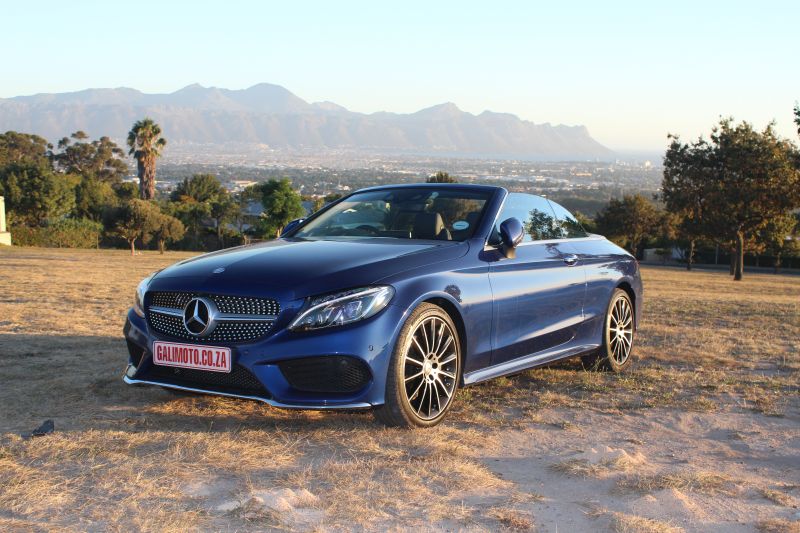 For today’s review I could tell you all sorts of things which nobody cares about. Horsepower, airbag count, none of these matters. Perhaps they would for another vehicle but not the new Mercedes-Benz C-Class Cabriolet. All you need to hear – because you already know it – is how achingly pretty it is.

Yours truly is not the biggest fan of Merc’s new design language: blunt and aggressive faces with high-brow rear ends. Coated in deep metallic blue with multi-spoke AMG alloys and just enough bling, this C220d press car quickly changed my opinion. What a stunner.

That’s if you drop the sturdy fabric roof, which folds away in mere seconds. It can even be operated while driving at slow speeds and there’s a button that controls all four side windows. Perfect cabrio credentials. Another knoppie raises a rear wind deflector and an air flap in the windscreen frame for even more topless comfort.

Convertible haters tell of leaky roofs, floppy handling and tiny boots; the new C-Class Cab begs to differ. This car’s fat tyres were louder than any wind noise at speed, the ride felt almost as tight as a sedan and its boot offered sufficient cargo space; the rear seats even more.

So were there any negatives? Well, I dreaded the first press of that silver start button because of the agricultural propulsion but this turbo-diesel didn’t sound as coarse as expected. It still seemed odd in a sleek drop-top but I’d equate it to Cindy Crawford’s mole or David Beckham’s voice. You still would.

The ride wasn’t always smooth over rough ground, which is completely normal for today’s cars with their low-profile tyres. This C220d also had a drive mode selector with TWO Sport modes, both of which made it sound and handle worse. I ignored them and simply enjoyed the car’s leisurely cruising abilities.

Its nine automatic gears slot in perfectly to any speed you choose although there isn’t much outright power – 125kW or 400Nm, for those who care. A cruising C220d is always doing 1,400rpm (yes, even at 120km/h) and the motor happily picks up the pace from those revs. It’s a modern torque monster.

MB claims 0-100 in 8.2 seconds and a top speed of 200-something, which doesn’t matter. More important is the fact that the C220d claims 5L/100km and we easily got six or seven. Thanks to its 66L tank, we were comfortably headed for 1,000km range during our week of testing.

The price of around N$800,000 (depending on spec) includes a six-year unlimited mileage warranty and six-year 100,000km service plan but you probably don’t care about that either. You just want it for the looks but happily, the C220d Cabriolet can do a lot more than look pretty.