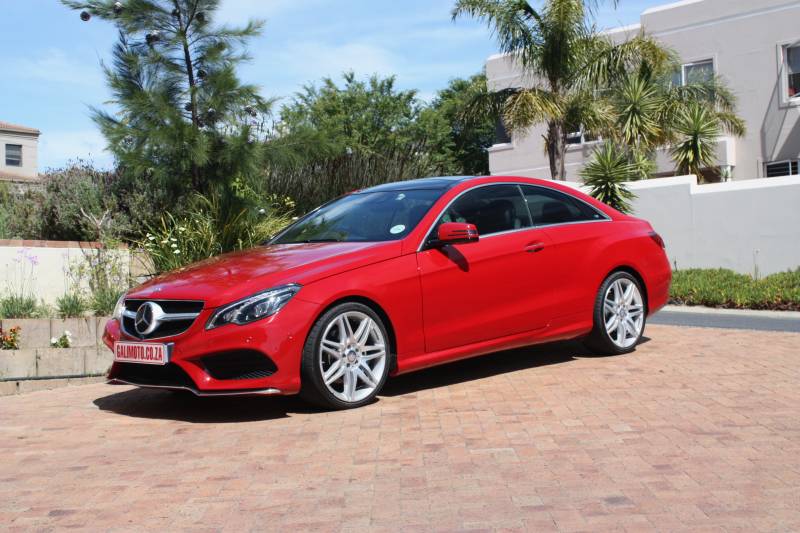 You’re in luck. As a connoisseur of grand tourers and a previous owner of this car’s predecessor, you find me properly qualified to review the Mercedes-Benz E-Class Coupé. The one which arrived for testing was a Fire Opal Red E250 CDI with lots of AMG trinkets and other optional extras.

Straight off the bat, this car’s relative exclusivity appealed to me. There’s only one of these cruising in my neighbourhood and the poor E-Class range isn’t exactly a hot seller, instead fighting for sales with its own siblings. The C-Class is little Miss Popular, S-Class has the brains and CLS the looks. Ag shame tog.

Still, anyone looking for a medium-sized Mercedes coupé will probably end up with one of these instead of the old C-Class or hideously expensive S-Class. It held out as long as possible but eventually the sedate E-Class also fell victim to Merc’s flashy design language. Bye-bye granddad taxi, hello Miami cocktail bar.

Although its overall shape is still elegant, new light clusters and a completely different face add glitz and glamour to these cars. On the upside, the detailing is modern and tasteful while the interior hasn’t suffered much at all. In all probability, its looming update will add style and reduce buttons.

Two annoyances jump out of my notes and the first one occurs when pressing the keyless starter button (N$10,800) outside your preferred curb-side café. Emanating from the gleaming red coupé with its frameless doors and ribbons of crisp LED lights is the sound of a farm tractor. Cluck cluck cluck cluck cluck cluck…

Yup, I disapprove of Diesel coupés. In its defence though, the 2,2-litre four-cylinder turbo-diesel in this E250 CDI is only noisy at idle and actually produces remarkable power for an entry-level model. 150kW (204hp) is on tap at 4,200rpm but more importantly, 500Nm thrust it forward from just 1,600rpm.

Delivered to the rear wheels via ye olde seven-speed automatic, an E250 driver can ride an almost seamless wave of torque, floor it to reach 100km/h in 8.1 seconds or slow down and go for the claimed 5.3L/100km. Good luck with that, by the way. We tried our best and got to about seven.

Next in line for a hiding are the big and beautiful AMG wheels fitted to our test car. At 19 inches diameter with 35 and 30 profile tyres, this is probably the closest I’ve ever come to experiencing what it might feel like driving with four flat tyres. To make things worse, the car then tries to compensate for this peril.

Fitted with Airmatic intelligent suspension, our E250 would detect the front crashing over a bump, ridge or pebble; then completely loosen the rear shocks to create a reverse bakkie effect: granite-hard front, marshmallow rear. I’ve never clenched my teeth and buttocks as much as in this car.

Setting the dampers to Sport mode makes everything worse so all of our testers can only chant in unison that you should avoid big wheels on this car. Stay with 17 or 18 inch. Our test car had many other optional goodies including AMG Pack (N$31,000), 360° camera (N$13,400) and Comand navigation (N$23,500).

We highly recommend climate front seats (N$13,100) and the Harman Kardon Logic 7 surround system (N$13,500) but you’ll find plenty of other options to individualise this beautiful two-door. Standard specifications include a host of safety and convenience items for the base price of N$638,500.

Ignoring its stone suspension for now, the E-Class Coupé was a pleasure to pilot for a week. Steering and pedal feedback is as smooth and relaxed as the atmosphere in its luxurious cabin. The rear seats can accommodate two adults with ease and we took great delight in the missing B pillar and seatbelt butlers.

Being a Mercedes-Benz, our E250 CDI simply gobbled up the miles and impressed various drivers with its excellent headlights, brakes and seats. This vibrant coat of paint wasn’t everyone’s cup of tea but it is a no-cost option and, together with its big chrome splitter, made me turn around at least once after parking the car.

In summary, the E-Class Coupé is worthy of the three-pointed star although its extravagant new looks might scare conservative clientele. The little Diesel engine impresses with its power delivery and if a salesperson suggests big AMG wheels, hit them over the head with a G-Class brochure.