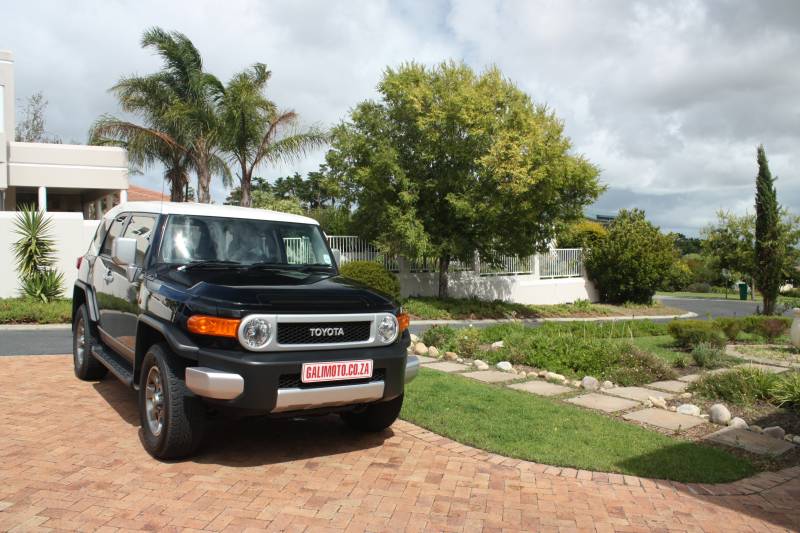 Some of my earliest childhood memories take place on gran’s farm near Dordabis. The smell of furniture polish in the gigantic house, a thriving herb garden out front, the monotonous beat of a Lister engine and a powder blue Toyota Land-Cruiser FJ40 pick-up parked next to the second barn.

The farm has long been sold and I often think that FJ40 sealed the deal. Never shy to work, it always started first time and its blue paint was marked with countless scratches and dents from the many tasks it performed as the daily runner, hunting vehicle and carry-all of this land.

Fast forward a few decades and Toyota pays homage to these durable workhorses with this retro take called FJ Cruiser. Based heavily on a Land-Cruiser Prado, the oddball 4×4 combines elements of its ancestor with strange proportions, bizarre doors and a near-vertical windscreen with three wipers.

Big headlights and ye olde Toyota letters frame the retro grill while mock silver bumpers protrude from the front corners just as much as the strange lights do at the back. The square wheel arches house big wheels with gunmetal alloys and the spare wheel sits on a rear door which hinges in the wrong direction.

Due to its extreme squareness and slim window line, the cabin welcomes occupants with an extremely high waistline, tall dashboard and low seating position. That slab of a front windscreen seems a mile away and for this reason, Toyota has installed a second set of side sun visors above both front doors.

Its radio with CD/mp3, USB, Aux and Bluetooth capability also looks like a relic but it pumps impressive tunes through six thumping speakers with satellite buttons on the height-adjustable steering wheel. The big instruments seem a tad playful and supply battery voltage above the usual information.

Rear accommodation can be tight for adults and the door/window construction doesn’t help to ease any claustrophobia. Most of the floor is covered in tough rubber mats and this also applies to the 990L boot area. Rear visibility is rather tragic so the reversing camera is a welcome standard feature.

The FJ Cruiser has been discontinued elsewhere and this shows in the cabin materials and ergonomics. The layout and style seems antiquated but this won’t be a problem for fans of retro. The big ventilation knobs, simple buttons and stalks are easily controlled and the only modern absentee is a trip computer.

Perhaps that was done on purpose as the FJ is only available with a high-compression, 200kW/380Nm 4-litre V6. Delivering its power to two or four wheels via an old but smooth five-speed automatic gearbox, it allegedly helps itself to an average of 11.4L/100km – I think mid-teens are more likely.

Toyota has addressed this with a recent update which adds a secondary tank to make up a total volume of 159L. Another big novelty is Crawl Control which allows the FJ Cruiser to climb, ford or descend treacherous terrain on its own, at variable (slow) speeds controlled by a rotary knob on the cabin’s ceiling.

The FJ retains its sturdy, ponderous yet unbelievably comfortable suspension which means it won’t put up with much abuse through fast corners. In a straight line, though, the lively V6 propels this 2,030kg car to 100km/h in under eight seconds and on to a limited top speed of 175km/h.

Parking this brute in your driveway requires N$476,500 of your moolah. The Sport version retails for N$500,200 and both come with a 3-year/100,000km warranty and 5-year/90,000km service plan. If it’ll last as long as that old blue ‘Cruiser is questionable, but its chances are better than most other new cars.