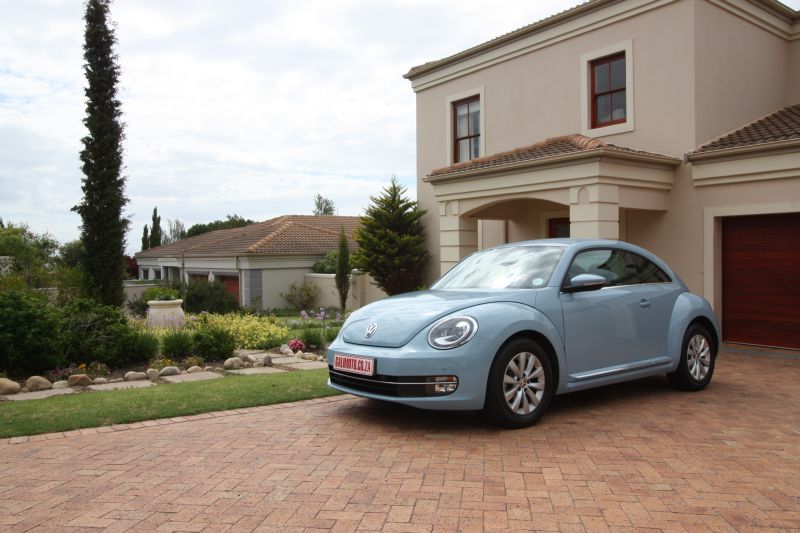 The Volkswagen Beetle is undoubtedly one of the world’s most successful vehicles, racking up millions of sales in its original, basic shape. But much like its fellow sales record holders, on top of being rather common, the Beetle always left me completely cold and disinterested.

The “New Beetle” appeared in 1997 but was simply too round and cute to be taken seriously. Hardened Beetle enthusiasts shot it down as a miserable fake because it was based on a Golf 4 and abandoned all the original’s trademarks: air cooled, rear-engined, rear-wheel-drive and above all, affordable.

Despite all this, the new iteration appealed to enough people worldwide to rack up just over a million sales. Yet again, I wasn’t one of them. So you’ll excuse my scepticism when my first test car for 2013 turned out to be a Beetle.

A short stint in a higher-spec model at the end of last year already left me impressed but after a few days with this powder blue baby bug, I’m turning into a bit of a fan. What’s even more puzzling is that you’re now looking at the entry-level, bog-standard version with a 1.2-litre (yes, one point two) engine.

It didn’t stop there. Friends and family who described the previous Beetles with words like “meh” or “eww” were floating anywhere between excited curiosity and gushing admiration. Volkswagen can rest assured that their new 21st Century Beetle is a resounding success – I didn’t hear a single criticism in seven days.

I didn’t hear a single criticism in seven days.

Part of our car’s appeal was surely its sky blue paint and matching interior with colour-coded dashboard, door panels and seats. However, looking at the new car’s shape reveals inspiration from both predecessors; minus excessively cute roundness plus a few dollops of muscle.

The brochure even says “it’s a boy!”

Der neue Käfer is far from intimidating or nasty but a lick of dark paint should benefit the car’s flatter shape and better stance while making the few chrome highlights and snazzy lights pop a bit more. As this is a niche market and lifestyle car I would even go for a freaky colour, nothing less daring than red.

This would mean that, at least in “Design” trim, you would also have a freakishly colourful interior. Our specimen had matching powder blue paint across its entire dashboard, now featuring the old Beetle cubby hole with not a vase in sight. The panel continues on top of both doors and into the rear of the vehicle.

All leather seats (N$8,600 option on this model) also received a splash of blue, as did parts of the steering wheel. This car also featured hdd / navigation (N$18,000), parking sensors and tyre deflation warning (N$4,800), Bluetooth (N$2,000), Xenon headlights (N$8,200) and a detailed on-board computer with water and oil temperature, among others.

As detailed and intuitive as the navigation was, I would rather pocket the cash or spend it on a bigger sound system (N$8,000), a sunroof (N$8,800) or 18-inch wheels (just N$3,500). From what I can tell, it would also be wise to invest in a service or maintenance plan. That and Bluetooth should be free, VW. Sies on you!

As for those optional fat wheels, you may want to shy away from them if you enjoy a smooth, comfortable ride. This 1.2-litre model rides on tyres with bigger sidewalls which help the Golf 7 platform to provide wonderful ride comfort and a modicum of handling fun before over-steer sets in.

At this point you’re probably expecting me to tell you that the 1,197cc engine is weak, unresponsive and boring. Please believe me when I type that the direct opposite is true – this diamond of a motor is very gutsy and, being mated to a six-speed manual gearbox, a hoot to drive.

Major speed freaks could be disappointed as 0-100km/h takes 11 seconds and top speed is 180km/h, yet the tiny engine’s mid-range punch is phenomenal. It runs out of ideas below 1,500rpm or above 5,000rpm but will eagerly surge forward in any gear thanks to maximum outputs of 77kW (105hp) or 175Nm.

Fuel consumption is supposed to be just 5.9L/100km but we averaged around 7.5L/100km from the 55L tank. Other noteworthy dimensions are the 310L boot which extends to 905L with the rear 60/40 split seats folded down.

Rear passenger room is a little tight though, as with most coupés.

This Beetle also has excellent safety equipment and the obligatory comfort features at a price of just N$235,400. Thanks to that lively little engine, I advocate the 1.2 TSi as the best Beetle model out there. For the same price you could get an entry-level Golf or a big Polo. I know which one I’d take…