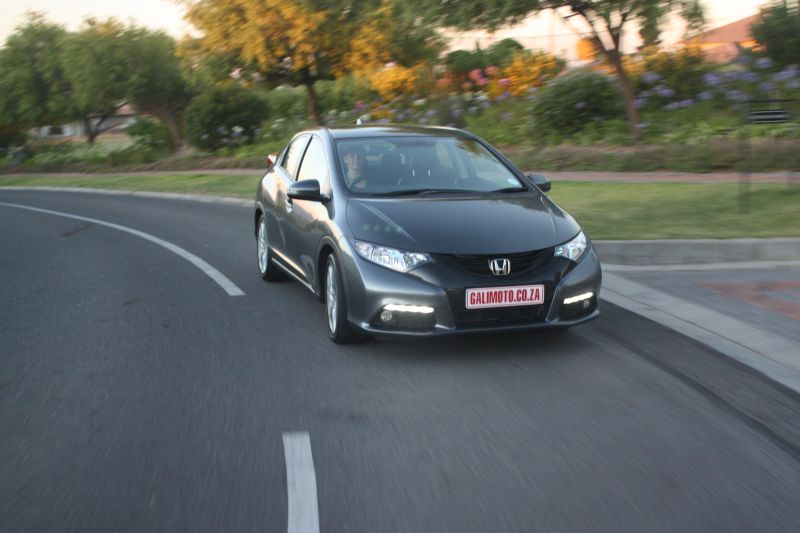 Guinea fowl are quite sweet, mostly in paintings or on a bed of raspberry jus with some mushroom sauce. Live specimens like the exploding and unbelievably noisy population opposite my home are a nuisance at best, even more so when they interfere with our work.

The Galimoto Media office was buzzing with excitement early in December as we were about to welcome our first long-term Honda, a cute little Brio Manual. Unfortunately, on its way to our premises the Brio impacted a guinea fowl at speed and was swiftly returned to fleet management for repairs.

Although we were spared the gaudy scene of the accident, reliable sources reported that both bird and automobile took enough damage for us to receive a replacement vehicle – this dark grey metallic Honda Civic 1.8 VTEC Executive hatchback which had been patiently waiting to be swapped for the Brio.

Honda launched the Civic hatchback / 5-door a few months ago and true to their fastidious engineering, tinkered with every imaginable aspect of the vehicle. Everything is slightly better, a little lighter and more efficient to culminate in a vehicle which is even more accomplished than its predecessor.

Honda Civic gen eight shocked the world a few years ago with its UFO design and must’ve worried its designers senseless when it came to drawing this new one. Our overall impression is that they pulled it off but we miss four things: the triangular exhaust pipes, weird door handles, glass nose and starter button.

Other than those omissions, the new Civic hatch is a real looker which reveals more clever design detail over time. The front looks aggressive, even more so in a light colour with its grey centre section while the profiles stretch over that strong wedge shape and some rather tasty creases.

Its backside has that notorious split glass hatch (with improved visibility) and very funky rear light clusters, joined by a floating third brake light between the aforementioned glass areas. Especially when viewed from the front of the car, down its flank, Civic’s rear lights protrude from its curvy metal like Jar Jar Binks’ eyes.

Some testers took a little longer to warm to our holiday car but soon compliments were flying at the sparkling LED daytime running lights and this Executive model’s 17-inch alloys. The interior also had to wait a while before everyone gave it the thumbs up.

Trimmed in leather (Executive or Exclusive), all seats were deemed to be comfy and supportive with sufficient room for four to five adults. The rear seats contort in many ways and obviously fold completely flat to raise an impressive 477L boot space to 1210L in order to transport a Christmas tree.

Honda stuck to their two-tier spacecraft dashboard yet ergonomics and usability have been improved. The easier audio system falls in line with other Honda products and its simple information screen is controlled from the fat-rimmed, adjustable multi-function steering wheel; as is the cruise control and speed limiter.

We would’ve liked more information from the on-board computer like a range indicator or media browsing capabilities. Also, Bluetooth should not just be reserved for the top-spec Exclusive model. Another annoyance was that the information screen was barely legible during the day, even at max brightness.

On that subject, the Civic hatchback’s main/high beam was disappointing in most conditions and the car often left us in the dark. Its home lighting feature only responds to one open door – close that and everybody else outside the car is suddenly plunged into darkness.

However, it wasn’t all bad. Passenger comfort is superb, the dual-zone climate control ferociously fights off hot December days while the suspension offers good damping capabilities. The rear passengers experience more jolts and bumps than those at the front but the Civic’s ride is on par for its market segment.

Ditch the passengers, chuck it into some corners and the new Civic hatch even provides enjoyable handling. It offers decent steering feedback, excellent grip levels from its expensive Bridgestone rubber and sufficient warning (with comprehensive stability assistance) before handing over to progressive under-steer.

Torque steer remains largely absent, mainly because there isn’t much torque to start with. Road and tyre noise are minimal, wind noise is within limits so the Civic is a great long-distance companion. Mechanical sound intrusion is equally subdued unless you start red-lining that VTEC screamer of a motor.

Initially, we were underwhelmed by the 1.8L four-cylinder petrol’s performance (104kW/141hp/174Nm), especially when compared to its turbo-charged contemporaries. It lacks torque and thus requires high revs and a lot of action from its slick six-speed manual gearbox to accelerate or maintain uphill momentum.

Things improved slightly when we switched off its ECON mode – a system which dilutes engine and ventilation response in aid of fuel economy. We ran two successive tanks of fuel with and without ECON, the lethargic mode improving consumption by a mere 0.2L/100km and range by about 20km.

The system may be helpful at constant or low speeds (as would a start/stop function) but it almost cancels its own benefits because we often had to thrash the engine just to keep up with traffic or get out of trouble. In other words: you may as well switch it off for peace of mind, better response and similar consumption.

After a few tanks we established that Civic 1.8 will return between 7.5 and 8.5L/100km, depending on driver and routes. After a pre-dawn blast across Stellenbosch back roads, consumption neared 10L/100km while a very leisurely cruise around town and on the highway yielded just over 5L/100km.

The central rev-counter features gear suggestions while the LCD speedo is flanked by economy colour bars – which are only useful if you plan on coasting to your next destination. Once you get there, be mindful of parking in nose-first bays as the car’s relatively low front apron won’t clear a standard size pavement.

We measured 0-100km/h in 9.2 seconds while going through the Civic’s closely-stacked gearbox. 130km/h in top gear registers about 3,000rpm which is aimed at the engine’s elevated maximum power outputs – torque at 4,300rpm and power at 6,500. And remember to turn off that green button when overtaking.

Honda may have to catch up with its turbo-charged peers but we’re not necessarily fussed. For starters, this car’s performance is acceptable for everyday commuting and people who haven’t been exposed to turbo torque monsters. Secondly, there’s far less chance of expensive maintenance or reduced longevity.

And while we’re on that subject, our grey Civic 5-door went through several pairs of hands and had to endure office commuting, Christmas shopping, gales, road trips, rain, dusty farm roads, heat waves, equestrian outings, speed humps and the odd Sunday drive. It did all of this without a single rattle or fault.

At N$270,300 this Civic isn’t exactly a bargain but offers cheaper and dearer models (including automatic shifters) to catch sales either side. When compared to its competitors, the Civic surely looks the most outrageous and can take on the best of them when it comes to efficiency, quality and packaging.