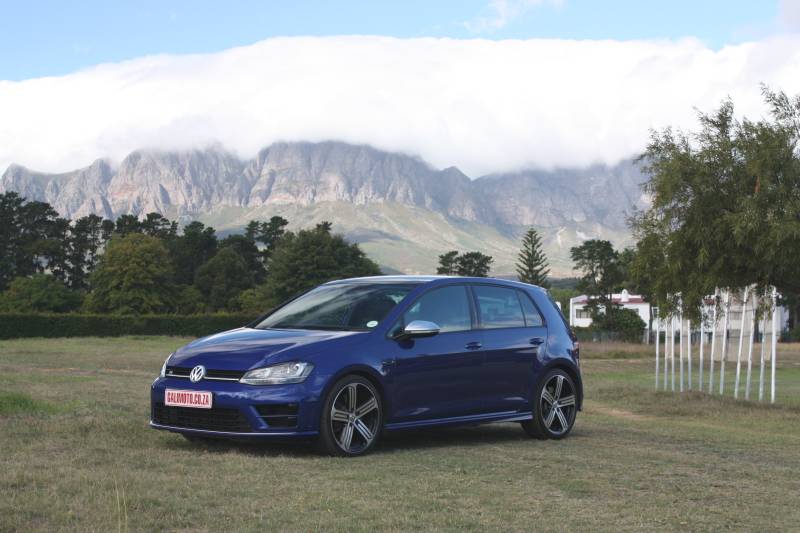 Just when you thought it was safe to venture out into the hot hatchback-mad streets again, Volkswagen comes to the late night drag racing party. Their venerable GTi embodies the hot hatch rather well but who will defend the family name at the traffic lights? The Golf R, that’s who.

My reasoning for the GTi’s high praise is that VW has not fallen into the trap of burdening the front-wheel-drive setup with too much power. Yes, I’m typing at you, Opel and Renault. Mercedes went even more bezerk but at least their A45 AMG has four-wheel-drive and – what do you know – so does the Golf R.

You see, no matter how clever those front wheels may be, trying to put over 200kW down cleanly will usually just end in black lines and white smoke. VW’s answer is 4Motion, a highly intelligent four-wheel-drive system with Haldex 5 coupling.

Which brings me neatly to my biggest problem with our test unit – that awful DSG gearbox. I’ve been moaning about it for years and I hope more people will soon realise how jerky and unpredictable it is. Slow movements like traffic jams, parking and reversing are a nightmare – the accelerator response is dreadful.

Golf R comes with a start/stop system which helps to bring consumption down but it also makes for very awkward jolts and leaps when moving off again. Also, our test car alleged that its starter system was faulty for about half a day, after which it mended itself and pretended that never happened.

Cruising and everyday driving highlights another frustration of the DSG. It short-shifts most gears and relies on the considerable torque when more speed is requested. Down-shifts are reluctant and kick-downs aren’t exactly speedy, something that Sport mode attempts to remedy. Attempts.

You see, in Sport mode the Golf R drives around at 4,500rpm in every gear and refuses to shift up. Something in between would’ve been nice, VW. You may, of course, take matters into your own hands in Manual mode with shift paddles, where this gearbox becomes brilliant. Utterly, utterly brilliant.

This will tie in nicely with its well-weighted steering, excellent grip, non-existent body roll and grumbling Boxer-ish exhaust noises. They can get boomy with prolonged use but thankfully those four fat exhaust tips quieten down when you don’t touch the throttle, occasionally popping or burbling with gear changes.

Another warning for potential buyers: much like its competitors, the Golf R is unbelievably hard. Back injury hard. We even detected a small rattle in the usually unbreakable Volkswagen cabin (gasp!), so hard is the ride. On the plus side, the pair of fantastic sports seats with three-stage heating is very comfortable.

The adjustable, flat-bottomed steering wheel has a bewildering array of cruise control, trip computer and audio buttons but is extremely direct in its actions. Lock to lock takes less than a full turn while the car’s turning radius suffers a bit due to those enormous 19-inch Cadiz wheels.

Golf R’s cabin is a feast of quality materials, crisp displays and perfect fits. The sober, functional layout is mirrored in its touch-sensitive infotainment system and excellent trip computer. This sits between a rather strangely-marked speedo and a rev counter with slightly optimistic red zone.

Using the DSG’s launch control, we reached 100km/h in 5.5 seconds while our weekly average fuel consumption was just over 9L/100km. The Golf’s versatile interior with 60/40 folding rear seats also helped to move bulky items but caution is advised with fragile items because of that hard ride!

I could probably nag on about more stuff like the parking screen that stays on too long or Bluetooth streaming which gets caught in folders but all this doesn’t matter. The Golf R is built for hard-core enthusiasts and thanks to its immense power and handling they won’t care a bit about any of this.

Personally, I’d wait for a Manual but I’ll let you be the judge of that. This Golf R DSG costs N$498,000 with a 5-year/90,000km service plan, the few optional extras like panoramic sunroof, high beam assist, rear camera, adaptive chassis and media upgrades being reasonably priced.