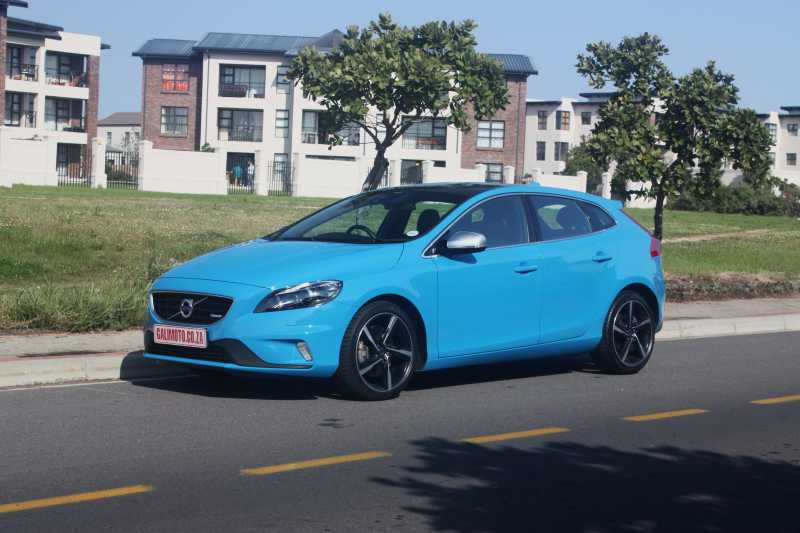 Today I bring you more inside news. The Volvo V40 and its many models is the car I’ve reviewed most in 2013. Happily, the V40 is one of my favourite cars right now and I’ll gladly review every single one. The topic of this review is the top-of-the-line, muscular T5 R-Design.

…the V40 is one of my favourite cars right now…

Although Volvo is now owned by the Chinese, their new masters allowed them to continue building innovative, crisp products – much like Jaguar and Land-Rover. The V40 is an estate slash hatchy take on the compact executive S40 range.

T5 means there’s quite a large turbo-charged petrol engine slumbering under its bonnet and R-Design tells you that the car has been infused with some sporty bits. Our test mule was coated in Rebel Blue, probably the most man-made colour I have ever seen in my life.

Not to be mistaken with Polestar Blue, the shrieking blue V40 drew an unprecedented amount of attention wherever we took it and, although the phrase was initially coined for the Polestar colour, we eventually referred to our car’s hue as Swedish Racing Green.

…referred to our car’s hue as Swedish Racing Green.

Never mind the general public and most of our acquaintances, even seasoned members of our team admitted that this car brutally silenced their opinion about Volvos being boring pensioner’s cars. The C30 T5 R-Design I tested some years ago had a similar effect on observers and its driver.

Where the C30 was still available with a six-speed manual gearbox, the V40 equivalent relies on a six-speed Geartronic automatic with Sport and tip-shift functions. Visual clues to its beefy power are huge two-tone wheels, bigger skirts and bumpers as well as two chrome exhaust tips.

Its interior features sober black leather, sculpted front seats with embroidered R-Design logos, blue instrumentation and an eye-catching design on its floating centre console. Electric this and auto that are all present, as are City Safety, many airbags (including pedestrian), a start/stop system and various driver aids.

We discovered many wonderful things in the infotainment system, most notably a few settings for steering feel. The hardest option did tighten things up a bit but thanks to the V40’s impeccable road manners and the R-Design’s sportier chassis, even its regular setting will do.

The suspension isn’t adjustable and nudging on slightly hard, especially when compared to regular V40’s. It improves at higher speeds and seems like a necessary evil to deal with all that T5 power. R-Design is also available with a D3 turbo-diesel engine (N$363,300) but speed freaks will want this T5 (N$397,100).

That’s a lot of power for the money.

Its 2.5-litre in-line five-cylinder turbo-petrol pumps out 187kW (254hp) and 360Nm, overboosting to 400Nm if you wish. That’s a lot of power for the money. Thankfully, power delivery is reasonably clean, torque steer is negligible and the ferocious traction control only retards, not kills, forward momentum.

Especially to owners of the previous Ford Focus ST who’ve discovered that their beloved car is getting old and/or too small for a growing family. Well, my ST lovin’ friend, grab the wife ‘n kids and take your baby for its last drive down to a Volvo dealer… if we still have one.