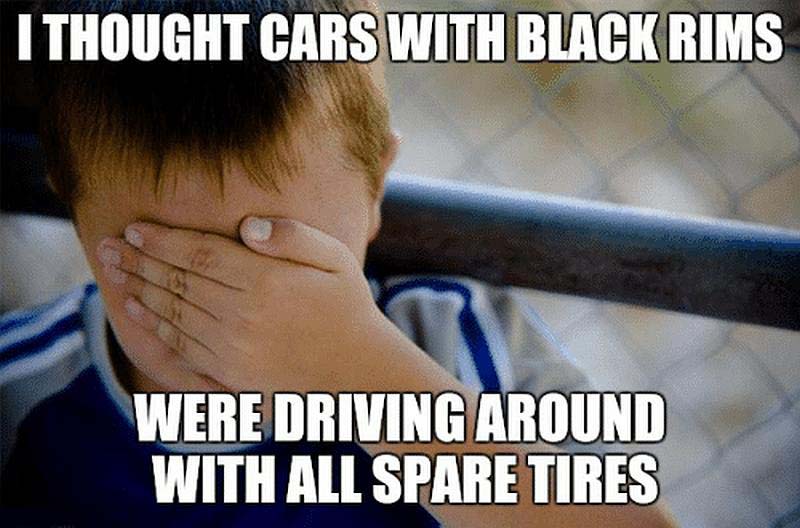 Strolling around with a toilet paper tail. Arguing a case you lost five minutes ago. Slurring incomprehensibly while tripping over your own feet. There are many ways to look a fool and the ultimate car embarrassment, in my semi-important opinion, is painting your wheels black.

“It looks cool!” seems to be the only feeble explanation offered to me by friends who’ve just committed this automotive crime. No, it doesn’t. Your 2005 Hilux double cab now looks like it’s on steelies and/or you had no money to pay for proper, shiny wheels.

Worse still, that 530d had some tasty alloys to start with but your click-click can of black makes it look like it’s on winter tyres; complete with cheap black steel rims. Black rims don’t work on a shiny car, they hardly suit a matt black car so why did you think your Beemer would look cool?

Shameless laziness because you never have to clean the brake dust off them? Fooling criminals at night because it looks like your car’s wheels have already been nicked? And if you really, honestly think they look cool, I can’t think of a single car that looks good with black wheels. Not one. Unless you’re a drug dealer.

Oh, and movie cars don’t count, so forget about the Batmobile or K.I.T.T.

“Check out my cool new rims!” barks a friend at a braai and proceeds to show everyone invisible wheels on his curvy border iphone Galaxy X20 Plus. They’re black, genius. You’ll need a lot more than the phone’s fake-branded triple-LED dual-lens flash to capture those properly.

No. Black wheels look hideous, the concept is stupid and its only merits appear to be laziness and a misplaced illusion of splendour; based on crime. Come to think of it, I think I’ll start reporting every black-wheeled car to my local cop shop for possible dealings in narcotics.

Maybe that way we’ll get rid of this atrocious fad.

2 thoughts on “The dirty plague”