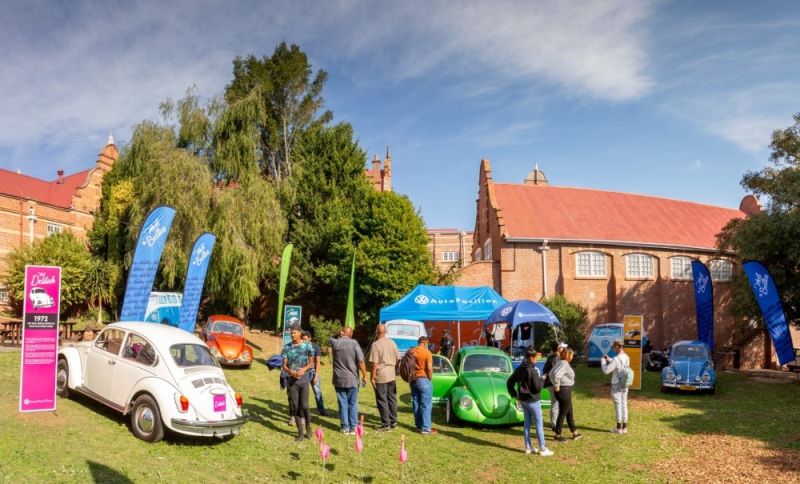 Makhanda (Grahamstown) – Volkswagen Beetle enthusiasts of all ages are flocking to an interactive exhibition brought by the VW AutoPavilion to the 2019 National Arts Festival in Makhanda.

The Meet the Beetles display, which is normally a permanent feature at the AutoPavilion in Uitenhage, took to the road to delight festivalgoers who are fans of this iconic car.

Since the start of the festival on 27 June, the main attraction of the display has been Foxy Lady – the 1972 Volkswagen Beetle that is the central point of a live art installation for the duration of the Festival.

As nearly all the visitors to the display – both in the past week and at last year’s festival – have a personal Beetle story to tell, they are offered the unique opportunity to record their story and take a photo in Foxy Lady. These photos and audio recordings then form part of the installation, through a large screen and speakers on the site.

Joining Foxy Lady in the showstopper exhibition are some of her Beetle siblings: the beautiful Nomhle, who was lovingly restored by a woman; Delilah, who is still an original in every sense; Herbie the film star; and Matti, the baby of the Beetle family – and the last of the 288 353 Beetles manufactured in Uitenhage.

The Volkswagen Beetle remains an icon in the rich cultural history of the Eastern Cape. The first locally produced Beetle rolled off the production line at the Uitenhage plant on 31 August 1951, becoming a fast favourite and making mobility affordable to many – including the hands that assembled these cars. Aside from being one of the engines behind the economic resurrection of Germany, the beloved Beetle went on to become one of the top selling vehicles in the world and the fourth most influential Car of the Century.

To experience the iconic journey of the People’s Car, visit the Meet the Beetles display on the Victoria Girls High School grounds, adjacent to the Village Green. The festival runs until 7 July.

Source: The Communications Division of Volkswagen of South Africa