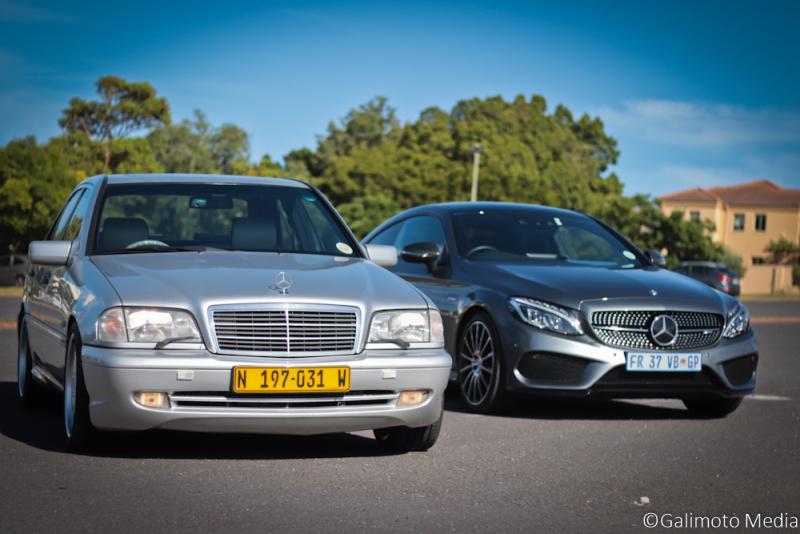 I appear to have some magical and completely spontaneous connection with Edinburgh. My sister-in-law stems from the Kingdom of Fife, my wife has a few roots there and also found her business niche in the Scottish capital, and as far as I can tell, my third-youngest cousin has mastered just about every course offered by the city’s university.

Thus it came as no surprise when I discovered that my latest automotive purchase started life in Edinburgh on March 16th 1998. The silver W202 C43 AMG boasts with high specifications and an equally impressive amount of owners, if my powers of deduction and the vastly far-flung service stamps are correct. 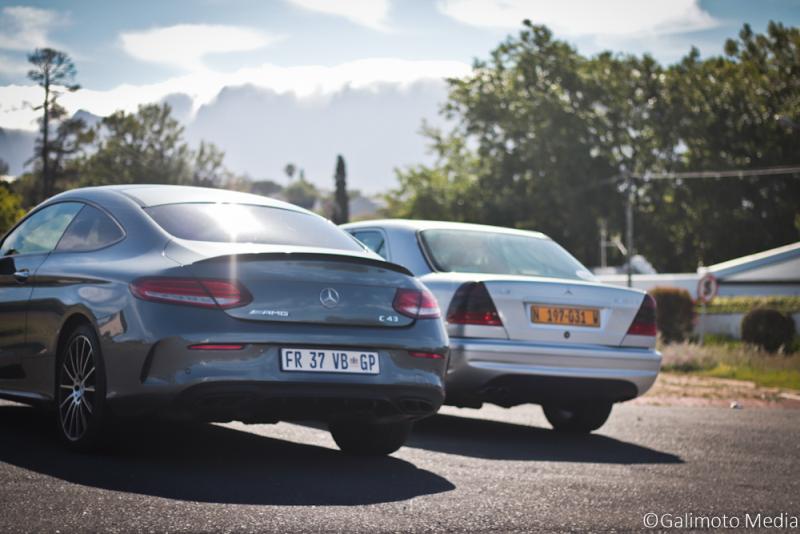 Who fitted the 18-inch wheels and which owner thought it wise to add faux carbon fibre vinyl to the rear bumper? These questions often spiral in my mind but especially now that its relatively square and reserved shape is parked alongside my latest test vehicle – a Mercedes-AMG C43 Coupé. The new C205’s fluidic two-door shape is so much more daring and exciting, never mind the fact that there were no two-door ‘202’s or ’43 AMG’s back in the nineties.

Mercedes-Benz only offered an AMG body kit (C36 or C43) for their W202 sedan in Southern Africa and my love for the sedate-looking 90’s Mercedes started with a pre-facelift C280. Alas, it did not wear an AMG dress but I quickly fitted a set of replica AMG Monoblock II wheels. They gave me nothing but trouble.

I ran it for a decade – the longest I’ve ever owned a car – and also ran after this C43 AMG when it passed me with ‘For Sale’ signs. “Hey man, I think you better stop” said the driver’s mate, “there’s some guy running after us.” 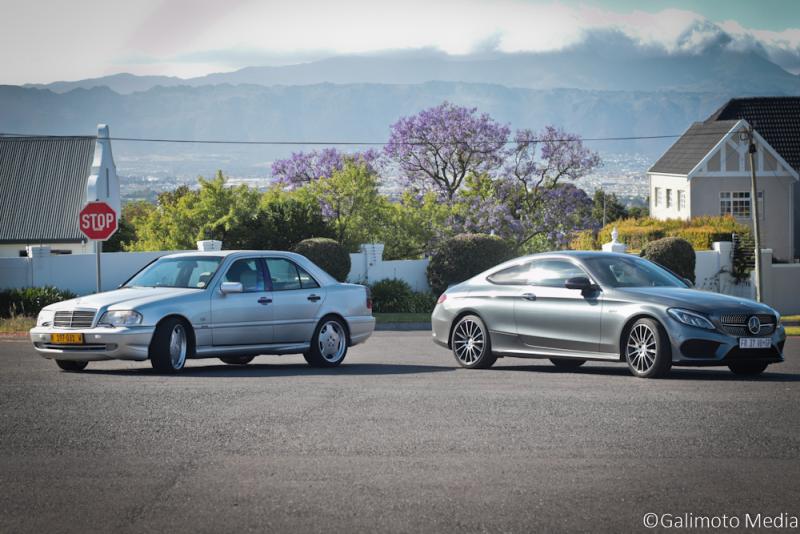 A world of difference

The new C43 arrived with less hassle but as a motoring journalist I am only given its key for a week. Luckily, seven days are more than enough to fully appreciate a highly advanced and accomplished car like this, and just a few miles into my daily routine I grasped the character of this car. It actually has two, but more of that later.

What immediately struck me was its visual appeal, as observers range from smitten to rapturous. My photographer takes a time-out to join me in observing the two AMG’s. “It’s like they’re from different manufacturers. Different planets, even?”

Ye olde ‘202 is only acknowledged by true anoraks although AMG has enjoyed great recognition (and sales) since officially arriving in southern Africa from about 2000. The Mercedes sub-brand even posted increased year-on-year sales for 2017 in countries whose economies could only be described as ailing. South African and Namibian car sales continue to slump yet the beasts from Affalterbach enjoy increased sales year after year. 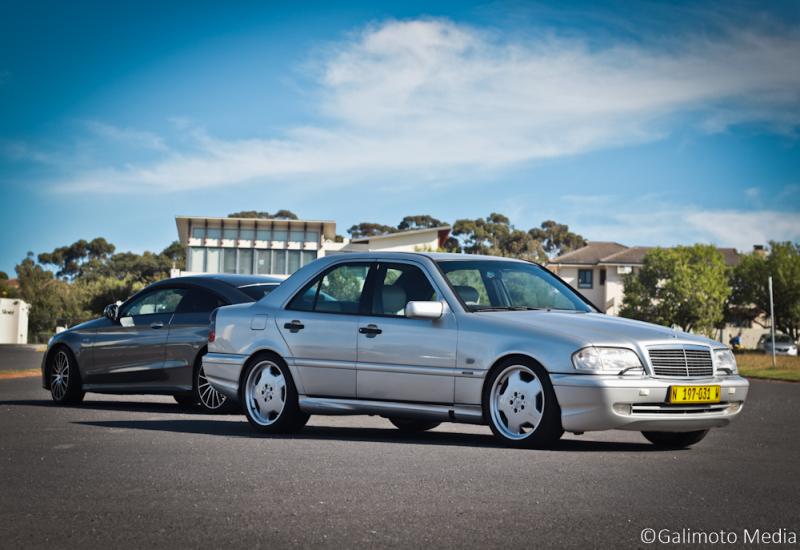 Buyers in these markets can now choose from an unprecedented 40 models, almost matching the performance brand’s home market. Notable absentees are the estate versions or “station wagons”, all of which have become swear-words in SUV-mad southern Africa.

This new 43-series makes up a sizable chunk of the local AMG offerings with the Mercedes-derived 3-litre Bi-Turbo petrol V6 appearing in the C-Class coupé and sedan, four-door E-Class, SLC as well as the hugely popular GLC and GLE SUV’s and coupés. Only available in conjunction with 4 Matic, the high-tech motor spits out maximums of 270kW or 520Nm in everything except the E43; where it delivers 295kW. That very model – a pearl black Mercedes-AMG E43 press demonstrator – was my first introduction to this engine. 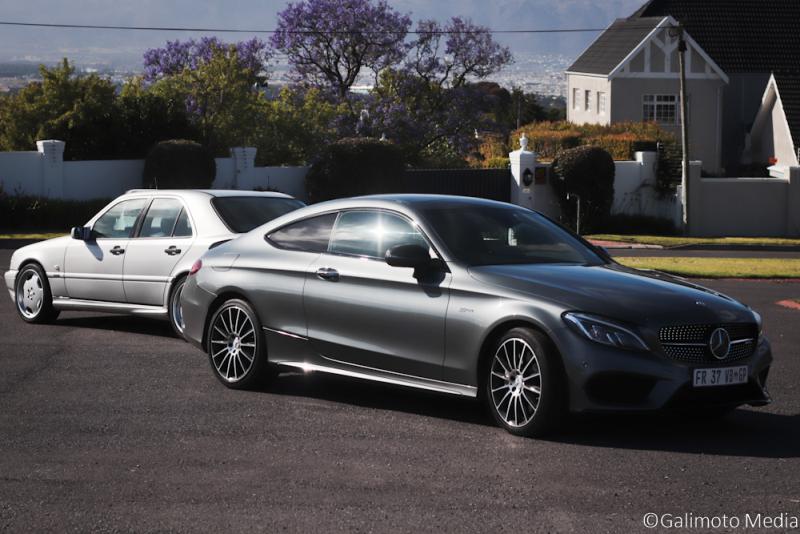 Technically, I initially met my ’98 C-Class on New Year’s Day 2015, almost two years before buying it. Back then, on that boiling hot Namibian summer day, I couldn’t believe my eyes. A real C43. In Africa. The owner had just imported it with a fine collection of dents and scratches, quite a bit of mileage and that dreaded tin worm – rust. No matter, I desperately wanted the car and exchanged contact details with the good man; only to never hear from him again.

A few months after first seeing the W202 I gave the owner a hopeful call and learnt that he had sold it to a friend. Gutted. Utterly devastated. My better half will testify that I was misery personified for quite some time because nothing is more heart-wrenching than having a unicorn within your grasp and losing it. 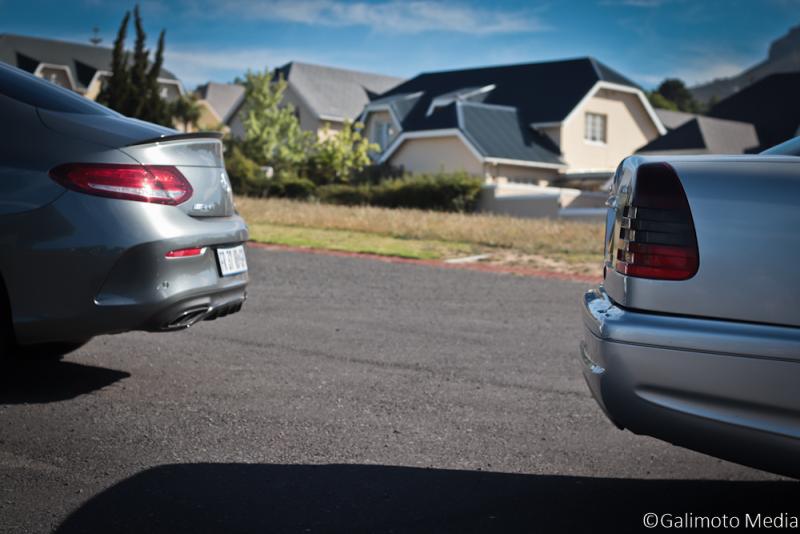 Ironically, my track record with modern AMG’s tends to be similar. In that whirlwind world of press cars, the popularity and power of these sports car slayers guarantees that the occasional booking is crossed out with “damaged” as a foot note. Happily, the new ‘43 I piloted for a week arrived in one piece but it was already sporting two different makes of tyres at 6,000km (3,700 miles).

It also produced some dashboard creaks in the first few yards of driving, which didn’t exactly make me feel patriotic as all right-hand-drive C-Classes since the W203 are assembled in South Africa. AMG engines are sent as complete units from Germany. Further initial gripes were a rather firm ride, no seat-belt butlers (optional extra), too many gears and a rather uninspiring exhaust note. 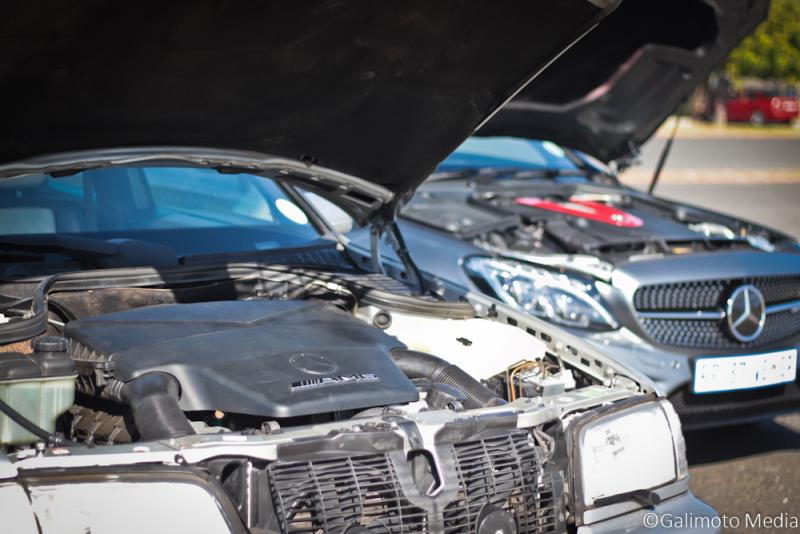 While I’m dishing out critique, I have to lay into the W202’s overarching stodgy feel. Compared to the nimble C205 it feels like you’re piloting a ton of bricks. On the upside, it also appears to age like a cube of masonry because a few rattles and two squeaky seats are all that this car has come up with after an indicated 157,000 miles. As a former 202 disciple, I also find a comforting feel of solidity in the starchy nature of these cars. The 43 model adds a harder ride and almost solid tyres to the mix.

Of course once should not forget the 225kW V8 engine, a mildly-tuned derivative of the M113 Mercedes V8. The twin-spark, three-valve-per-cylinder setup produces its trademark hoarse growl and up to 410Nm of torque to add a big dollop of speed and character to the late 90’s sedan. Given full throttle it fizzes and bellows up to 6,200rpm while smoothly sliding through its five automatic gears but it is the motor’s low to mid-range clout which gets my utmost approval. Even with 255 section rear tyres and 1,970kg on its ribs, that flashing orange triangle often makes an appearance. 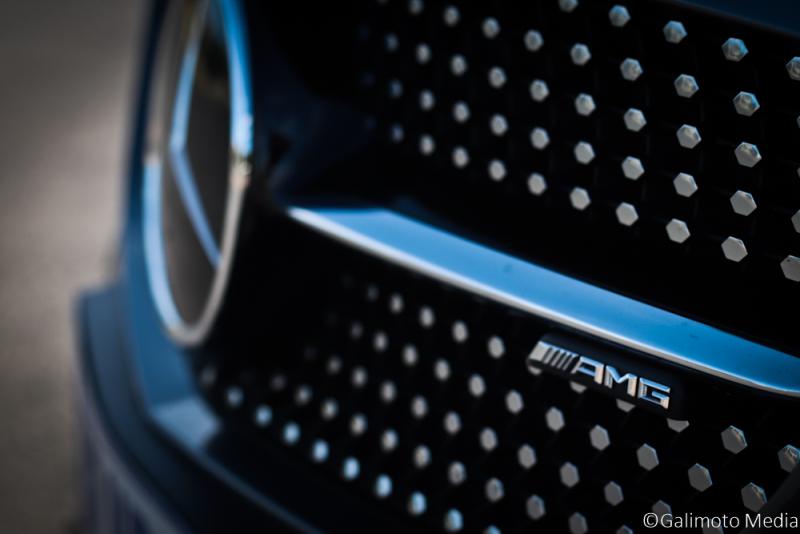 That mild disappointment from the new Coupé drastically changes once its mechanicals warm up and one selects Sport (or Sport Plus) from the five drive modes. The ride solidifies even more, steering feel and throttle response both sharpen up while the nine-speed automatic gearbox is similarly agitated. And as a bonus, the car opens its optional exhaust flaps to maximum neighbourhood annoyance mode.

NOW we’re talking. I would’ve leaned towards my old C43 for the “fun” and “sound” awards, but the new AMG brutally claws them back when the right buttons are pressed. The overeager drive train delivers instant shove while it produces a repertoire of roars, bangs, crackles or a spine-tingling V6 trumpet concerto. I’m happy to admit that a car’s sound has always been an influencing factor for my purchases and in this regard, the new car truly is from a different planet.

The 1998 model can’t compete with this button-induced split personality although it’s far from being a one-trick pony. Sometimes I wish the ride was a bit more forgiving, although the aforementioned 18-inch wheels get part of the blame, yet at no point have I longed for more (or less) V8 rumble. Better fuel efficiency or a bigger tank would be nice but with four doors and folding rear seats, the original C43 AMG can also be a practical family saloon.

AMG only made about 4,000 of them in two years, as a sedan or estate, of which less than half were right-hand-drive and none officially made it to Africa. I since learnt of a maroon example in Gauteng and that there were less than 200 left on British roads in 2017. This relative rarity even prompted my father to offer a space for the slightly faded W202 in one of his garages… because mine are filled with old Mercs. 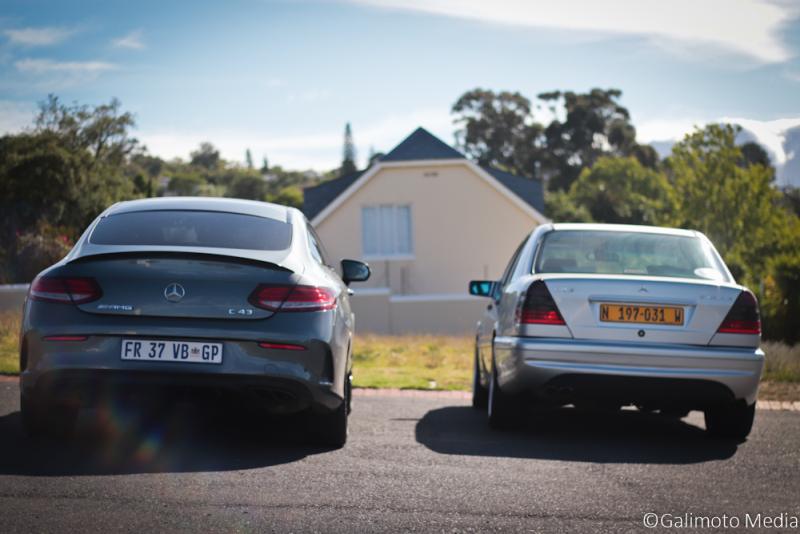 I wanted to hate the new Mercedes-AMG C43 Coupé, I honestly did. My plan was to methodically expose it as an imposter with useless modern gadgets and back-to-front badging which has nothing to do with the number 43. OK, that last bit is true but the new line of Biturbo V6 AMG cars is mesmerising and accomplished.

The only thing I am truly upset about is that the new C43 has made Google searches jolly difficult for owners of the original.