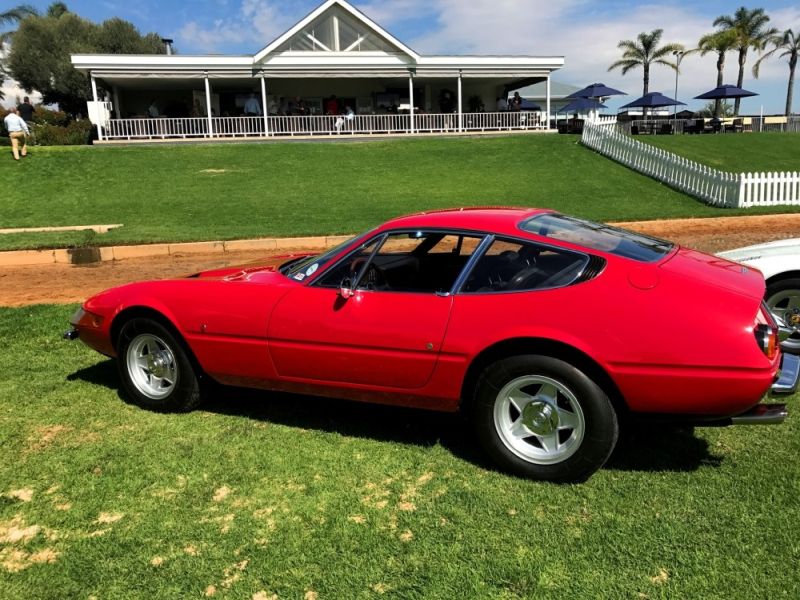 At the third Concours South Africa, to be held this year on 10-12 August, Johannesburg Ferrari afficionado and racing driver Libero Pardini will be showing his 1970 Ferrari 365 GTB/4, otherwise known as the Ferrari Daytona.

The Ferrari Daytona’s appearance at the 2018 Concours South Africa is significant as this year marks the 50th Anniversary of one of the most iconic Ferraris in the company’s 71-year history. And the stories Libero has to tell about his Daytona deserve to go down in international folk lore, regarding this famous front-engined Ferrari.

“I have owned Ferrari Daytonas since the end of 1973 and I bought my first one in the midst of the world’s biggest oil crises. People told me I was crazy, they said I wouldn’t be able to drive the car then, as there were fears that the whole of the western world would have no oil or petrol. Everyone was selling their V8s and buying little Datsuns! I told them, well if that happens, I will be happy to park the Daytona and just look at it! 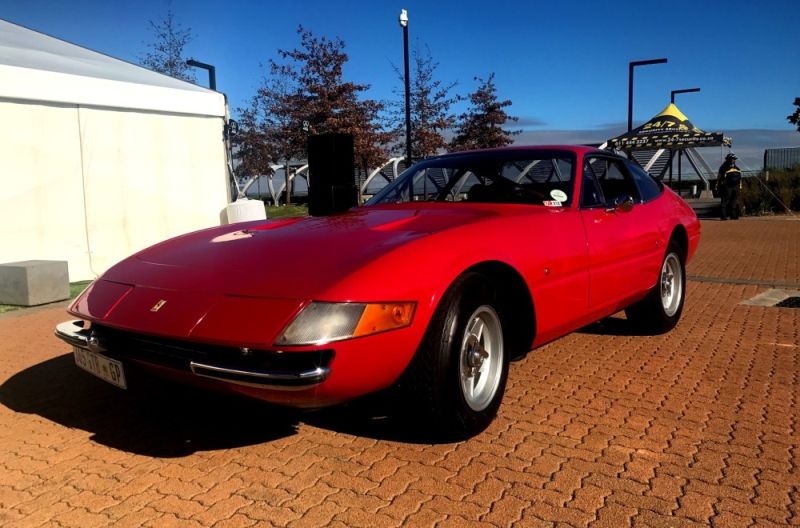 “I heard about this 1970 car through (well-known Alfa racing driver and dealer) Arnold Chatz, for sale at a Cape Town dealership. It had been brought in by TAK motors and sold to a chap in Namibia, who then sold it to this dealership. I closed my butcher shop in Johannesburg at lunch time on a Saturday, flew down to Cape Town, and handed over a cheque. I have to admit, I bought that car for a song, because everyone was panicking about the fuel crises.

“The next thing I realise, I’m about to run out of fuel, so I creep into the first small town I came to, just after dark. Another thing then, you couldn’t buy fuel after 6 pm in the evenings because the country was in crises mode, and everyone had to preserve what fuel we had. So I went to the small town’s  police station, explaining that I had just bought the car and didn’t realise how heavy it was on fuel.

Libero duly took this policeman for a flat-out ride, then he was obliged to take another policeman for a ride, then another, and the upshot was he received a special permit allowing him to buy fuel over the weekend. And that was valid for any fuel station on the route back to Johannesburg!

“After that I was sitting at over 200 km/h the whole way, even 220 km/h. The thing is, no-one was driving at night then, there was no fuel and no traffic! So I had the road to myself. It was wonderful! I was back in Jo’burg before dawn on the Sunday.”

Libero has had some other memorable trips in Daytonas, including the special Shell-sponsored anniversary of Ferrari in 1997 on a run from Johannesburg to Cape Town, via the Garden Route.

“I was leading a bunch of very fast cars, including Testarossas and the like, and that Daytona was good for long bursts right up to 250 km/h, 260 km/h. It’s a big, very fast car, meant for the open road.”

Pardini, it should be mentioned, is no stranger to high speed. He raced successfully in the 1960s, finishing second in the 1964 South African Saloon Car Championship driving a Valiant, and he once attempted the South African land speed record at Verneuk Pan in an imported Nascar-spec Dodge Polara! He also raced successfully in a Supeformance-modified Anglia and a Lotus Cortina.

Another great honour for Libero occurred when he was invited to Italy in 1997 to attend the international 50-year celebration of Ferrari. He and his Daytona were flown to Italy, courtesy of Alitalia, and he and fellow South African Ferrari luminary Giorgio Cavalieri spent a glorious week amongst Ferrari owners from all over the world, at an event attended by the likes of  Luca di Montezemolo and Michael Schumacher! 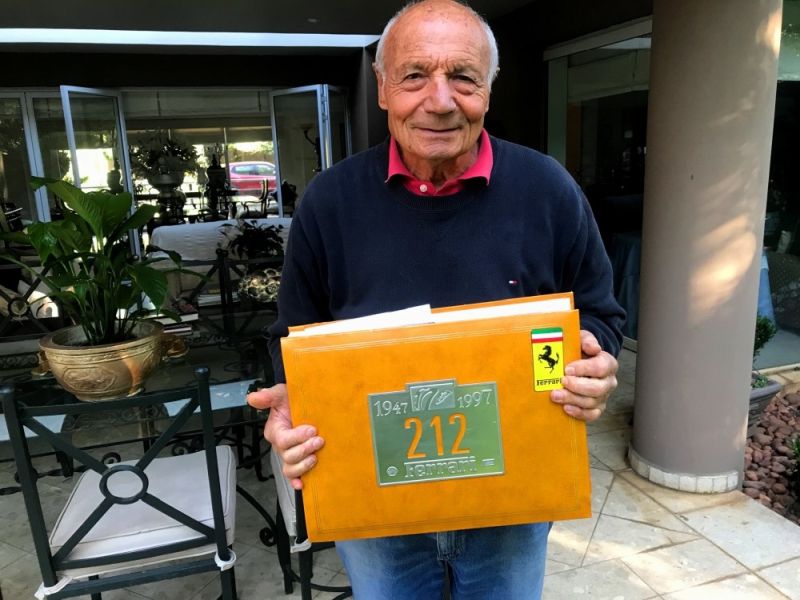 Libero says that there are a total of six Daytonas currently still residing in South Africa. Between 1968, when the first Daytona was shown at the Paris Auto Salon, and 1973, when production ended, a total of 1 406 Daytonas were built. Of these, 1 284 were Berlinetta 365 GTB/4 (closed body) models, and 122 were convertibles (the 365 GTS/4 model, also known Spyders). Some 156 of them are believed to be right-hand-drive models, a few of which were sold here by South African Ferrari importers of that time, TAK Motors. It is believed that less than a dozen Daytonas were sold here in total.

In the 1970s, the Ferrari Daytona was acknowledged to be the fastest car in the world, and was even listed in the Guinness Book of Records as such. It had an independently recorded top speed of 280 km/h and 0-100 km/h time of about 5,6 seconds

Initially, the car was produced with the so-called “plexiglass” front end, which referred to the headlights being covered in aerodynamic-friendly plexiglass. This styling quirk prevented the Daytona from being sold in the U.S., due to headlight safety regulations, so later models – post-1970 – had pop-up headlights, which were enclosed  beneath steel flaps when the lights were not in use.

The engine fitted to the 365 GTB/4 (and GTS/4) was a V12, following a design originally conceived by the famous Ferrari engineer, Gioacchino Colombo. The four-camshaft engine displaces 365 cc per-cylinder (hence the car’s official name), and multiplying this capacity by the 12 cylinders, gives the Daytona’s cubic displacement of 4 390 cc. The engine produces 263 kW, running on six twin-choke down-draught Weber carburettors. The numeral 4 in the model name denotes that the engine is a four-cam design.

An unusual feature of the Daytona is that the five-speed gearbox is rear-mounted in an arrangement known as a transaxle. Power is fed via a torque tube from the engine to the rear-mounted gearbox, mounted in tandem with the differential. The idea behind this was to give the car near 50-50 weight distribution, front to rear.

Practically all the Daytonas built were essentially steel-bodied cars, with production models having the bonnet, doors and boot lid built in aluminium. A few models later had steel doors, due to U.S. safety regulations. And racing versions were aluminium-bodied.

That beautiful knife-edged shape with its tapered rear end is credited to Leonardo Fioravanti of Pininfarina, then the most famous styling house in Europe. Production of the bodies was undertaken by Scaglietti of Italy, using the time-honoured method of hand-forming the body panels over a wooden “buck”, or mould.

Perhaps the most unusual feature of the Ferrari Daytona is that it was never named as such by Ferrari. Officially it is a Ferrari 365 GTB/4, and the Daytona moniker is said to derive from the fact that Ferrari had won the 1967 Daytona 24 Hour endurance classic, and fans of the marque christened it as such, in celebration of that famous 1-2-3 victory. Some rumours have it that Ferrari also considered naming the car the Daytona, but this step was never officially taken.

Interestingly, an alloy-bodied racing version of the 365 GTB/4 finished second overall and first in class in the 1973 Daytona 24 Hour race.​

This year’s Concours South Africa event will be hosted at the magnificent Steyn City Parkland Residence from 10 to 12 August 2018.

Giuseppe Plumari, CEO of Steyn City Properties, had the following comments to make on the hosting of this year’s event:

“Steyn City’s goal is to offer the ultimate lifestyle to our residents, and to become the top ranked residential address in South Africa and, ultimately, one of the most coveted addresses in the world.

“We are delighted to be associated with 2018 Concours SA. This, after all, is an event dedicated to quality and legacy; things that are built to last. This is an ethos we at Steyn City uphold, too. Much like the Classic and Vintage cars that will be on display, we too will be showcasing the very best that our creative team of architects, designers, artists, landscapers and engineers have developed to create the ultimate lifestyle.”