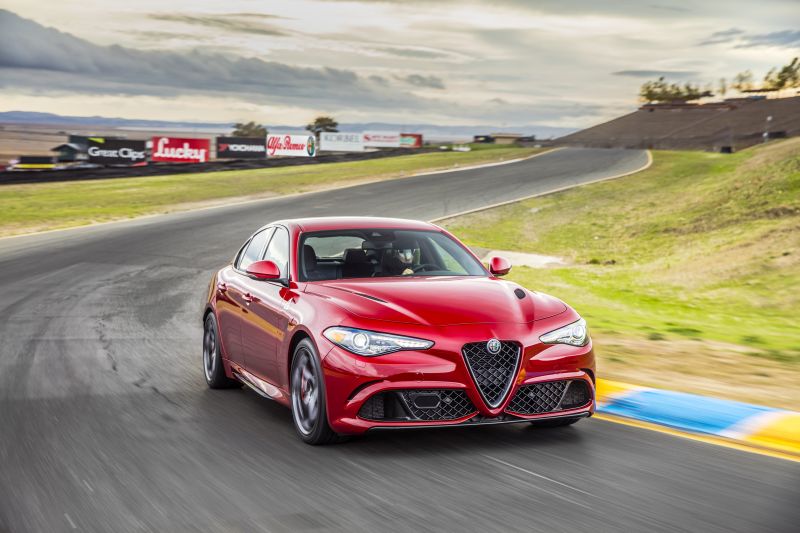 South Africans and Namibians have both had a long-lasting love affair with Alfa Romeo’s delectable Giulia. The passionate relationship (for Alfisti, at least) started 55 years ago when the original Giulia, the Tipo 105 Berlina, and its subsequent sub-types became the first Alfa model range to be built in South Africa in substantial numbers.

From CKD kits assembled at CDA (Car Distributors and Assemblers) in East London production moved to Rosslyn where Super and TI models were built. Interestingly, after 1970 South Africa was the only country producing Giulia models in right-hand drive.

It was also the birthplace of some rather interesting and exclusive Giulia derivatives, like the 1972 1600 Rallye – which was a more powerful 1600cc version of the 1300 Super with the 1300s single-headlight body shell, and the 2000 Rallye, which had a 2000 Berlina engine fitted to a 1600 Super body.

But then in 2015, as part one of Alfa Romeo’s revival plan, the new, reinvented Giulia was unveiled in Arese Italy, to high acclaim. With its pseudo-Germanic looks it may have lost some Italian sensuality and finesse, but it also has gained confidence and poise.

Its power dome, strong waist lines and distinctive kink in the C-pillar is elegant and graceful, yet aggressive. And in top-line Quadrifoglio Verde its svelte and new attire is even more uncompromisingly assertive.

Ultra-light materials abound. Carbon fibre is used for the bonnet, roof, front splitter, rear body inserts and the driveshaft, aluminium for the doors and wheel arches, and aluminium composite for the rear cross member – keeping weight down to 1,524kg.

The well-designed dash is dominated by the integrated Connect Nav 3D system and all the Giulia’s main controls, including the red start button, are incorporated in the new steering wheel.

Two user-friendly knobs on the gearbox tunnel adjust the Alfa DNA Pro selector and the hi-tech infotainment system. The sedan’s aura of exclusivity is completed by a plaque reading Race Edition number (here, 13 of 30) and a high-quality Harman Kardon sound theatre system.

In terms of Giulia’s interior refinement the QV matches the best its Teutonic rivals can offer (and even surpasses it with a decidedly more elegant infotainment screen solution), and underneath the skin Alfa returned to the original Giulia blueprint; mating a powerful engine with rear-wheel drive in a lightweight four-door body.

It delivers a whopping 375kW and a maximum twisting force of 600Nm, and coupled to an 8-speed auto gearbox, it’s claimed top speed is 307km/h and acceleration time from 0 to 100km/h is 3.9 seconds.

It also provides best-in-class emission levels (189 g/km CO2) due to an electronically-controlled cylinder disabling system and features massive carbon ceramic brake discs (which are exclusive to the Race Edition).

A host of driver aids such as the Integrated Brake System (IBS), an active suspension, Torque Vectoring system and an Active Aero Splitter, are included in the package, plus the full complement of safety systems.

Everything inside the Giulia QV – from the position and fit of the leather and alcantara clad seat, the steering wheel (embossed with the new Alfa Romeo logo), the big gear paddles to the control knobs and the pedals – just feels right.

Push the red button and the muted, urgent burble-gurgle from the twin-turbo V6 warns you of the motor’s suppressed potential. Turn the DNA Pro-selector past the “Dynamic”, “Natural” or its “Advanced” Efficiency (a first on an Alfa Romeo) to Race mode. Hold on tight to the sporty steering wheel, and squash the car’s accelerator…

With the Bi-turbo V6 engine bellowing – mimicking more Wagner than Verdi, more Beethoven than Puccini – the QV effortlessly sprints to over 200km/h, its trick Chassis Domain Control smoothly harnessing all the banshee forces. And this is what makes the new Giulia QV so exceptional.

Even at its performance limits all inputs of the car seem so uncomplicated. You do not have to fidget with numerous settings to get it to perform, and you don’t need to worry about what it might do next. It will tell you, instantly and timeously.

The carbon brakes are deadly, its handling and body control is exemplary, and even in Dynamic mode the ride isn’t harsh or unpleasant.
Alfa Romeo has put lots of time and effort into this car, and the result reflects this.

It’s a proper super sedan, one that can confidently take on the best from M, AMG and RS… and it’s a more than worthy successor to the original Alfa Romeo Giulia. But, at $1.4 million for the QV Launch Edition and about $1.6 million for the Race Edition, it isn’t cheap.

This is quite steep compared to similarly specced BMW 3-Series, Merc C-Class and Audi A4 models, and will surely test the strength of the long relationship with Alfa Romeo and Giulia – as seemingly only suitors of considerable means need apply…