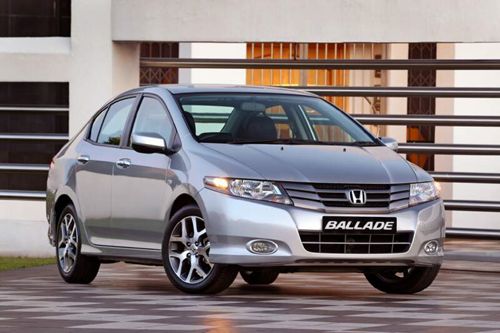 Many cars have left their mark on the South African market, some more than others, and few as successfully as the original Honda Ballade. The unique local name for what was essentially a Civic disappeared long before its antiquated, price-busting Citi and Tazz competitors did.

Price is king. Almost everyone in the motor retail industry will eventually admit this, which is why many manufacturers are teaching old dogs new tricks and new dogs cheap tricks. What the buying public wants, nay, demands is a good little car that’s affordable, safe and reliable.

Honda South Africa hasn’t braved the lower-100’s entry-level market but instead focussed their attention on the small family sedan hunting grounds. With a basic four-door model called “City” available internationally in 25 other countries, Honda S.A. rushed the newbie to our shores, ripped off its badges and stuck on a self-proclaimed legend: Ballade.

The Japanese giant sold 5 variations of the previous Ballade in South Africa; there were 45 different models and 171 000 units sold over a total of 19 years. The screamer VTEC models only made up about 8% of sales, which proved that the Ballade was interpreted as a more affordable version of the accomplished Civic.

My first exposure to a Ballade was a 1993 Ballade 160E belonging to my best friend’s Mom. The infant VTEC Honda put up with two Matric dudes testing the 7,500rpm limiter repeatedly, abusing its planted handling and excellent sound system. Despite being severely tortured, it never skipped a beat. Not once.

This highlights why Honda S.A. officials happily called the Ballade a Kanniedood – and also proved why it was such a hit with the more senior members of our community. Have a look around you in traffic and it won’t be long until you spot a Ballade. Talk to its owner and you may be assaulted with gushing pride.

The new Ballade slash City isn’t quite as basic as its predecessors but offers a similar value-for-money proposition. The Jazz’ 1.5 VTEC engine is offered with five-speed manual or automatic gearbox, Comfort or Elegance trim, built on Honda’s compact car platform which it shares with the hatchback Civic and CRZ.

Honda S.A. has no plans to bring in smaller engines as they argue that a weaker power-plant will struggle to propel a family plus luggage adequately. No Diesels or screamer VTEC’s are on the cards, either. On our test-route we did discover that rev-addicts and/or fuel savers won’t be disappointed though…

The Ballade offers decent space and modern features inside, its material quality and finish is decent, and that eager engine offers pleasing performance with a sporty scream into the redline, if you wish. It also provides ISOFIX mountings, a full size spare wheel, 506L of boot space and folding rear seats.

Personally I quite liked the car’s Insight-ish nose, its comfy interior, light and responsive power steering and pedals, crisp gear change, seven cup-holders and the striking 16-inch wheels. I’m not too sure about its bland ‘n bulky backside though, but this ensures good aerodynamics and a voluminous boot.

All Ballades are built in Honda’s environmentally-friendly Thailand factory; the 3rd largest Honda factory also produces Accord, Civic and CRV, predominantly for the Asian and Australian market. The City/Ballade has also racked up various car-of-the-year and quality awards in India, Indonesia and Malaysia.

Each Ballade is sold with a three-year 100,000km warranty and four-year 60 000km service plan. Prices are N$184,900 for a Comfort Manual and N$193 900 for an Elegance Manual model. Add N$12,000 for an automatic gearbox and expect this South African favourite to return to dealer floors from 25 February onwards.