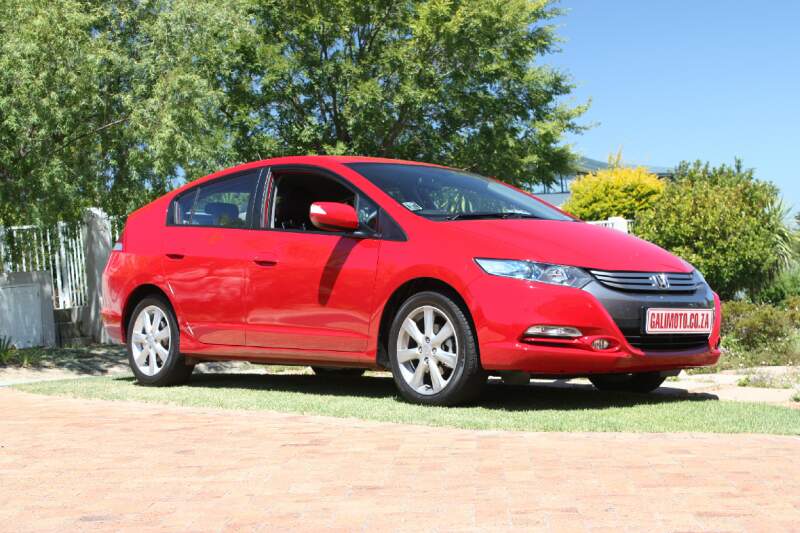 First impressions are vital but can often be misleading. Actually I was supposed to tell you about the new Honda CRZ Hybrid today but a slight mishap landed me in the driver’s seat of the equally hybrid Honda Insight. And my initial impressions were rather mixed…

Upon first inspection it appears that Honda took a brief look at the Toyota Prius and simply built their own version, but it turns out that the unattractive wedge shape with its raised rear quarters is the most aerodynamic (read: efficient) shape for a motor vehicle.

The Insight has funky blue headlight glass, a sparkly grey grill, recessed fog lamps and thin front indicators but even the bright red paint of my demo couldn’t brighten up the rest of the Honda. The proportions seem wrong and no amount of LED taillights and Hybrid badges will cure that.

Its interior is a little more conventional and practical, although the sloping rear roof seriously diminishes head-room at the back. Smaller and front passengers won’t complain about lacking space or comfort though, you get a 400L boot and the Insight is packed with loads of features.

Unlike the Prius, the Insight doesn’t switch between its petrol or electric power sources and cannot run on electricity alone. The fuel use and emissions are attacked by a miserly 1.3-litre petrol engine which gets a helping hand from a small electric motor.

Combined power output is 73kW (99hp) and 167Nm of torque, only 108g (average) of CO2 per km and a combined fuel consumption of 4.6L/100km from its 40L tank. Compared to Toyota, Honda has packaged its hybrid trickery a little better and even encourages you to play entertaining games.

The Insight’s instrument panel is funky and colourful with a charge ‘n assist needle – charging the battery as it recuperates energy from braking and deceleration, assisting with said battery power as the vehicle accelerates or requires a little more vooma.

If this doesn’t keep you occupied, the reflected digital speedo in its own space-age pod will change colour according to your driving; green for good, turquoise for so-so and blue when you put foot. The chameleon display is joined by a comprehensive trip-computer rising from the centre of the rev counter.

Next to mileage, seatbelts and other boring stuff you will find an instant consumption gauge, a three-memory consumption read-out, a hybrid cycle screen and a row of five little plants. Yes, plants. They grow or drop their leaves and stems depending on how economically you’re driving.

Yes, yes, I know. It’s ridiculous. But you know what? I wasn’t the only one who disliked the Insight’s shape, grew fond of its interior and loved its computerised consumption games. During my week of testing, three friends started telephone conversations with “how many plante have you got now?”

The answer is four-point-five. My Insight alleges to have used 6.6L/100km from new and I kept an eye on the three-memory consumption averages. My highest was just under ten and the lowest was about three. THREE. That’s amazing.

An ECON mode assists your miserly efforts even more and the Insight drives like any other car. You’ll have to get used to the unnerving sensation of a dead engine at the traffic light anyway as Start/Stop technology is slowly marching into most “normal” combustion engines.

I tried to fool the system but the engine is alive and ready by the time your foot’s off the brake. The 1.3 motor and CVT gearbox with paddle shifts are as sluggish and noisy as can be expected but the upside of slightly lethargic performance (12 seconds to 100km/h) is exceptionally good fuel consumption.

Other than that the Insight has fantastic brakes, predictable and neutral road-holding with tons of electronic nannies, a slightly firm ride, good headlights, a decent audio system and front seats with exaggerated lower back support.

As an avid petrol-head I don’t believe that hybrids are the solution to our supposed problems, but they are a step in the right direction. The Honda Insight is less of a hybrid than I thought it would be and even makes efficient driving a little entertaining and fun.