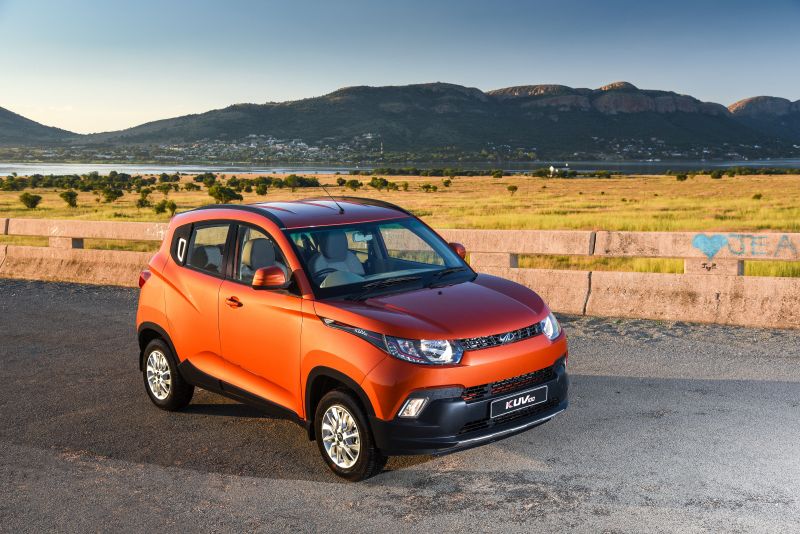 Mahindra? Ah, yes, it’s that Indian company building sturdy pickup trucks, hardy sport utilities and kind-of outmoded 4×4 types, right? Right. But not for much longer, as the Indian giant (currently the third largest manufacturer in India by sales volume) is readying itself for a model onslaught – locally, as well as internationally.

The offensive includes a bouquet of advanced derivatives, including the insanely competitive small hatch and SUV market. Other innovations include the introduction of the carmaker’s first in-house developed petrol engine, and a new, advanced automatic gearbox – all aimed at expanding the manufacturer’s footprint and to widen its appeal in other markets.

This reintroduction of Mahindra has been highlighted by the recent launch of its minute REVA e20 electric car in Britain, as well as the unveiling of its NuvoSport SUV (actually just a revamped Quanto) in its home market.

South Africa’s importance cannot be underestimated. Mahindra has officially been in South Africa for 12 years (although some of its jeeptype
products are running around here, imported by an independent distributor since about 1996) and Mahindra currently retails some 4,000 vehicles annually.

According to the executive director of Mahindra & Mahindra, Dr Pawan Goenka, this gives them a 1% share of the local passenger car market. “This is not where we want to be,” he said. “With our renewed line-up and new model offerings we hope to increase our share to about 3%.”

He indicated that local assembly could be on the cards in the longer term if sales increased markedly – underlining the significance of our
market to Mahindra. It was also evident during a visit to the manufacturer’s state of the art facilities in India, as we were the first overseas journalists to sample the new KUV100 hatch/SUV and high-power version of the TUV300.

Our tour in India included a visit to the research and development centre in Chengalpattu close to Chennai, where we were shown the over-hauled ladder-frame chassis for the Scorpio. We also witnessed how the new KUV100 and the XUV500 are built at the world-class Chakan plant in Kurali near Pune, and we also experienced its 4×4 development track in Igatpur.

Dr Goenka also added that new model offerings such as the new KUV100, TUV300 and NuvoSport contributed strongly to Mahindra’s growth of 6% in the Indian market in the current financial year to date. The range in South Africa will be boosted with the introduction of the KUV100, followed by TUV300, as well as updates for XUV500 and Scorpio, and a relaunch of the Thar.

The “100″ and “300″ is pronounced “double oh” in India (as in the sixteen-double-oh-sport; for those who still remember the Escort of old…), ostensibly like the “o” and “oo” in Mahindra’s naming protocol (Bolero, Scorpio, Genio, etc.) except for the Thar and NuvoSport… The KUV100 (it purportedly stands for Kool Utility Vehicle) represents an interesting concept in the small hatch / mini-SUV market.

Compliant with Indian regulations for small vehicles (it has to be less than 4 metres long and have a sub-1.5-litre engine) the KUV stands taller than its competitors, and is thus roomier. According to market research done by Mahindra this is exactly what buyers want; a hatch with the looks and space of a small SUV – hence the KUV’s unusual design lines.

The result is somewhat ambiguous, though; its aggressive grille and nose giving it significant road presence, but its tall greenhouse making it appear unbalanced – further emphasised by its small wheels and tyres.

If its looks will be accepted locally, remains to be seen, but the KUV is a pioneer in a new sub-segment, as shown by upcoming competitor models such as Datsun’s Redi-GO and the Fiat Mobi. The new KUV100 is also the first Mahindra with a petrol engine developed in-house, and only the second (besides XUV500) with unibody construction.

Producing a healthy maximum of 61kW at 5,500rpm and 115Nm of torque around 3,600rpm, the small “mFalcon” G80 1.2-litre threecylinder turbo engine compares well with competitor offerings. But its performance, while quite lively and willing, is bested by its diesel-powered “mFalcon” D75 1.2-litre three-cylinder stablemate.

While 57.4kW at 3,750rpm doesn’t sound like much, its 190Nm from 1,750rpm makes it the unit of choice to propel the hefty KUV100 through hectic Indian traffic. Locally the hatchback/SUV will be available with three trim levels, dual airbags, ABS, EBD as standard from the entry-level K4+ upwards.

The neat layout of its instrument panel and simple, striking design of the centre console was particularly noticeable in the top model K8, and more impressive, when compared to the earlier Mahindra’s, was the quality of the interior trim and materials.

Its high roofline invoked a sense of spaciousness and its 243L luggage capacity, expandable to a generous 473L with the rear seat folded down, was more than ample. The extra foldable seat up front (in essence making it a 6-seater) was in the way when you wanted to change gears, but luckily this isn’t specified for SA.

The interesting Indian newcomer competes against the likes of the Maruti-Suzuki Baleno, Hyundai Grand i10, Renault Kwid and Ford Figo in India, while locally it will be aimed at the Renault Captur, Suzuki Swift and Toyota Etios. The design of the bigger seven-seater TUV300 was, according to Mahindra, inspired by a battle tank.

In contrast to the KUV100 its lines are very angular. In real life the tall vehicle is much bigger than expected – with 384L of luggage space that can be expanded to 720L by folding away the small inward-facing rear seats. In India it is available with a 59kW or 61.5kW derivative of the 1.5- litre “mHawk” turbodiesel, but the SA model will be powered by the new, more powerful 75kW version, with 230Nm of torque.

The TUV300, like the new KUV100, is available in T4+, T6+ or T8 trim levels, and will initially have the five-speed manual transmission, but an automatic derivative could follow later.

This vehicle’s build quality and cabin appointments, like those in its KUV100 counterpart, are of surprisingly good quality, and for a tall vehicle its handling is certainly acceptable. While its smallish engine pulls well at low revolutions, it soon becomes breathless, and it may well struggle to keep the quite heavy SUV (with a weight of 2,225kg) up to highway speeds in local conditions.

During our visit we also sampled the new XUV500 auto, as well as the face-lifted Scorpio, now with new front end, grille and revised  ladderframe chassis which somewhat improves ride quality. However, the six-speed Aisin auto transmission in the XUV is really good; seamless and quick, and should add to the medium-sized SUV’s appeal when it arrives here in September.

While the Thar was discontinued from the local line-up a couple of years ago, Mahindra now plans to reintroduce the rugged 4×4 to the local market later this year. Based on the Jeep CJ9 the latest Thar features revised interior trim (including air-conditioning) and a new rear diff-lock, and proved itself a very capable off-roader in our tests at Mahindra’s Igatpur 4×4-track.