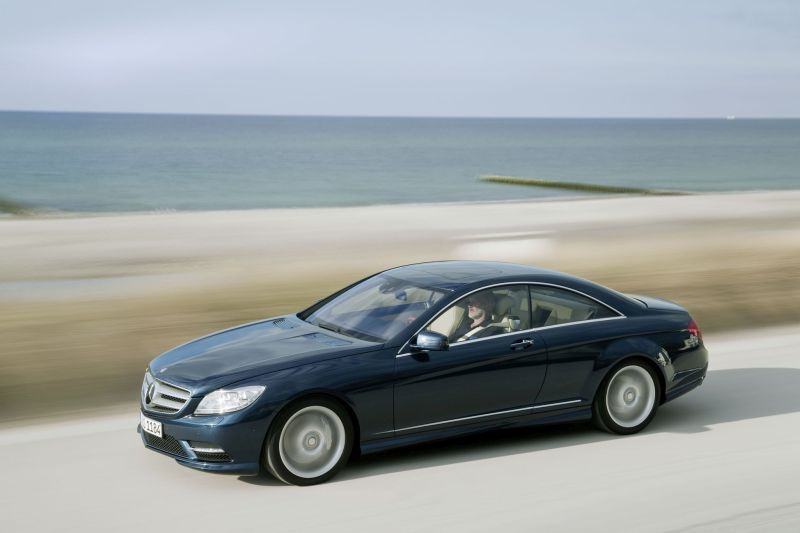 Business tycoons, rock stars and lottery winners may want to pay attention today. Mercedes-Benz has just freshened up their flagship CL coupés and flew us to Gauteng for the launch which coincided with the brand’s (and indeed, the motor car’s) 125th anniversary.

After extensive exposure to a Vito van, we were confronted by no less than six see-el Mercs. Considering the cost, rarity and imposing size of these cars, it was a surreal experience to see an entire six-pack worth well over ten million Rand.

The biggest changes are to be found under its grand metal skin, predominantly in the engine bay. The CL600 and CL65 AMG feature negligible tweaks to the 5.5 and 6.0 litre V12 engines, while the CL500 and CL63 AMG now pack a brand-new power plant.

A 4.7 litre twin-turbocharged V8 engine replaces the unassisted 5.5 litre V8 of 500 models and the insanely large but rev-happy 6.2 litre AMG V8 makes way for a 5.5 litre twin-turbo unit. The use of high-pressure Piezo direct injection aids all models to increase muscle but decrease thirst.

Power for the CL500 rises from 285kW to 320kW and a claimed average consumption of 9.8L/100km is an astonishing 23% improvement over the outgoing model. Merc’s Blue Efficiency technology also cuts average CO2 output from 288g to 224g per km.

The AMG-tuned 5.5 engine kicks out 400kW, 14kW more than its predecessor. Torque rises to 800Nm and petrol-heads are encourage to order the AMG Performance Package which increases power outputs to 420kW and 900Nm; and raises the limited top-speed to 300km/h.

Both vehicles feature variants of the 7-speed automatic gearbox, the AMG box receiving a few doses of haste and vigour with MCT double-clutch wizardry. V12 buyers will have to make do with the old 5-speed auto (ag shame) as both 12-cylinder engines would happily turn the 7-speed unit into very expensive shrapnel.

Aside from the odd matt-silver paint job, you won’t need many of the extras though. Forget power steering and electric seats. Each CL is loaded with space-age, sci-fi, what’s-that technology which will only reach mere mortal automobiles in about 10 years. Hopefully.

I sampled the CL500 first and even the ‘baby’ CL is an incredibly impressive, luxurious, sophisticated piece of kit. It glides over Centurion tarmac with grace and precision, is utterly comfortable and easy to drive with its light controls and rewards traffic jams with an endless amount of features.

Gauteng’s thinner air and brewing storm climate did expose a turbo-gap in the growling V8’s armour, something the bi-turbo V12 CL600 had slightly less of. The difference in performance is much of a muchness, the fresh V8 burbling slightly behind the gruff V12 melody.

After lunch I fought my way into the CL65 AMG, a machine almost capable of time travel. It also hesitated slightly when floored but once fully inhaled, even the addictive hammering of a CL63 gradually fades into the rear-view mirror.

Every CL possesses unbelievable performance and the CL65 AMG is the ultimate evil. More than the others, it can barely contain its power in first and second gear with flashing lights and a twitchy backside. Third gear and upwards finally unleashes its atomic power, as do any overtaking attempts.

Great, so the CL’s are leaner and meaner than before. Unbelievably, they have more toys than my niece and cost, as Afrikaaners put it so aptly, ‘n huis se prys. They’re probably more luxurious and excessive than any huis you care to mention… but you can’t drive a huis.