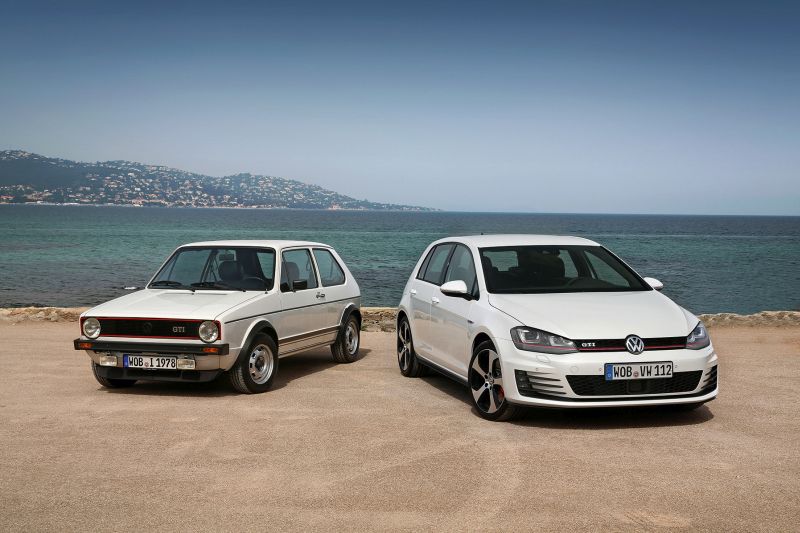 Volkswagen just announced the last Golf 7 GTi model, so we take a look at a car closing in on 45 years of existence. To this day, VW’s front-wheel driven high-performance hatch remains a true car for the people. So much so, that 33% of all new Golf owners in South Africa opt for a GTi badge on theirs. That ranks Southern Africa as one of the top 10 countries, when it comes to GTi ownership, worldwide. N.B.: These are local / ZA specs while photos are of international models. Other high-performance Golfs like VR6 or Golf R have been excluded from this list.

Here’s where it all started, with a very simple recipe: small car, peppy engine.

Launched in 1974 (1978 in South Africa), the original Golf Mk1 was seen as the successor of the Beetle. Filling the shoes of a (by then) 40-year old winning recipe, must have been a tall order. Yet, the Golf was an immediate success in both Europe and South Africa as it sold more than 20,000 units in a year ( in South Africa alone).

Lagging somewhat behind Europe markets, South Africa saw the launch of its first Golf GTi in 1982. Powered by a 1.6 inline 4-cylinder engine, the Mk1 GTi was capable of producing 81kW (at 6,100rpm) and 140 Nm (at 5,000rpm). This front wheel driven hatchback could hit 182km/h, whilst taking only 8.8 seconds to reach the 100km/h mark from a standstill.

To this day, the MK1 GTi remains one of the most successful hot hatches of its time.

Bigger and better than Mk1, the “Jumbo Golf” GTi came with 8V and 16V motors.

The new GTi (1.8 litre) featured a brand new chassis design for its larger design. This also meant that the MkII had more space. Even more importantly, the Golf paved the way for new technologies such as ABS and power-steering to be introduced.

The GTi MkII was more spacious, powerful and family friendly.

The difficult third album, and one most (local) fans want to forget. Fun to drive but pap.

The third-generation Golf GTi struggled to generate the same hype as its predecessors as the (now much larger) chassis carried a 2-litre engine. Whilst capable of 110kW (at 6,000rpm) and 180Nm (at 4,800rpm), the newcomer could only reach 100km/h in a time of 9.32 seconds. Yet, Volkswagen managed to improve the top speed to 215km/h.

Besides the power increase, it also featured a stiffer and sportier suspension as well as more direct steering. At the time, this was said to be the biggest revelation since the first Golf came to be, nearly 20 years before.

One of the biggest changes in GTi history, this was the first turbocharged model.

The GTi name was back in the game and stronger than ever.

Another big step up for GTi with a new engine and lots of modern technology.

Not only was it far superior to its predecessors in terms of sportiness, but also introduced new features such as 8 airbags, Bi-xenon headlamps and stiffer suspension.

As before, the Golf 5 expanded the brand even further as more customers realised the potential of the GTi as being a “best of both worlds” option.

Not wanting to mess with a winning recipe, Mk6 was a soft evolution from Mk5.

More so, it was also introduced with ABS, ASR and ESP. Customers also had the choice between a 6-speed manual or DSG gearbox. Yet, before the launch of the new GTi in 2014, Volkswagen had two more surprises up its sleeve as it introduced the iconic 35 Edition in 2012 as well as the Cabriolet GTi in 2013.

The 35 edition saw an output of 173kW and 300Nm, pushing the car to 100km/h in only 6.6 seconds. Available with the usual 6-speed manual or DSG options, the 35 also featured a new electronic differential.

In 2013, the GTi brand launched its first local cabriolet. Not as powerful as the 35, the Cabriolet saw the normal 155kW and 280Nm combination. Although it carried the same amount of power as the Mk6, it had a slower top speed (235km/h) as well as a slower 0-100km/h time of 7.3 seconds.

However, new technology such as the Dynamic Chassis Control was introduced as a standard option. This meant that the GTi could now be set up in “Comfort”, “Normal” and “Sport”. It also featured a new front electronic diff.

However, the itch did not stop here and Volkswagen updated the GTi even more. Introducing the GTi Clubsport in 2016, the GTi brand was now capable of 195kW and 350Nm. An “Overboost” function allowed the power to be increased to 213kW and 380N for a mere 10 seconds.

With this introduction, Volkswagen reached the sub 6-seconds time for the 0-100km/h (thanks to launch control) as well as a top speed of 249km/h.

Less than 7 months later, an even more powerful Clubsport S introduced 228kW and 380Nm as a two-door GTi version. 400 of these Nürburgring front-wheel drive record setters went on sale worldwide, of which 47 found very lucky owners in South Africa.

Shortly hereafter, the Golf GTi brand traded petrol for diesel, when it introduced the GTD in 2017. The 2-litre TDi produced 130kW as well as 350Nm.

On its launch in 2017, the GTD felt like a well-designed top-tier diesel entry into the market, however did not rival the public appeal of the petrol GTi. Soon afterwards, for many GTi owners and afficionados, the move from a 6-speed manual- to a 7-speed DSG gearbox took away the essence of sportiness.

Now, as a last hoorah for the Golf 7 range, Volkswagen sent around 300 Golf GTi TCR units to the tip of Africa. It will once again carry the front-wheel drive philosophy, this time with 213kW and 380Nm. Capable of a 0-100 time of 0.8 seconds slower than the new Golf R, the TCR might truly be the fastest GTi yet. Even faster than the mental Clubsport S.

Volkswagen has come a far way since the introduction of the Golf brand in 1974, at which it stage it was a pretty bold move to make (following the success of the Beetle).

Yet, the Golf GTi brand carries the true heritage and ideology of the Volkswagen brand. It has been created for “the people” by “the people”.