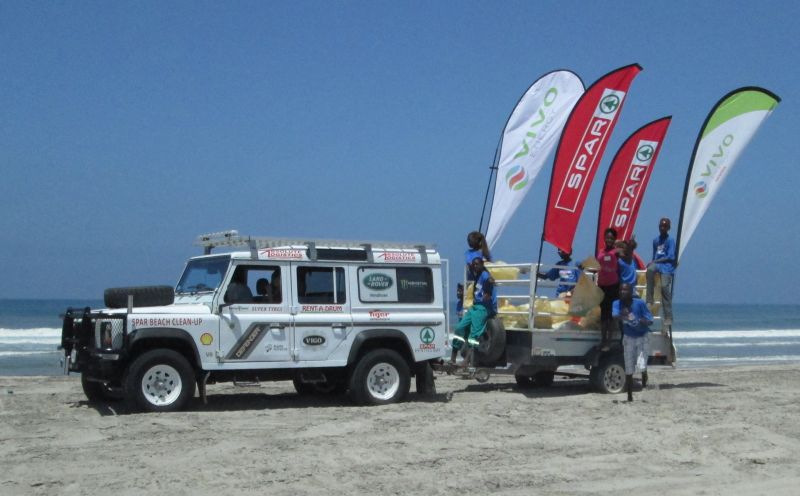 Namibia is undoubtedly one of the most beautiful countries on the planet, its contrasting countryside attracting local and international tourists in their thousands. Unfortunately, some foul elements seem to think that the world is their garbage can and in Namibia it’s no more evident than at the beautiful coastline. One local hero Johan Mostert had enough of this…

How did this start?

I go to Henties Bay at least twice a month and I was sitting on the beach with a friend of mine; near “Grys Duintjie”.We had a few beers and noticed all the paper and trash flying around on the beach. That’s when I said “Listen, I’m gonna start cleaning the beach!”

Upon my return to Windhoek I spoke to a few suppliers and every single on was immediately on board, also because I don’t charge a lot of money for this.

The first year was 2013, so this next one will be my third year.

Where do you clean?

We’re going to start again this year around the 15th of December, just before the main rush of holiday makers. For the first three days we’ll do Henties Bay town itself, which also includes Omdel.

Then we focus on the beach front, which will be the “North Dune”, “South Dune” and the central part. A few days after that, we start at Mile 108 and work our way down, from the Ugab River mouth till Wlotzka’s Baken – which is about 140km of beach. We’d also like to include Langstrand this year.

What happens to the trash?

We regularly meet up with the guys from the municipality and they’re very willing to help! The trash is collected in sponsored bags and delivered to collection points or placed near existing rubbish bins.

How much do you pick up?

Is it only over Christmas?

No, no! I often call up my regulars at short notice and clean the beach during a quick weekend visit.

What trash do you find?

In the streets we find cans, plastic bags, bottles and other rubbish. After New Year’s parties we find anything from cameras and cell phones to braai grids and booze. It’s important to note that about half the stuff we find on the beach appears to have been washed up from the sea – foreign languages on the packaging give it away…

So Henties is the cleanest town over Christmas?

Hahaha, yes it is! We also help the West Coast Safety Initiative by distributing their pamphlets.

Who’s in your team?

I’ve got a trusted group of people I like to use. I also contacted the secondary school in Henties Bay and asked for 15 to 20 kids to help us out – especially the ones who don’t go away on holiday. Instead of being bored, they help us clean the seaside and we pay them per bag of trash. The kids are excluded from our New Year’s clean-up because we find alcohol, knives and other adult things!

My parents also help out as they think it’s a very noble cause. My Dad “Oupa” brings his Toyota Hilux to join my fleet of Defenders and off-road trailers.

I love Defender V8’s and the one you see above (in the main photo) was the first year we did this beach clean-up. I’ve since sold the car but bought two more, one of which has permanent stickers on it. Every sponsor is so committed that it makes no sense to take them off!

I’ve also built a brand-new trailer for this year, previously we used a sponsor’s trailer but there were a few things I wanted to improve. My new trailer has the correct track for driving on the beach, as well as steps for my guys to stand on.

Yes, companies buy space on my vehicles or trailers and the money covers our fuel, wages, etc. Other sponsors provide us with meals, sweets and refreshments for the breaks we take between cleaning. We’re not after profit, nor do I have any more advertising space to sell at this time. One Landy is entirely sponsored by Nedbank’s Go Green Fund. It’s a great position to be in and I’m very grateful for my sponsors’ loyalty and commitment.

What do you enjoy most?

Meeting new people all the time, helping the community out and keeping our country clean. I also get to enjoy my cars!