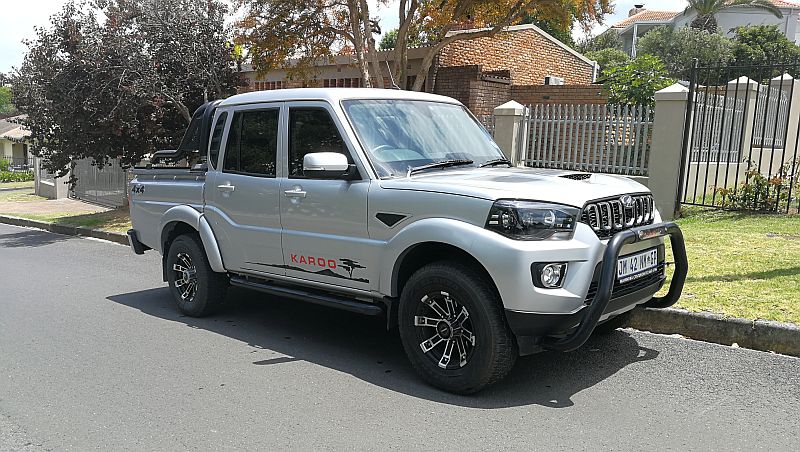 I’m sure you’ve heard of the adage that one shouldn’t criticise a gift. Well, I shall try to be as diplomatic as possible while still giving you an objective opinion of this double-cab bakkie which Mahindra graciously lent us over the Festive Season.

That’s right, I didn’t ask Aston Martin or Bugatti for a holiday car, I shot a mail to Mahindra South Africa. There are a few glaringly obvious reasons for this, chief among which is that they were the most likely to answer out of that trio. Also, I didn’t want to scratch a DBX or try to fit a baby seat in a Chiron.

Jokes aside, the collective team at NamWheels was fairly pleased with our gifted horse because we’ve all reviewed some sort of Mahindra PikUp before – be it S10 or S11 Automatic – and most of us were pleasantly surprised. Sure, there are some niggles to report on but everyone agrees that they’re negligible because of the excellent prices.

To give you a quick run-down of the range, the Indian manufacturer sells a large variety of these workhorses in southern Africa. Aptly named “Pik Up”, the range starts with single cabs in rear-wheel-drive and base trim, going over 4WD, better spec levels, chassis cab, drop-side bed, up to double cabs with various spec, 4WD or transmission options.

All of them use the same “mHawk 140” 2.2 CRDe engine: a 2179cc in-line four-cylinder long stroke turbo-diesel which can deliver up to 103kW (140hp) or 320Nm. Although it uses a common rail fuel system, the unit only conforms to Euro2 emissions standards. S6 and S10 models use a six-speed manual gearbox while S11 derivatives get a six-shot automatic.

Most versions of the PikUp are available with two (rear) driven wheels or a switchable 4WD system with low range and mechanical rear differential lock. This silver Pik Up S11 4×4 Karoo is the very top dog in its range, its R429,999 asking price being just about double that of the cheapest single-cab model.

I’m going to assault you with a quick hit-list of this vehicle’s features because they’re rather important at this (price) point. Remote central locking, climate control, cruise control, retractable front seat armrests, headlight delay and LED daytime light strip, as well as a touch-screen media system with Bluetooth, very detailed satnav and a rear-view camera.

Ignoring its inferior performance for now, obtaining the same spec level in a competing brand will cost you a good few pennies more. Ford asks an extra R180,000 while Toyota will need R220,000 more for an equivalent 4×4 Automatic double cab. Their top models with the newest engines add another 100k to those prices…

What does Karoo mean?

Well, besides the extremely arid southern African region it’s named after, this special-edition model comes with custom graphics on the bottom of its doors as well as beautifully-machined plaques for its front nudge bar and the load bed’s cosmetic roll over hoops. Our press vehicle’s bak also had a handy roller security top.

This device proved to be reasonably water resistant but not dust proof. Please pack accordingly! So far you can probably tell that our freebie horse was making a good impression. But before you accuse NamWheels of being biased towards generous manufacturers, here are some of our more negative notes.

The engine and auto-box combination are prone to a random hick-up which sounds like a high-performance turbo-petrol’s waste-gate flutter. “Tjoo-tjoo-tjoo” will sound from beneath the bonnet, most notably during gear changes at low speeds, mostly when the motor is still cold and receiving about ¼ throttle uphill, i.e. with a light load.

Sometimes this phenomenon briefly occurred at pull-away or we’d get a continuous fluttering while trying to gently accelerate up a cold morning hillside. However, it never happened at anything over half-throttle application. Thus it’s not a safety risk / deal-breaker in our opinion.

Two glaring examples of this are as follows. Firstly, the PikUp’s trip computer only has two mileage counters, its consumption and range display is part of the media screen. Next would be the wiper controls which operate via a normal stalk but lack an auto/intermittent function; that is activated by a button under the climate control.

Again, these may be puzzling but they’re not epic fails in our opinion.

Typing of opinions, most observers agreed that the PikUp is a weird-looking vehicle. Ugly or awful? Perhaps from an odd angle at the back, because the rest is not too shabby. I have to admit that I was a bit self-conscious about driving a Mahindra in our Toyota-mad world, yet after a few weeks I was happy and proud to climb aboard.

In fact, over the last few festive seasons there haven’t been many press vehicles which I bonded with. They did what they had to and mostly blended into the crowd. But this Mahindra – believe it or not – did something to me which I would’ve never expected. Due to its price and underdog status, it really grew on me.

I’m not a bakkie person but I am a sucker for a bargain. Yes, of course this thing will lose more value than a Ford but remember that it’s starting from a lower base. And judging by the stories (or sightings) of older Mahindra bakkies in our area, I’d even venture so far as to say that it will last you for a long time.

And just before you accuse us of not testing this silver press vehicle properly, my wee family and I used it to travel from Somerset West to the Kruger Park and back again. We put almost 6,000km onto this machine and do you know how many breakdowns we had? None. Mechanical trouble? Nothing. Rattles? Nope, sorry.

The spongy cloth seats (with front armrests) fit this car’s upright stature and driving position, and although no bakkie can erase the harsh ride of its rear leaf springs, Mahindra has managed to at least engineer a decent layer of softness into this PikUp. There’s an overall smoothness to its chassis; which I didn’t expect.

Some interior surfaces seem a bit low-rent while others do the opposite: thin chrome borders around the front air vents or a modern plastic texture surrounding the gear selector. The contrasts keep coming in the shape of beautifully blue back-lit buttons (also on the steering wheel) but comparably garish instruments with a bright teal hue.

Last two, I promise! The media/nav screen dims too much when you switch on the headlights during the daytime; and the incredibly loud satnav voice is listed primarily by name, with language as a sub-heading. I explored the system’s many menus to remedy either of this but my endeavours proved fruitless.

Are you ready for some more good news? Performance may be meh with our best 0-100km/h time taking about 13.5 seconds but this bakkie’s torque and transmission do a great job of moving you along in daily traffic. High-speed overtaking needs a bit of patience, planning and the odd tip-shift manual intervention.

Trust me, we did quite a bit of that.

Mild off-roading was absolute child’s play for this big silver brute with commendable traction from these unknown semi-off-road tyres. One tester bemoaned the hard steering in 4-High mode while another only found out about the diff-lock when they heard the inside wheel/s scrubbing in a tight turn.

Mixed driving routines gave us an indicated average fuel consumption of about 10km/L from the generous 80L tank which only got better and better with considerate use. Cruising at a steady 120km/h gave us an impressive 12km/L (8.3L/100km) figure while dropping to 100km/h or less will add another kay.

I know it’s not an everyday scenario but perhaps it’ll interest the odd farmer or hyper-miler: coasting at 30 to 40km/h through the Kruger Park shoved us over 15km/L (6.7L/100km), eventually topping out at an astonishing 15.5km per litre of 50ppm diesel. That sort of consumption – and a range in excess of 1,200km – would make a small diesel hatchback proud!

To sum up, the Mahindra PikUp 2.2 CRDe D/C S11 Karoo 4×4 is a slightly weird-looking, jolly well-equipped, soft-riding, laid-back workhorse with an enticing price and excellent consumption. Included in the price is a 5-year/90,000km service plan and four-year 120,000km warranty with roadside assistance.

Not that you would ever need it, as far as I can tell.