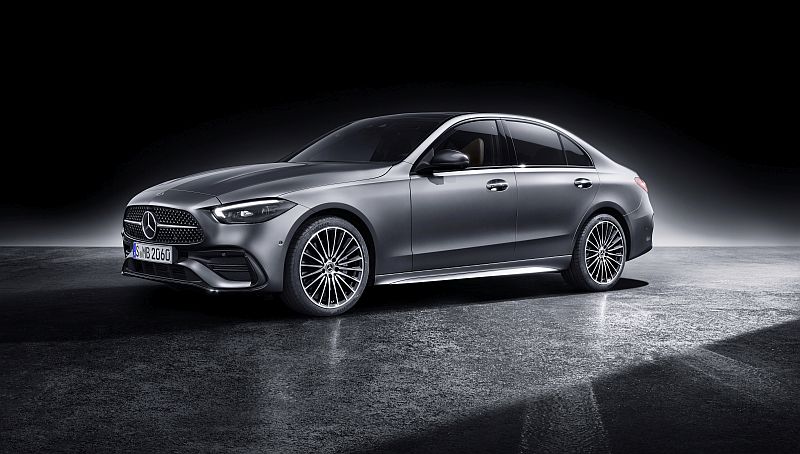 C stands for Compact Class, yet this evergreen Mercedes-Benz sales champion tends to follow in its bigger siblings’ footsteps by introducing many innovations to the compact executive sedan market. NamWheels brings you some highlights of the new W206 model while recapping those of its ancestors…

Even though this 206-chassis model is brand-spanking new, you will have seen most of its innovations in other Mercedes models; predominantly the new S-Class. These include digital (adaptive) headlights, enhanced safety and driver aids, plug-in hybrid technology, rear wheel steering and a supremely clever MBUX central command screen.

This large, upright, ipad-like touch-screen allows you to control just about every function of the vehicle. Mercedes also promises better voice recognition and a user interface that’s as clean and intuitive as they can make it. This device sits under three achingly stylish air vents and is slightly angled towards the driver to give the cabin a sporty feel.

Did you say sporty?

Yes. The online premiere of Mercedes-Benz’ new C-Class was subtitled “Enhance your comfort zone” by which they meant that comfort meets sportiness and luxury in their new baby. This painful split is achieved by using high-quality materials, innovative technology and passenger-focused comfort features.

Someone may have also mentioned stylish design, and while we at NamWheels cannot refute that claim, we’re once again disheartened that the C-Class borrows its looks from other Benz models. In this case, the E-Class and S-Class. If Mercedes was after brand identity and clean, sophisticated looks… they get 10 out of 10!

A large part of modern vehicle ownership is about interaction and user experience, which is why its makers have gifted the new W206 a large percentage of adaptive or upgradable technology. Chief among this is the audio / communication / navigation trio, but other user interfaces could also benefit from updates at a later stage.

It may not be relevant to Namibians (just yet…) but Mercedes-Benz has also improved the C-Class’ electric mobility potential with various plug-in hybrid models. These can offer up to 100km of pure electric range, depending on model and usage conditions. In other words, enough to easily cover most people’s daily work commute.

Every new C-Class comes standard with a high-voltage low-key hybrid system which helps the engine bridge power gaps but cannot be used to drive only on electricity. We did mention the rear steering feature, right? This decreases the car’s turning circle by about 40cm and gives it extra agility in tight corners or spirited driving.

A slightly more sobering fact is that every W206 will be powered by a four-cylinder engine. Wave good-bye to six- and eight-pot motors as increased efficiency sweeps across a range of turbo-petrol and turbo-diesel power plants; plus those mild hybrids. Every derivative is fitted with a nine-speed automatic transmission.

Our Mercedes-Benz representative in the land of the brave confirmed that order books are open and will start with the most popular sedan models: C180, C200, C220d and C300. Estates and plug-in hybrid availability is uncertain. Same goes for the upcoming crossover estate, but NamWheels is confident that we’ll eventually get most AMG versions in southern Africa.

Speaking of which, the legendary V8 muscle from previous ’63 AMG models will be replaced by a petrol-electric hybrid with half the cylinders; rumoured to push out around 500hp. That may rob the upcoming C63 AMG (expected in 2022) of its signature growl but helps the vehicle to improve efficiency, emissions and consumption averages.

For further information on the striking new C-Class, please view the Mercedes-Benz website or visit your nearest dealership.

The new, “kleiner Mercedes” started a sales counter that now stands at 10.5 million units. Although it wasn’t called a C-Class yet, this W201 is the genesis of the range. Often referred to as the “Baby Benz”, it started a tradition of nicking the bigger model’s innovations, mixed with superb quality at a decent price.

The W201 was built from 1982 to 1993 with a total of 1,874,668 units produced. This range was only ever built as a four-door sedan and due to its high import costs, only made it to southern Africa in the late eighties. The high-performance 16V (16-valve Cosworth) versions were also available at considerable cost!

The 1993 to 2000 model-year W202 was the first to be called a “C-Class”, a tradition started by its largest “S-Class” siblings. The letter “C” was followed by two or three numbers denoting the vehicle’s engine size. Another innovation was set trim levels (Classic, Elegance, Esprit or Sport) with escalating features and equipment.

Produced from 2000 to 2007, the W203 not just introduced a rounder and more elegant shape to the C-Class, but also added a two-door variant – the uniquely-shaped Sports Coupé – to the existing sedan and estate forms. Turbo-diesel and Kompressor (supercharged petrol) power was carried over from the W202 but further refined with more model choices.

The same goes for various driver aids and safety nets, as well as advancements in the infotainment field. The W203 range was the first C-Class to offer integrated navigation and telephony, albeit as a costly option for most models. Other novelties included window airbags, advanced trip computer and a multi-function steering wheel.

The 2007 to 2014 model year shape was called W204 as a four-door sedan, or S204 in estate form. Unlike the one before it, the C204 coupé was a beautiful two-door version of its donor. Power came from a vast range of atmospheric or forced-induction engines, from humble turbo-diesels to swivel-eyed 6.2L AMG rev monsters.

Ride comfort, passenger space, handling, average consumption and on-board toys were updated in equal measure to the many pre- or post-crash safety devices. Large radiator grill emblems in Avantgarde models, or optional AMG packages for other versions, signalled the more sporting intentions of this C-Class range.

With gentler exterior curves and a softer touch to its cabin design, the W205 ushered in a new era of sophistication and luxury. By this generation, all engines were turbo-charged for utmost efficiency while driver aids, transmissions, suspension, infotainment and communication technology was also further refined.

This was the first C-Class model range to feature an official Cabriolet (convertible) version. Power across the W205 range went from 85 to 375kW and, for the first time ever, buyers could opt for the Airmatic air suspension on some models. Other new-to-me items were LED headlights and pelvis / side airbags.