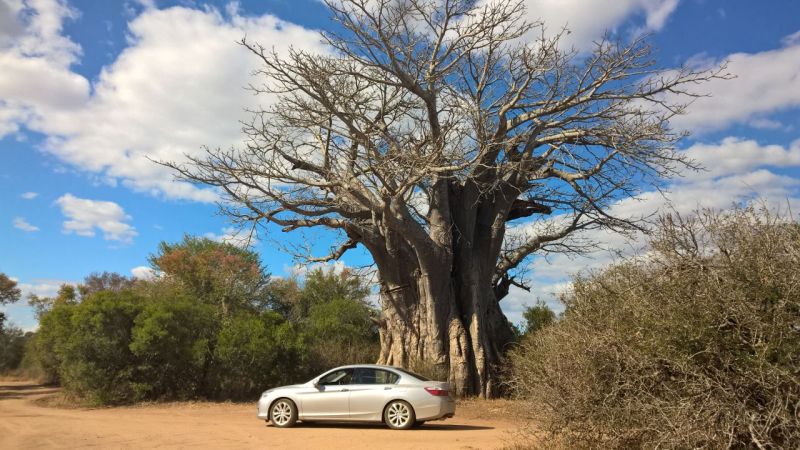 It’s a crisp and sunny winter morning in the Kruger Park and a number of cars have bunched up in one place to get a better look at some interesting fauna. Lions juggling a baby giraffe or something. More worryingly though, in the midst of the obligatory Fortuners and Defenders is a silver Honda Accord V6.

Given Kruger’s solid tarmac road network and decent dirt roads branching off it, the low-slung silver car is not the only luxury sedan in the park; nor is it the most expensive ride around. I won’t bore you with too many details of how we ended up with this car but I will use this unlikely position to elaborate on its qualities.

Starting our journey in Johannesburg, the call for a comfortable long-distance cruiser was stronger than that for a 4×4 which ultimately wouldn’t do much 4×4’ing. Throw in two tall occupants with the occasional tall guest and the new Accord with its extremely spacious cabin was perfect for the job.

Replacing its more refined European cousin, the car you’re reading about now is Honda’s American-spec Accord. It trumps the Euro version in space, comfort and engine choices because next to the 2-litre and 2.4-litre VTEC four cylinders, you can also choose this delicious 3.5-litre petrol V6.

Transversely mounted with a six-speed automatic gearbox, you may think that this motor is a foolish choice for crossing provinces because it would simply be too thirsty. However; Honda has tweaked the gearbox so that its top ratios are quite tall, dropping to 2,000rpm or less at most of the country’s speed limits.

The only time our V6 Accord helped itself to more than 10L/100km was on extremely slow game drives – with random stops and speeds of 20 to 30km/h – which easily resembles heavy commuter traffic. Pick up your pace and that figure quickly drops to eight or 7L/100km; at 50 or even 120km/h.

Its cruise control set to just over 120km/h on the highway, not only would the V6 dip into the high 6L/100km’s, it would also use its full LKAS system to keep a (three-stage) distance to any cars ahead of us. This standard feature also includes lane keeping assistance, blind spot monitoring and collision mitigation.

The car’s low ride height was a bit of a double-edged sword around Kruger, not allowing us to see as far as SUV’s but letting us to peek under thick bush and fields of Mopane trees. The two-stage heated front seats, ample storage space and cup holders all came in handy during our forays into the wilderness.

Its next distinct advantage was the sublimely comfortable ride, even with these snazzy-looking 18-inch wheels. The odd dirt road was a buttocks-clenching affair for fear of those low-profile tyres getting punctured but, except for a strange vibration at 1,800rpm, our Accord never put a wheel wrong.

Boot space is a generous 453L with a small peep/loading hole between the rear seats; very tall occupants nudged the limit of head room but had oodles of leg space. The rear windows can’t fully drop into the doors but offer a bit of privacy with manual sun shades; and an electric one for the rear windscreen.

Last but certainly not least, it’s worth noting that the Honda Accord 3.5 V6 is one of the last big sedans with a relatively big, naturally-aspirated engine. For those opposed to downsizing and modern turbo-charging, this car with its brawny and rev-happy motor will be a happy and safe haven.

It may be expensive but you’ll struggle to find similar power, space and refinement elsewhere. And as we already found out, it only starts guzzling at low speeds while easily matching rivals for efficiency when cruising at higher speeds. For anyone going on safari, I would suggest something a little higher though…