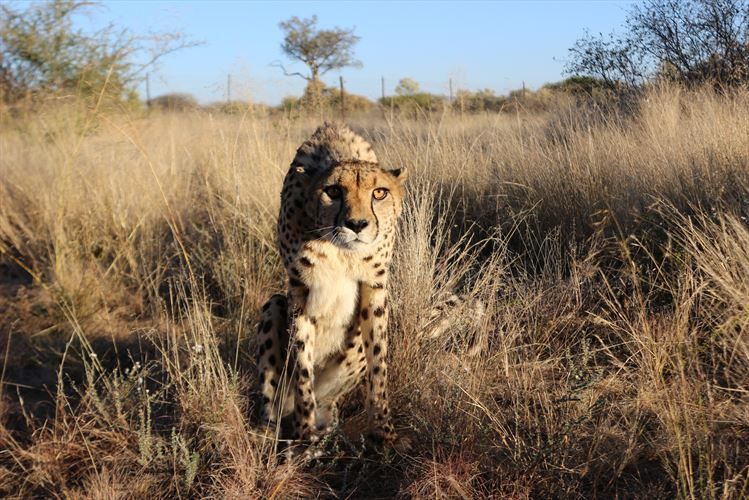 Still as determined as ever

From being a TV star to surrogate mom to many orphaned cheetah cubs that come to N/a’an ku sê Wildlife Sanctuary in Namibia, Lucky has lived quite the life. You might remember Luck as the three-legged cheetah which captured the hearts of South Africans in the Volkswagen Golf television commercial back in 2009.

The commercial told the story of Lucky and co-founder of N/a’an ku sê Wildlife Sanctuary Marlice van Vuuren who shared the touching story of Lucky whose hind leg was amputated due to irreparable damage caused by a gin trap she was caught in.

Despite this obstacle Lucky can be seen running and jumping in the commercial and at the end of the advert Lucky lets her hair loose at the back of the Volkswagen Golf with the windows down.

“Lucky doesn’t have cubs of her own as it is illegal to breed with large carnivores in captivity in Namibia, however during Lucky’s rehabilitation process, it became evident that she possessed intrinsic surrogate qualities – qualities that were put to good use. She became a surrogate mum to many cheetah cubs and young cheetahs that came to N/a’an ku sê as a result of various conflict situations,” said Marlice van Vuuren from N/a’an ku sê.

“Lucky brought a calming and nurturing presence and naturally looked after often traumatized cubs who had lost their mums in a variety of circumstances, human-carnivore conflict tending to be the main factor,” said Van Vuuren.

Besides her duties of surrogacy, Lucky is very adept at the “Cheetah Run”, a lure system used at N/a’an ku sê that stimulates cheetahs needing to remain in captivity to run as fast as possible.

“It is vital that all animals in captivity be given the most normal of lives possible, with their natural behaviours being encouraged, the lure system sees the cheetahs chasing a rag pulled at top speeds by a pulley system. Lucky loves the chase and runs so fast that the absence of her hind leg is not noticeable, and quite easily keeps up with the other able-bodied cheetahs,” said Marlice Van Vuuren proudly.

“The response and interest generated from 2009’s Volkswagen commercial was enormous. Her story spoke to many, as she is the iconic symbol of never giving up and making the most of life,” said Matt Gennrich, General Manager Communications: Volkswagen Group South Africa.

Lucky brought cheetahs and their plight to the attention of the public, and the Volkswagen commercial assisted Lucky in becoming an iconic ambassador cat, emphasizing the vulnerable status of her wild counterparts.

Lucky’s television debuts have not only been restricted to the Volkswagen Golf commercial, she makes an appearance in the third season of the popular conservation television series “Wild Jobs Namibia” (which airs on NBC) and “Groen: Namibië” which aired on DStv’s kykNET channel.

The core of N/a’an ku sê’s work is to return to the wild only those animals that are fully rehabilitated. Release was not possible in Lucky’s case, because her left hind leg had to be amputated due to irreparable damage.

“We had to make a difficult decision of whether to amputate or euthanize when we found Lucky, but the option of euthanasia fell away quickly because after all, would you end the life of a human who had lost a limb? So Lucky was given a second chance, and her name of “Lucky” reflects and embodies this,” concluded Van Vuuren.

Marlice van Vuuren, who has dedicated her life to conservation and also appears on the Volkswagen commercial with Lucky, founded N/a’an ku sê Lodge and Wildlife Sanctuary in 2006 with husband, Dr. Rudie van Vuuren.

The N/a’an ku sê Sanctuary is nestled deep in the bush, where orphaned animals are raised with dedication, their natural needs being carefully considered, tending away from the feeling of “captivity” – instead creating an environment where their instinctive behaviours are nurtured and encouraged.

N/a’an ku sê’s conflict mitigation research has prevented the persecution of countless felines and is further abetting the plight of Namibia’s threatened wildlife species. Visit www.naankuse.com for more on their conservation work.