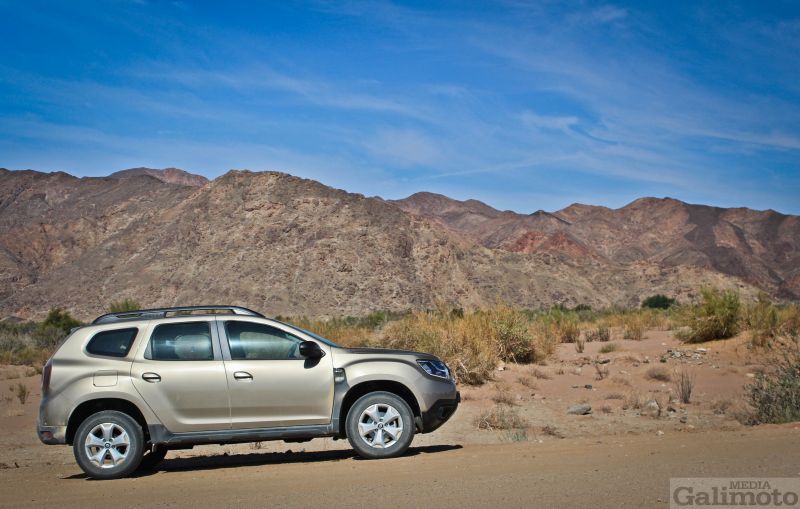 I’m writing a book. Like every author before me, I think the world is just waiting to hear my amusing short stories entitled “The Wrong Car”. These detail the many memorable trips I’ve made with cars which were way out of their comfort zone… which happily doesn’t apply to my recent excursion to southern Namibia with this 4WD Duster.

Although it took a while before I spotted a substantial amount of them, Namibia’s dirt roads are often frequented by the aptly-named Dacia/Renault SUV. This was proven at one of our last stops, near the Fish River Canyon, where Dusters outnumbered any other vehicle model in the parking lot.

To start at the beginning, Renault South Africa had kindly agreed to lend us a new Duster for our proposed photo safari encompassing Ai-Ais, Lüderitz and various Gondwana Canyon venues. As luck would have it, the freshly-launched 4WD model proved to be a perfect fit for our requirements.

Leaving Somerset West near Cape Town, via the N7 and Springbok in the Northern Cape, we crossed into the land of the brave at Vioolsdrif and Noordoewer on the Orange River. There we met up with family and friends to pursue a leisurely drive past Aussenkehr to the Ai-Ais rest camps.

Having already tested a 1.5 dCi Prestige (FWD) Duster earlier this year, we quickly become reacquainted with the willing little turbo-diesel engine and its short-ratio gearbox. With 80kW (109hp) and 260Nm, outright performance is below par… Renault claims 0-100km/h in 12.5 seconds but our best was 14.41 at sea level.

The shortage of oomph is thankfully balanced by excellent fuel consumption: Renault alleges 5.2L/100km for this model. Our overall average was 6.1L/100km from the 50L tank, equating to a range of just over 800km. At some stage we were heading for sub-six but that was undone by an urban average of around seven to eight.

This new 4WD model is fitted with a suspiciously familiar-looking rotary knob to select 2WD (for regular use), 4WD Auto where the car figures out when it needs the rear wheels to join in and 4WD Lock for all-wheel traction and a differential lock. Oh, and those six tightly-stacked gears cancel the need for a low-range transfer case.

In the real world that means you’ll have to short-shift first gear or, better still, start off in second around town. When maximum power was required I’d often rev a gear to around 4,000rpm and skip a cog; to prevent the inevitable and tedious change in between. Overtaking at highway speeds involves careful planning and plenty of patience.

Our sand beige test unit arrived with barely 4,000km on the clock and often returned a drive-train jolt between its lower gear ratios, although that phenomenon couldn’t be replicated at will and eased up as the mileage increased. Perhaps we got used to the Duster’s feather-light clutch pedal; and vice versa?

Other foibles include partially obscured controls of the outstanding climate control (Dynamique and Prestige model only) and a wonky fuel gauge. On a few occasions the digital dial below a comprehensive trip computer either wouldn’t reach full (when the tank was brimmed) or suddenly took a dive near its empty marking, taking the range indicator with it.

Faced with the prospect of bleeding a diesel system, I chickened out twice and resorted to a 10L jerry can of 50ppm which compensated for the sudden loss of range. And to finish off the not-so-chocolate side of our photographic expedition, the headlight intensity and range were not so great in the dusty parts of Nam.

Now for the good bits.

Thanks to its leisurely pace and miserly thirst, a carefully-driven 1.5 dCi Duster can pass an impressive number of filling stations. Next up is a wonderfully soft suspension (with good 215/65R16 Continental rubber fitted here) which irons out speed humps and dirt road corrugations with equal aplomb.

Naturally it also plays its well-sprung strengths in rougher off-road scenarios with a small side-effect being a lack of dynamic handling. It’s a simple little 4×4, buy something else for carving ‘round corners. Our single emergency stop from 100km/h was done in 3.17 seconds and 41.08 metres – just below average but satisfactory for a budget SUV.

Which brings me to my next positive point.

Although this second generation has grown up substantially, no thanks to help from sister company Nissan, the Duster still looks and feels like a cheeky 4×4. Not cheap but cheerful. Easy to use and unintimidating. Kinda like the Jimny or short-wheelbase Pajero, a playful little fellow who’s ready for your next dirty adventure.

I thoroughly enjoyed the creature comforts of our 4WD Dynamique model – remote central locking, cruise control, that aforementioned gem of a climate control and the intuitive media/USB/Bluetooth/navigation touch-screen. By comparison it feels simple and looks juvenile but by comparison, it works like a charm.

Audio quality isn’t superb, which can be expected at this price level, but the user interface and touch sensitivity are simple and super responsive. Top-drawer. Renault’s media control stalk (behind the steering wheel) needs a few rounds of practice, as does the buckshot layout of its speed limiter and cruise control buttons.

Again, they all work flawlessly.

Renault quotes 414L for luggage space which translated into one big gym bag, a folded-up baby camp cot, two hand-luggage cases, a plastic baby feeding station, two laptops and some smaller items. Under all of this we found a full-size spare wheel, warning triangle and molded Styrofoam oddment space. The jack is in a side pocket of the boot.

With 210mm of ground clearance, the Duster will react to heavy cross winds but never felt wayward. Steering feel is on the light side but it never seemed loose; even on gravel. Sure, the obligatory sinkplaat fest in fast corners can wake a very impressive ESP stability control system but other than that, progress is sure-footed.

Have I mentioned comfort yet? Oh, I did. It’s superb. No wonder rental fleets and tourists love these little 4×4’s. A temporary guest in our car immediately praised its ride while noting the generous window line (and unique D pillar shape) as our youngest intrepid traveler enjoyed the harsh but beautiful desert scenery from her elevated baby seat.

Apologies for the pink elephant sunshade in the accompanying photos but it was rather essential.

Another deeply impressive quality of the Duster was the aversion to its namesake – with two big rubber seals protecting each door, there is no unwanted dust intrusion to the spacious interior. Five adults will be a push but the average family with two kids should be fine, especially when using the roof racks or (optional) tow bar rated for 1,500kg.

And finally, as mentioned before and proven by the other Dusters hanging around the Fish River Canyon, this vehicle seemed at its best while traversing the dry southern African countryside. We did slightly north of 4,000km – about a quarter of that on gravel – where it felt like the car was at its happiest.

Or, to put it another way, it was in its comfort zone. Unlike the low-slung, high-riding, low-profile, high-priced monsters that are the main culprits of my current novel. I’m thinking of either adding a second part or working on the next book called “The right car” which should definitely be headlined by this new 4WD Duster…