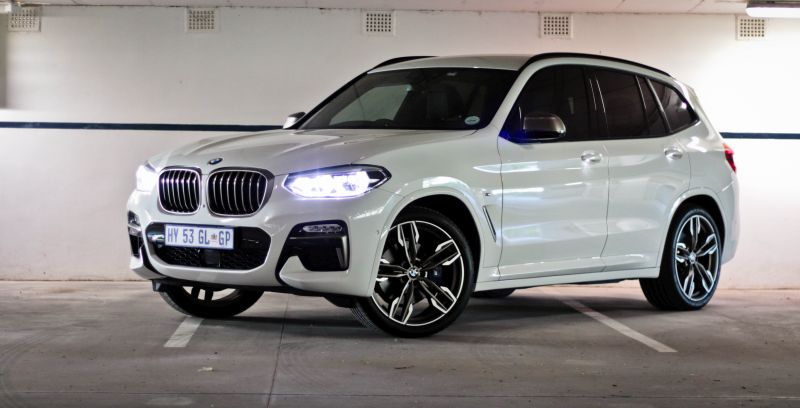 With this amount of power, these mountains of torque and such brutal acceleration, I could only do a sprint review on this beastly new BMW X3.

What you need to know: The BMW X3 isn’t a compact SUV anymore, oh no. That job goes to the X1 or X2, because this third-generation X3 is slightly larger than the first X5! Available with four or six-cylinder turbo petrol or diesel engines, our test car was the diesel king M40d. 2,993cc, straight-six turbo-diesel with 240kW and 680Nm.

To put that into perspective, most medium-sized buses would be happy with that amount of torque. The sports-car slaying power is also put to good use with the eight-speed automatic gearbox allowing launch control starts complete with second-gear wheel spin. Our best 0-100km/h run was 4.90 seconds; exactly what BMW claims.

More facts: At full tilt, we recorded a maximum acceleration G-force of 1.07G – which some cars don’t even achieve under emergency braking! Typing of which, the once-off hard stop from 100km/h took just 2.86 seconds and 36.23 metres at 1.13G. All top values.

Being a modern BMW, this new X3 spoilt us with every imaginable safety and comfort feature. Clever cruise control, big audio system, live navigation, concierge and SOS service, luxurious leather, brilliant headlights and a big boot (550 to 1,600litres) were just some of the highlights.

Watch out for: Obviously, the price of roughly one million. The (selectable) start-stop system is a tad eager, as is the radio which doesn’t switch off after you’ve exited the vehicle. Fuel consumption isn’t too bad, BMW claims 6.8L/100km from the 68L tank and we got a respectable 8.3. Go for the smaller xDrive20d if you’re after maximum range.

Where we went: Shopping malls, a crèche, some business parks and a fancy restaurant. Or, as we like to think, the natural stomping grounds of a BMW X3. This white press car with its dark brown leather interior slotted into our daily routines with aplomb and never put a wheel wrong. Quite the contrary, to be precise.

Why you’ll want one: The refined and sporty X3 base, plenty of room and luxurious trimmings, all the technological bells and whistles (watch out for optional extra pricing, though), decent fuel efficiency and a grumbling engine noise but most of all, that brutal performance.