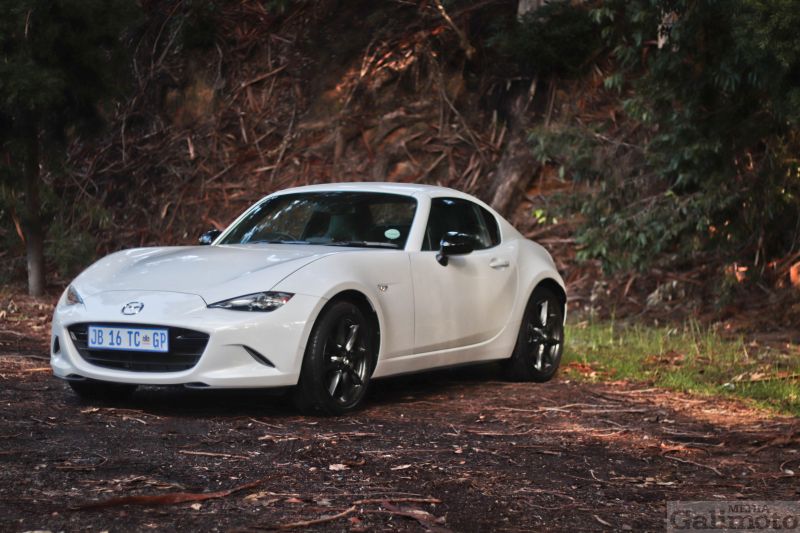 We simply can’t stop her! Our lady journalist grabs one key after the other and is eager to tell you about her experiences behind the wheel. This time it’s the turn of a sparkly white convertible Mazda.

I love the looks! I have to make jokes though about feeling as though I was climbing into a skateboard each time I folded my almost 1.8m frame into the driver’s seat and kept on having to go lower and lower and lower before eventually landing up just about on the floor. But hey, for an eye-catching roadster to drive, the loss of grace wasn’t a huge thing…. I can only recommend that ladies don’t compound the entry-exit issues by wearing heels…

Is it as agile as its reputation suggests?

This MX5 is So. Much. Fun to drive! Yes it’s agile, it feels as though the vehicle is an extension of your thought process and I found myself throwing it around traffic circles or skating around corners and turns just because I could. If you’re looking for a car to put a smile on your face, this one’s a winner!

Manual MX-5 is gone. Is the auto any good?

I really enjoyed the manual MX5, but contrary to some of my colleagues’ opinions, I didn’t have an issue with the auto box. In fact I found it snappy and responsive enough to still provide my driving pleasure. Sadly, it’s not a manual but I guess even Mazda is bowing to international preferences now for auto boxes…. Man, we’ve become lazy! However, having tried the morning commute along the N2 several days of the test week in the MX5, I can attest to the benefits of an auto box in stop start morning traffic.

Same for the soft top. How’s that metal roof?

The metal roof was fine. It makes for a tiny cabin and I didn’t have as much opportunity to drop it as I would have wished owing to testing the car through a week of Cape cold fronts so rain and frigid temperatures definitely kept the roof up.

Who should buy one?

Everyone who wants to still play a little and live a little while driving… but only for singles, DINKS and suchlike. This is NOT a family car.