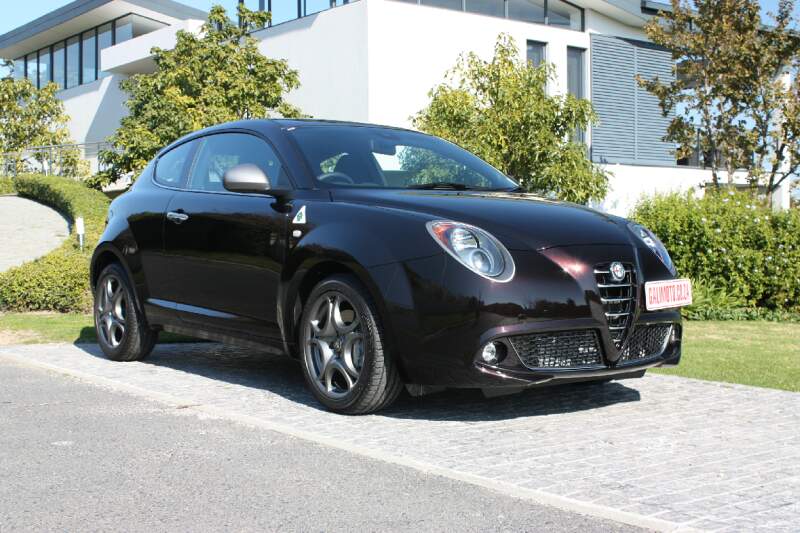 MiTo Quadrifoglio Verde sounds like an item off a posh Italian restaurant menu. In true Mediterranean fashion, the top-of-the-line MiTo turned out to be just as palatable though. Allow me to quickly unravel the various components of its name for you.

Alfa stands for “Anonima Lombarda Fabbrica Automobil” and “Romeo” was the surname of one of the initial company’s directors. MiTo hides the origins of the car, namely Milano and Torino. A “quadrifoglio” is a four leaf clover and “verde” means green, not just in Italian.

I like to think that’s what the four leaves are for, but apparently they arrived as a good luck charm for the race team in the 1920’s and have denoted hot Alfa’s ever since. And make no mistake, a MiTo QV in your rear-view mirror will prove to be a pesky pursuer.

The stylish and somewhat sweet form of the original MiTo was unashamedly dressed with the cloaks of high performance to produce the hyperactive 125kW version you’re looking at now. The very Alfa-ish 4-spoke wheels were anodised, as were the side mirrors and light surrounds.

A small roof spoiler, rear diffuser and deeper front apron complete the exterior picture which looks even more sinister and appetising in our demo’s Etna Black with its crimson pearl metallic flakes. Open the doors and you’re in for even more QV-reserved surprises.

The supportive yet comfy sports seats are covered in a tastefully retro two-tone cloth with a meticulously stitched white Alfa-Romeo logo each. Why don’t all cars have seats like that? Anyway, the top of the dashboard and the door-cards are trimmed in a carbon-fibre weave material and most surfaces exhibit leather or decent plastics.

QV also enjoys black roof lining and some additional toys over the standard MiTo models, chief among which is the Blue&Me / Windows Mobile connectivity with matching satellite buttons on the steering wheel. The RDS radio / mp3 CD player employs 6 speakers with pleasing results and an optional 8-speaker BOSE option for connoisseurs.

Its red-on-black display matches the dual-zone digital climate control and trip computer displays, all of which offer easy and intuitive use. Said trip computer advises the driver on numerous functions including the d-n-a system, a gear change suggestion and multiple trip features.

And what’s a d-n-a? The MiTo pioneered Alfa’s dynamic response system which forces three distinct attitude changes from the engine/throttle: d for dynamic, n for normal and a for all-weather. It does exactly what it says on the box, making the MiTo rather sluggish (and safe) in all-weather mode or razor-sharp when set to dynamic.

This is where the new Multi-Air technology gets to puff up its chest the most, not just at full chat in hooligan mode but also as a low-speed low-emissions torque addict around sleepy suburban roads. Alfa went beyond the on/off variable valve timing principle to offer up to five modes of operation for the cylinder head.

The Fiat-developed 1.4-litre 16-valve turbocharged four-cylinder engine was already a gem to start with but has now morphed into a 2-litre killer. It’s incredibly brawny, very rev-happy and gets the Mito Quadrifoglio Verde past 100km/h in just 7.5 seconds.

Keep your foot in it and it’ll do almost 220km/h; restrain your need for speed and it should be happy with an average of 6-7L/100km, no thanks to its flawless Start-Stop system. The MiTo can, despite the looks, behave itself and quietly obey all speed limits. Not that it would want to, though.

The quad-leaf MiTo’s 170hp engine pairs up with 1145kg, a crisp 6-speed manual gearbox, super-light pedals and electric power steering to make this a proper pocket rocket. In “dynamic” mode the precise steering gains some weight and abuses the sporty suspension and sticky Michelins for supreme point ‘n squirt antics.

The ride might be a bit hard for daily commuting, but its handling and performance more than make up for it and will easily scare off potential owners looking for a versatile hatchback. The finger and nose prints on this MiTo’s windows will belong to petrol-heads and Alfisti.

Cornering traction is the job of Alfa’s Q2 electronic limited-slip differential and anything beyond its grip levels falls in the hands of the vehicle dynamic control with ABS brakes and brake assist, plus ASR traction control). Further safety items include multiple airbags, alarm/immobiliser, adjustable headlights and anti-whiplash headrests.

The MiTo QV costs a highly competitive N$264 000 which includes a 3-year warranty, 5-year service plan and, as a fan correctly pointed out, is an incredible little car that comes with its very own character.