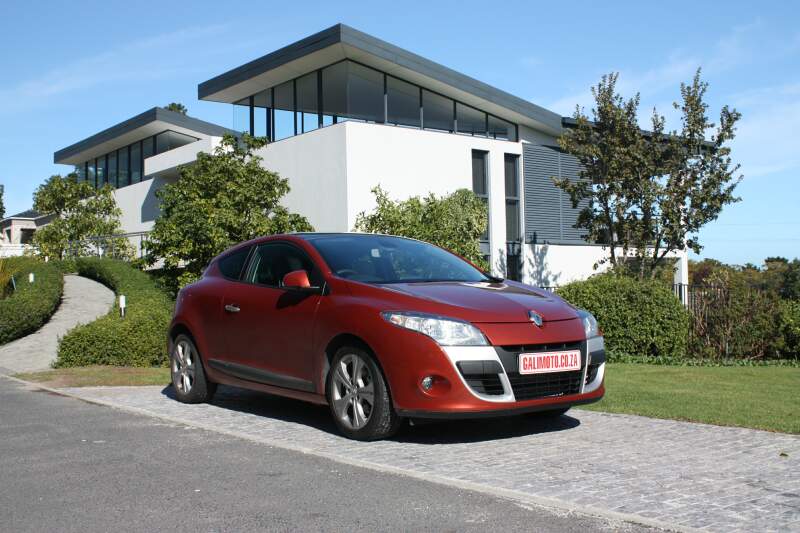 In order to entertain all three of my regular readers (and myself) I have decided to prematurely abuse the whole you-know-what world cup fever and give this review a bit of a soccer feel. So strap on your matching scarf and shirt, get ready to sing the Marseillaise and put your hands together for the brand new Renault Megane Coupé.

Renault South Africa had been frequenting the wrong end of the league table for too long and has thus launched an offensive spear-headed by new players and a severely revitalised commitment to team owners and fans. The Megane Coupé is just another in a long line of new French players.

Slotting in next to its well-received 5-door hatchback sedan team mate, the 2-door sacrifices rear space for improved looks and even more French flair. Our test vehicle was a glorious copper colour and I’ve decided that it’s the only choice for this car. Don’t want to see the others, don’t care.

The burnt metallic orange jersey also highlights the big silver accents on the nose of the Megane Coupé, graces the flanks with its big plastic rub strips and elegantly sloping window line, and covers most of the bulbous rear end that had a whiff of, dare I type it, Scirocco about it.

Elevated rear light clusters and wide hips plus a big plastic bumper insert with fog lights do give the Megane Coupé a look of its own; plus every time I looked at it I discovered more lines and angles, most of them beautiful. It could do with slightly bigger boots though.

The front half of the cabin is identical to the 5-door Megane, displaying modern material and finishes in typical French style. Renault’s three-tier audio/nav/info control systems require lots of practise, and coach will also do well to demonstrate the analog/digital instruments to new owners.

Seating and comfort is high on this new player’s agenda, although the back might get a bit cramped for adults. The high window and low roof line converge into a reasonably deep boot (with full-size spare) and reasonably bad rear visibility. The rear bench also wins the cargo match by folding 2 to 1.

Every soccer fan loves good tunes and I struggle to recall when last I heard such harsh, tinny, flat noises from a car, never mind a premium coupé. There is an optional sound system upgrade, which I sincerely hope our test car DIDN’T feature.

Other optional extras include a sunroof, bigger wheels (good!), ESP with ASR (yellow card, Renault!), a back armrest and metallic paint. I would recommend ALL of the above. And I would suggest purchasing the 1.4 TCE 130 Dynamique model we tested, as opposed to the 1.6 16V Dynamique.

The former has a trendy 1.4 litre in-line 4 cylinder turbo-petrol striker of an engine worth 96kW or, as the name already suggests, 130bhp. The 1397ccm unit also shoves up to 190Nm of torque through assist from a crisp 6-speed manual gearbox to the front wheels.

A few corner kicks worth noting are that the engine struggles a bit when it’s cold, torque is sufficient from 1500rpm onwards, the rev limiter cries foul at the first progressive yellow mark of the rev-counter (approx. 6200rpm), the traction control re-engages itself after a while, and the car has shift icons to advise gear changes.

Yes, I only managed 10.5L/100km, so either Renault was optimistic or my driving style took a dive. The car’s gear change suggestions did nothing to improve my weekly average and while I wouldn’t call the Megane Coupé underpowered, you do have to floor it regularly to move the 1.7 tons along.

Considering the wonderfully balanced and competent suspension setup that produces predictable and high grip levels, minimal body roll and good comfort I would even suggest that it could do with more power. A sleek and stylish coupé deserves it, so when is the loony RenaultSport substitute due again?