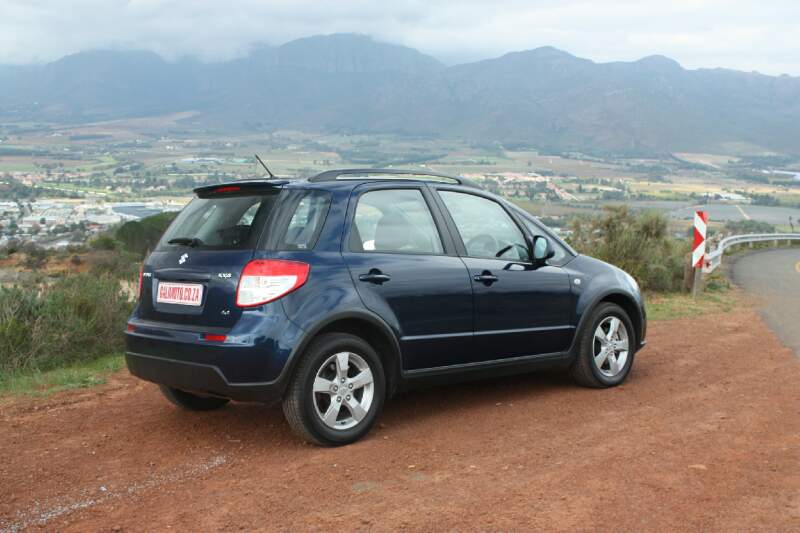 When caught in casual conversation and people discover that you are a motoring journalist, two questions will inevitably pop up. What’s the most impressive car you’ve ever driven and what car should I buy next? The former would be a 1934 Rolls-Royce 20/25 with a Hooper coach and the second answer matters not as they will purchase a Polo or Yaris anyway.

If I had a Dollar for every time I advocated the magnificent Honda Jazz or fantastic Suzuki Swift over the sensible but dime-a-dozen VW or Toyota I’d be at least, oh, $10 richer now. The Jazz often gets dismissed for dodgy looks (what!?) and the Suzuki by asking “they make cars?”

Yes, they do. Brilliant ones. I believe that Suzuki’s motorbike background, much like Honda, translates into small and clever cars that are fun and exciting to drive. Thus it may come as no surprise to you that I thoroughly enjoyed testing the 4WD cousin of Suzuki’s Swift, the SX4.

The car’s proportions and lines are a cheeky rendition of a Swift on stilts, its upsized wheels and black plastics lending a chunky and functional feel to the little Suzi. Although our test vehicle’s dark blue metallic paint was quite fetching, I would aim for a more vibrant colour to contrast these elements even more.

The SX4 offers a quasi-keyless entry system with buttons on the front doors and tailgate which recognise the key in your pocket and unlock said entrance when pressed. They also lock the vehicle when prodded again. You’ll also discover a dummy ignition key which goes on strike if the key is out of its range.

Inside the cheeky Suzuki are fabrics and plastics of pleasing quality and equipment plus switch-gear worthy of its 200-plus asking price. The steering wheel features audio and cruise control satellite buttons, while the RDS radio / mp3 CD sound system employs numerous speakers with satisfying results.

The basic climate control is child’s play to operate and the SX4’s white ‘n blue instrumentation is clean, crisp and quite comprehensive with a central multi-info digital display. All windows and mirrors are electrically operated and the steering wheel is adjustable for reach and height.

The front seats behave much the same and serve occupant comfort well with retractable arm-rests. The boot isn’t massive at 253L but extends to 992L with the rear backrest folded in the obligatory 60/40 arrangement and provides a big secret compartment plus space-saver spare wheel.

I enjoyed driving the SX4 but did find the odd niggle, like its accelerator’s unfortunate on-off response which makes parking and slow manoeuvres a valve bouncing and/or tyre screeching affair. The 40L fuel tank provides a somewhat inadequate range and this particular gearbox often refused access into fifth gear.

On the upside, the 112kW (152hp) 16-valve engine is more than a match for the SX4’s kerb weight of 1 245kg, so performance is definitely on the brisk end of the scale. 190Nm of torque allow for unstressed commuting and easy overtaking, except at highway speeds in top gear where the tall gearing restricts outright performance.

Selecting a lower gear instantly solves any acceleration woes as the lively 2-litre loves to yodel its way to 6500rpm, just be mindful on the up-change as the aforementioned throttle always donates an extra 300-or-so rpm to any gear interaction. Whoop-whoop, rev limiter.

Restrain such hurried urges and the SX4 claims to sip an average of 7.6 L/100km; a figure that seemed utterly plausible if you throw a fair bit of highway driving into your commuting mix. Whereas no 0-100km/h times were quoted, the manufacturer’s top speed claim of 184km/h seems quite conservative; just avoid sixth gear.

SX4’s steering isn’t the sharpest tool in the shed, but its handling and cornering abilities are still commendable considering the higher centre of gravity and bigger wheels over its little sister Swift. This AWD model provides a button to switch between 2WD, Auto and 4WD.

Low-range and differential locks are missing, but the SX4 is armed with ESP and EBD which will do their utmost to maintain traction to the selected 205/60R16 tyres. A spot of light veld driving or soft sand should be a breeze for the four-legged Suzi and the “Auto” feature proved its worth on sandy and/or slippery roads.

You have a choice of eight colours which unfortunately don’t include yellow; because that’s Suzuki’s traditional motorbike colour. Pity.