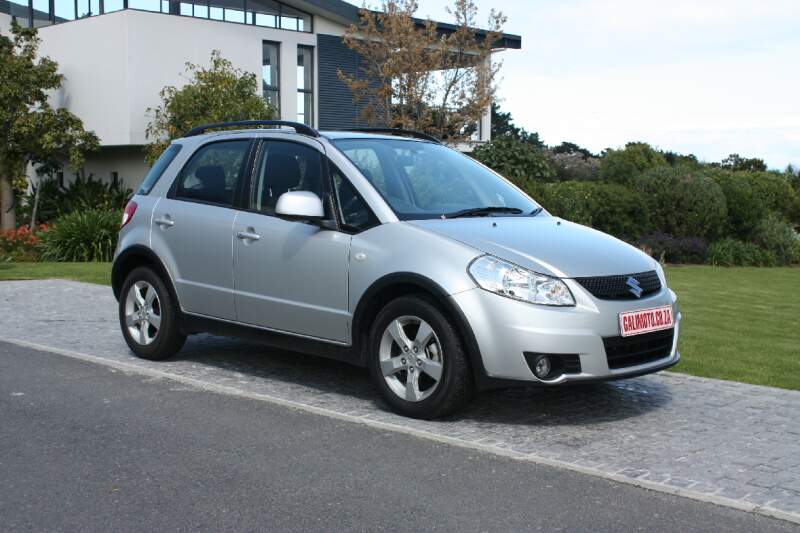 In a few minutes it will be 10h10 on the 10th of the 10th 2010. Or ’10, if you like. As I failed to arrange a wedding, birth, divorce or other memorable event for this significant date it will have to mark the creation of my Suzuki SX4 CVT review.

The car in question isn’t very phased with my numerological obsession and will simply pass through the momentous minute by quietly standing outside my house. As I’ve reviewed (and described) an SX4 before, here follows a severely shortened depiction of the little Suzuki.

Cheeky, chunky, functional, supersized Swift. As with the Nissan Qashqai, this wannabe 4×4 is also available in pure 2-wheel-drive form with a choice of transmissions. Let me quickly run you through the current SX4 line-up to clear things up:

We’ve tested the four-by-four version before and, despite moderate off-road abilities and a smallish fuel tank, quite liked it. Happily, our CVT test car had no intention of bashing the bundus and could thus be tested on the merits of being a trendy cross-over pretend-4×4 city slicker.

I’m sure the car’s design won’t win it any beauty pageants, but I grew quite fond of its exterior and interior looks. The cabin isn’t overly luxurious or impressive; I’d rather choose words like reasonable, spacious, uncomplicated and sensible.

The steep asking price is somewhat justified by an impressive list of equipment, but more of that later. Suzuki have surely seen the bright eyes of suburban 4×4 enthusiasts and added a dash of convenience to this kerb-bashing critter with a CVT (continuously variable transmission).

A CVT is a type of automatic gearbox; and after hours of digital research I can report that I’m even more confused about its workings than I was before. In essence it doesn’t have any cogs (=gears) but uses any number of varying surfaces (cones, belts, pulleys, rollers) to create almost infinite ratios.

Most CVT’s can create artificial gear ratios (the SX4 offers six) but their strength lies in constantly varying the ratio to adapt to the engine’s power output and the driver’s demands. Positive side-effects of this technology are constant power delivery without shifts, reduced consumption and apparently increased engine life.

Negative side-effects are a hair-raising engine noise that sounds like the driver is old and/or drunk, delayed maximum response (no to full throttle) and artificial gears that still appear to have some sort of variation in their ratio.

The CVT isn’t a new invention, some dude called Benz patented it in the 19th century, but due to its perfect auditory imitation of a slipping clutch most people tend to shy away from it. They don’t have to. Really, come a little closer. The SX4 won’t bite.

Full throttle sounds absolutely dreadful, but luckily the 2-litre motor never really needs 100% around town so the smooth CVT can drag the car along on its impressive torque figure. Pedals behind the steering wheel select those aforementioned virtual gears, but I wouldn’t really bother.

Same with the SX4’s handling, which can never really be exploited with the irritatingly indefinite gear ratios. No, sporty drivers best look elsewhere. Older drivers and drivers who are old at heart may step forward and meet their new best friend… the SX4 CVT is fantastically easy and comforting to drive.

Furthermore, you will find ABS brakes with EBD and ESP, an alarm and immobiliser, front airbags, a 253L boot which extends to almost 1000L with the rear bench folded, radio/CD/mp3, multi-function steering wheel, cruise control and crisp dials with a comprehensive trip computer.

Your peace of mind should be assured by a 3 year warranty and a 6 year 90 000km service plan with 15 000km service intervals. And best of all, the sound system is loud enough to drown out the occasional whine of the engine labouring away to a constant gear ratio. Happy 10/10/10, everyone.