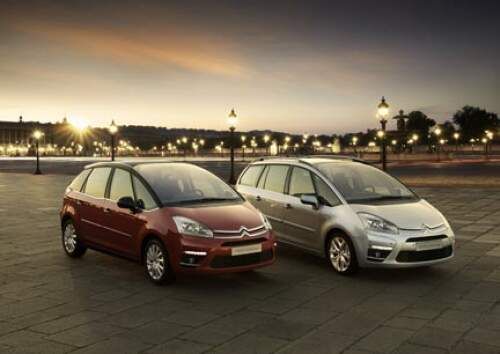 Captain’s log, stardate 48869.7 – near the constellation Gardens we encounter an abandoned non-hostile alien craft and beam it aboard for testing. The vessel identifies itself as a C4 Picasso by craftmaker Citroën, from the planet Saint-Quen in the Seine-Saint-Denis region of the France galaxy.

Its hull and exterior execution conform to current standards; the rear bay doors are unevenly shaped but grant sufficient access to most sentient life forms. Research reveals the existence of additional models, a bigger (Grand) and a smaller (C3) version, all built predominantly for recreational transportation of humans.

C4 Picasso exhibits conventional technology but decidedly alien controls and interior design. Our chief tester was unable to locate the release mechanism of the vehicle’s electronic docking brake for over a minute. Quite ironically, the unit releases itself and also offers a hill hold assistant.

The bridge or main vessel controls are positioned in the accepted area but individual items are placed and constructed in a manner not familiar to homo sapiens. The captain’s wheel is circular but its center section with airbag, hailing device, multiple buttons and rolling knobs remains stationary.

The reason or purpose for this design evades us but most testers agreed that it doesn’t detract from piloting duties and offers the added benefit of completely stationary buttons. The wheel is attached behind the odd center unit with two silver spokes reminiscent of the maker’s logo.

Overall visibility is superb thanks to big glass surfaces, also at both sides of the generous dashboard. The front windscreen reaches further up than in most vessels, lending an airy and spacious feel to the cockpit. Retractable sun visors allow both front occupants to adjust the amount of sunlight into their area.

Instead of utilising traditional dials and needles for popular vehicle status instrumentation, Citroën has chosen an unusual unit from the Dåktåklækpæk catalogue and moulded it into the center of the dash. This frees up space for additional covered storage bays (with silver rimmed buttons) on either side.

Further items that may confuse or occupy human users for hours are the concealed radio and comprehensive board computer, both of which display their efforts in the loony center instrumentation. The front seatbelt catches are a little on the low side.

Gear, clutch, brake and throttle controls follow accepted norms, their operation is super-light and users have the choice of altering speed in one reverse and five forward stages. The C4’s primary drive unit is an internal combustion engine with four cylinders totaling 1.6L capacity.

Maximum power outputs are 88kw / 120hp / 160Nm and permit the craft to accelerate past 100km/h in 12 seconds, reaching a terminal velocity of 0.00000000000197 light-years or 186km/h. Power is provided to the front wheels in a relatively smooth fashion, although the unit is quite noisy near its operating ceiling.

The vessel only has one fuel tank of 60L and can only operate on a refined earthbound fossil fuel called gasoline or petrol. Average combined consumption is claimed at 6.9L/100km and CO2/km emissions at just 159g. Cargo capacity can be extended from 500L to 1734L by altering the rear seating configuration.

Our testers concluded that the Citroën C4 Picasso is a highly alternative choice to the otherwise mundane attempts at carting around a human family. As is customary for products from the region France, it provides predictable and highly comfortable travel for a crew of five.

Fleet Admiral Heese with his vast knowledge of French vessels immediately confirmed that this brand of motorised crafts is known (and loved) for their unconventional approach and smooth progress. Its price of between N$198,742 and N$220,672 is equally admirable.

Unfortunately we can’t report on the longevity or maintenance of the vehicle, given the considerable distance from its home planet. Its solid construction and pleasing materials/quality should counter any doubts, as will the 3-year / 100,000km warranty and 5-year / 100,000km service plan.